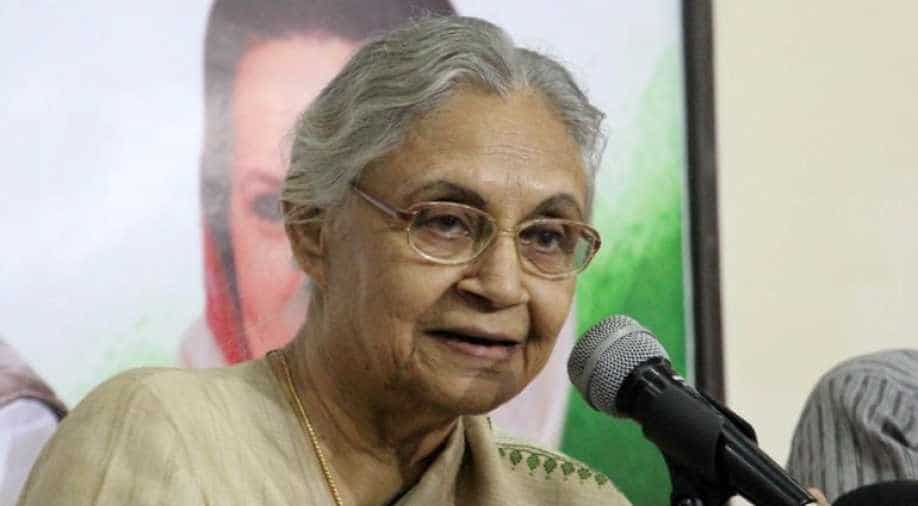 She was one of the few leaders to privately admit that the party is being portrayed as anti-Hindu and if not corrected, heavy losses would be sustained during Lok Sabha polls.

How to encapsulate the life of someone I knew as a friend of my father and whom I later covered in my professional capacity as a journalist? One of the earliest memories I have of her was of fleeing from the scene after breaking glass windows of her South Avenue flat (we were neighbours) and never getting pulled up for the trespass.

After she moved to Nizamuddin, and we moved to Noida, my father and Mrs Dikshit maintained their habit of walking in Lodhi Garden, something Mrs Dikshit’s niece and I used as a channel to exchange study notes - we both were students at the department of sociology in the Delhi School of Economics.

To my knowledge, she never resented her as a courier of academic notes although my father never let me hear till the end of it. As a journalist, she never once talked down to me, something she was well within her rights to do with someone who was so much younger to her in age and experience.

In all her interactions, she brought with her Punjabi guts - as she was born as Sheila Kapoor in 1938 in Kapurthala-, style of being a Delhi girl - she graduated from Miranda House - and an awareness of statecraft that she got from her husband Vinod Dikshit who was an IAS officer who died early and that of her father-in-law Uma Shankar Dikshit who increasingly relied on her in his later life to channel his political activities.

Her entry into politics followed the early death of her husband, with Mrs Indira Gandhi encouraging the move. Though many remember her only as the longest-serving Chief Minister of Delhi, Sheila Dikshit also served as the Minister of State in-charge of Prime Minister’s Office and Parliamentary Affairs during Rajiv Gandhi’s tenure.

Delhi's large infrastructure is Sheila Dikshit’s contribution. Delhi changed during her tenure. She courted her share of controversies too. The Commonwealth Games became a spot on her untarnished career and created a vibrant atmosphere for an outsider like Arvind Kejriwal to oust her from her sparkling three-term tenure as the Delhi CM. She even lost her seat.

Despite all of it, she never said no to any assignment, including becoming part of Uttar Pradesh campaign in 2017. Though Rahul Gandhi changed the goal post midway, Sheila Dikshit did not crib in public. Similarly, in 2019, Sheila Dikshit took charge of the Congress in Delhi. Despite many leaders differing from her, she did not give in to them.

In my numerous interactions with the Congress veteran, I realised that she would never go with an alliance with the Aam Aadmi Party. The alliance never happened in Delhi. The fact that Sheila Dikshit had to be recalled twice from her days of retirement shows that no junior leader in Delhi was able to create a stature equal to her.

Sheila Dikshit also knew what ails the Congress today. Like many loyalists, she remained quiet in public, only to talk about it in the private. Today is not the day to talk about those private conversations but as a journalist, I can vouch that she had started to speak of massive organisational problems right after 2012 when Congress, under Rahul Gandhi, could not resurrect the party in Uttar Pradesh.

She was one of the few leaders to privately admit that the party is being portrayed as anti-Hindu and if not corrected, heavy losses would be sustained during Lok Sabha polls.

Dikshit was also a keen observer. She was one of the few people to privately talk about the problems which the Gandhi family was set to face in the wake of a relentless campaign by Narendra Modi.

Sheila Dikshit reminds me of a gentler era of politics where it was easy to walk into her Nizamuddin East flat without caring about ideological moorings.

The old lady knew how to listen and appreciate a good conversation. The conversations could vary from arts, politics to sheer Delhi gossip. She would never make you feel naïve or young as she had perfected the art of listening. She loved life, food and Delhi.

I will miss Sheila Dikshit.