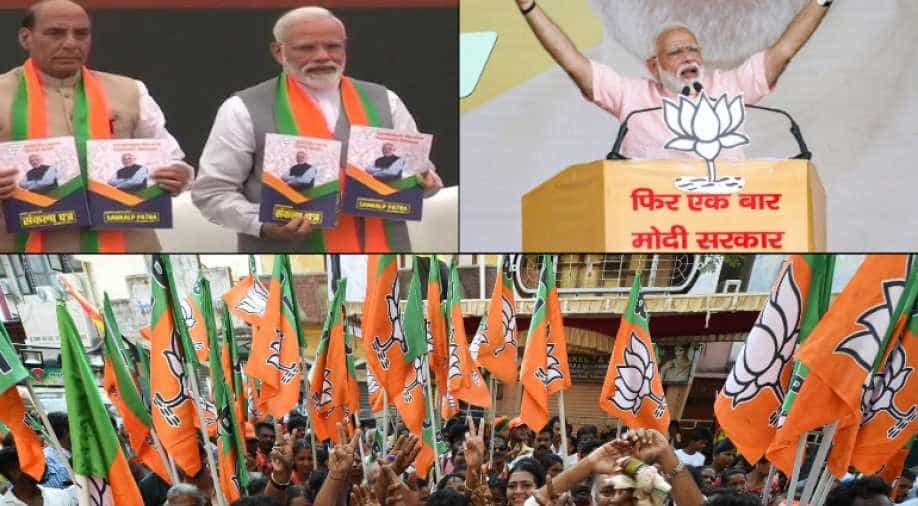 Led by Prime Minister Modi, BJP has made nationalism and national security, apart from development, the fulcrum of its poll narrative.

The BJP’s vision document for the 2019 elections is a cocktail of the old and the new, as well as an assertion of certain narratives related to national security that have resonated with the people in recent months. The old has, among other things, its commitment to the construction of a Ram temple in Ayodhya in a lawful and harmonious manner. The new has a roadmap to make India a five-trillion-dollar economy, a massive push to infrastructure, further booster shots for the Make in India campaign, employment generation ideas and a more simplified Goods and Services Tax regime. But it is the party’s position on national security which stands out, primarily because both Prime Minister Narendra Modi and his senior party colleagues have made it a key election issue. The other reason is that the BJP’s commitment in the 'Sankalp Patra' on this subject contrasts sharply with that of the Congress’s promise in its manifesto.

The BJP’s stand on Article 370 and Article 35A, which are exclusive to Jammu & Kashmir, have been known for long. But the underlining of its commitment to scrap the two provisions becomes especially important in an election season. The party seems to have come around to the view that one of the ways to effectively tackle the problems that the state keeps throwing up at regular intervals is to divest it of the special provisions which were supposed to have helped integrate it better with the rest of India.

The other reason for the BJP to give the issue prominence in its vision document was to put the Congress on the defensive. The Congress had in its manifesto promised to retain Article 370. It’s position on Article 35A too is that of maintaining the status quo. However, the popular perception nationwide seems to be veering towards a rethink on these provisions, and that fits well with the BJP’s overall nationalist agenda.

The BJP would be pleased with the response after it set the cat among the pigeons. Both the state’s leading parties, the National Conference and the Peoples Democratic Party have reacted strongly against the promise and warned that any tinkering with the two provisions would result in India losing hold over Kashmir. This is playing straight into the BJP’s hand since the party has for long been maintaining that these parties promote soft separatism and are not just reluctant to act against separatists but also back them when the Centre acts against them. There is more than a grain of truth in the BJP’s allegation, and taking the matter to the people helps the party burnish its nationalist credentials.

One may wonder if such strong statements do not harm the BJP’s prospects in Kashmir valley. The first fact is that the BJP has little electoral prospects in that region. The second fact is that there is a constituency beyond Kashmir in the state — Jammu, for instance, where the BJP has a strong presence and which would be more than satisfied with the party’s position on the issue. But even more importantly, there is the larger constituency beyond the state itself which aligns with the BJP’s thoughts on the matter and can help the party garner more seats nationally.

The 'Sankalp Patra' also promises to strengthen the country’s Armed Forces, have zero tolerance to terror, and continue to give a free hand to the forces to deal with terror. Read alongside the Congress manifesto which has spoken about reviewing the Armed Forces (Special Powers) Act, the BJP’s vision document virtually endorses AFSPA and leaves the issue to be decided in consultation with the Armed Forces.

In confirmation of its belligerent stand on anti-national activities, the vision document does not, as the Congress manifesto does, speak of scrapping the sedition law. Here it’s important to note that the vision document commits the party to “taking necessary and effective steps against Left-wing extremism to eliminate this menace in the next five years”. The connection cannot be missed, given that many Maoist sympathisers have been in recent months facing the heat for their support to Left-wing extremism, and the cry for charges of sedition to be slapped against them have grown from Right-wing elements.

The BJP’s aggressive stance, which has been reflected in the Sankalp Patra, should not surprise those who have been following the party’s election campaign. Led by Prime Minister Modi, it has made nationalism and national security, apart from development, the fulcrum of its poll narrative. The Congress has willy nilly extended a helping hand by its soft attitude, with senior Union Minister Arun Jaitely quipping that the BJP’s vision document had not been crafted by any 'tukde-tukde' group. The party clearly believes that it has the upper hand when it comes to keeping the focus on national security and nationalism.