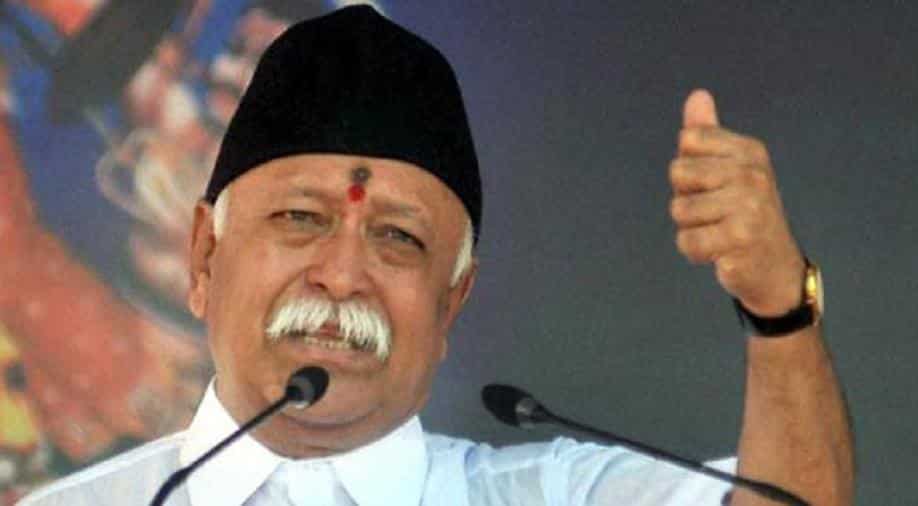 Bhagwat was also unsparing in his self-criticism of Indian society, identifying “ignorance, the dearth of development and amenities, unemployment, injustice, exploitation, discrimination and absence of sensitivity and sanity” as root causes of our sorry state.

Long back, Dr Keshav Baliram Hedgewar popularised the celebration of six Indian festivals as part of the Rashtriya Swayamsevak Sangh’s calendar. Of these, Vijayadashami, which marks the triumph of good over evil is possibly the most important. On this day, not only did the Mother Goddess Durga slay the asura Mahishasura but, it is believed, Sri Rama also killed Ravana. In the Mahabharata, this is also the day when Arjuna single-handedly defeated the Kaurava army. No wonder, the Vijayadashami address of the RSS chief is keenly awaited.

This year’s speech was delivered on Thursday, October 18, by RSS Sarsanghachalak Mohan Rao Bhagwat at the Reshimbagh Maidan, Nagpur. Bhagwat began by recalling how we would soon celebrate the 550th Prakash Parv or anniversary of Guru Nanak. Bhagwat stressed how Guru Nanak opened a “new path of self-enlightenment” by a “spiritual practice commensurate with the times.” He created a new sense of oneness in a society beaten and brutalised by “cruel, intolerant, savage foreign invaders.” We need not forget that the invader in question was Babar, who also destroyed the Ram Janmabhoomi Mandir. When Babar conquered Punjab, it is recorded that Guru Nanak was himself taken captive. Bhagwat also acknowledged the Sikh Guru parampara: “It is his [Guru Nanak’s] legacy that gave the country a magnificent and majestic tradition of 10 gurus who removed our state of penury and inferiority.”

Next Bhagwat remembered Mahatma Gandhi, whose 150th anniversary we are celebrating. Gandhi, according to Bhagwat, provided “the political foundation of truth and nonviolence to the independence movement of the country.” He was one in a long line of “several great personalities of this country” who inspired “continuous enlightenment” and strengthened our “inclusive culture, based on love and truth.” Gandhi “inspired the common man of the country to come out of his home and stand firmly with a moral force against the British oppression.” Bhagwat immediately switched to the Jallianwala Bagh massacre, which took place on Vaisakhi 1919, when soldiers of the British Indian army killed nearly a 1000 unarmed men and women.

Nearly 71 years after our independence, our struggle to regain our self, our “sva,” is still far from over. Indian social and cultural life is yet to be fully decolonised. To preserve our svaraj or independence, Bhagwat noted, both defence and economic security are absolutely essential. He emphasised security at the border, improvement of infrastructure, employment benefits to our Armed Forces, and self-sufficiency in defence production. But there are in our midst elements “who challenge the law, Constitution and sovereignty of the country.” They must be sternly dealt with. “Incessant vigil” by state police and paramilitary forces is required, he added.

Bhagwat was also unsparing in his self-criticism of Indian society, identifying “ignorance, the dearth of development and amenities, unemployment, injustice, exploitation, discrimination and absence of sensitivity and sanity” as root causes of our sorry state. To end inequality and social disharmony, inclusive development was the answer. This meant implementing various policies to ameliorate the weaker sections, including SCs and STs. On the other hand, “urban Maoists” are taking advantage of social tensions and divisions. Their “cohorts” are “already established in social and other media, intellectual circles and other institutions”. Such anti-national elements are “experts in freely using deceit and poisonous provocative language to make their vicious campaign even more potent.” Bhagwat called this sort of ideological warfare “Mantrayuddh”.

Why is it that in independent Bharat, our rulers are yet “to make the administration people-centric”? Obviously, “political freedom” without all dimensions of our national life “reorganised on the basis of ‘sva’ (self)” is not complete. That is why the rebuilding of the Ram temple was so important. Its main aim was to restore the self-esteem of the people. But all elements of society needed to come together to accomplish this task.

While the judicial process would take its course, “it is in nobody’s interest to test the patience of the society without any reason”. Therefore, if needed, the Government could consider legislation as a way to solve the dispute. Similarly, on Sabarimala, the sentiments of the people had to be considered; just judicial intervention would not be sufficient. To adapt and adopt our “sva” to the times was how to make Bharat great once again, he said.

Listening to the Sarsanghchalak, I was suddenly struck by how the RSS, pilloried and castigated for decades for being hard line and fanatical, today represents the moderate face of Hinduism. There are many groups, even among middle-class Hindus who, impatient and dissatisfied with the BJP government, blame the Government for doing little for Hindus. Whether Bhagwat was addressing such groups or not is unclear, but he did appeal for 100 per cent voting “keeping in mind national interest as supreme”.