Islam has become the handmaiden of jihadist-Salafism 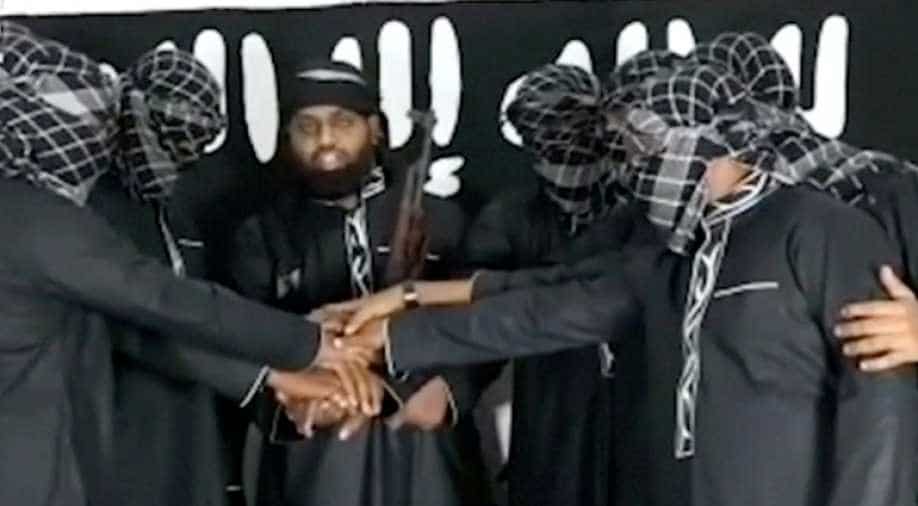 Mohamed Zahran (face uncovered) is seen with a group of men purported to be the the Sri Lanka bomb attackers at an unknown location in this still image taken from video uploaded by the Islamic State's AMAQ news agency April 23, 2019. Photograph:( Reuters )

Today, radical Islam’s war has spanned throughout the world, not just against Christians and Jews in the West, but also against Hindus, Buddhists, indeed all non-Muslim ‘infidels’

On May 19, 2009, then president of Sri Lanka, Mahinda Rajapaksa, clad in his traditional white sarong and shirt, solemnly averred before the Parliament: “The writ of the state now runs across every inch of our territory … we have completely defeated terrorism.”

Photographs of the corpse of rebel leader Velupillai Prabhakaran flashed across the local newspapers on the same day, signalling the end of a long and internecine civil war, which had pitted the Liberation Tigers of Tamil Eelam (LTTE) against the security forces of the government of Sri Lanka since 1983.

Nearly a decade since then, Sri Lanka is in ferment again following the Easter Sunday bombings that killed over 250 people giving rise to concerns about the Islamic State’s expansion into South Asian and re-emergence after its near-total decimation in Iraq and Syria.

The message that the destruction of the physical caliphate does not extinguish the ideological threat of Islamic terrorism, must not be lost on anyone, as radical Islam is no longer a fringe element seen as an outlier of the Muslim world.

As per reports, the Lankan government has ordered complete prohibition on all types of face covers including burqas, which followed a social media blackout for fear of provocation and a call for retribution.

The entire Muslim community in Sri Lanka — constituting just about 10 per cent of the population — are fearful of becoming easy targets of reprisals in an atmosphere of paranoia and distrust.

The Mawalagatta Jama Masjid, for instance, held prayers and put out hoardings saying,”There is no place in Islam for extremism”.

As the authorities suspect members of two little-known groups —National Thawheedh Jamaath (NTJ) and Jammiyathul Millathu Ibrahim — of carrying out those attacks, with Islamic State claiming responsibility, it is clear that the attacks were primarily directed against Christians.

With the rise of such incidents, the real danger is the popular tendency to classify Muslims based on Islamophobic jargon: “moderate” Muslim as against Muslims, who are possibly violent and “radical”.

The perception that moderate Muslims feel a reflexive and religiously-mandated solidarity with other Muslims, no matter how barbaric their commitments, get firmed up by their silence, perhaps out of fear.

Sam Harris in a book titled “Islam and the Future of Tolerance: A Dialogue”situated the Muslims in several concentric circles with groups like the Islamic State, al-Qaeda, al-Shebab and the Boko Haram at the centre, who are eager to “kill infidels and apostates” and be “martyred in the process”.

It is circumscribed by a larger circle of Islamists who are more politically motivated, but appear less eager “to kill and be killed”.  It is encircled by a wider circle of Muslims who probably support jihad and Islamism —“financially, morally, or philosophically” — but are careful not to sully their hands.

All the three circles are encompassed by a much larger circle of so-called moderate Muslims, who possibly do not subscribe to the view of the Islamic State, who may not be quite secular, but who want to live by modern values.

Millions of truly secular Muslims bear the brunt of the social opprobrium for not raising a voice against the excesses of Islamic terrorism and not expunging violent interpretations of the Koran and thus are complicit in the crime of their radical co-religionists.

The IS had recruited thousands of youth from South Asian nations such as Afghanistan, Pakistan, India and Sri Lanka who, hunted down from Iraq and Syria, are now returning to their home countries.

Today, radical Islam’s war has spanned throughout the world, not just against Christians and Jews in the West, but also against Hindus, Buddhists, indeed all non-Muslim ‘infidels’.

The radical Islamists have been attacking other denominations within Islam itself. The long list of Islamist organisations includes some with memberships of just a few dozen and others that count thousands of adherents.

Such movements exist in virtually every Muslim country, and they often either draw inspiration from or are linked to one another.

While the rest of the world is held hostage to fear, a great religion becomes the handmaiden of a puritanical and jihadist-Salafism.