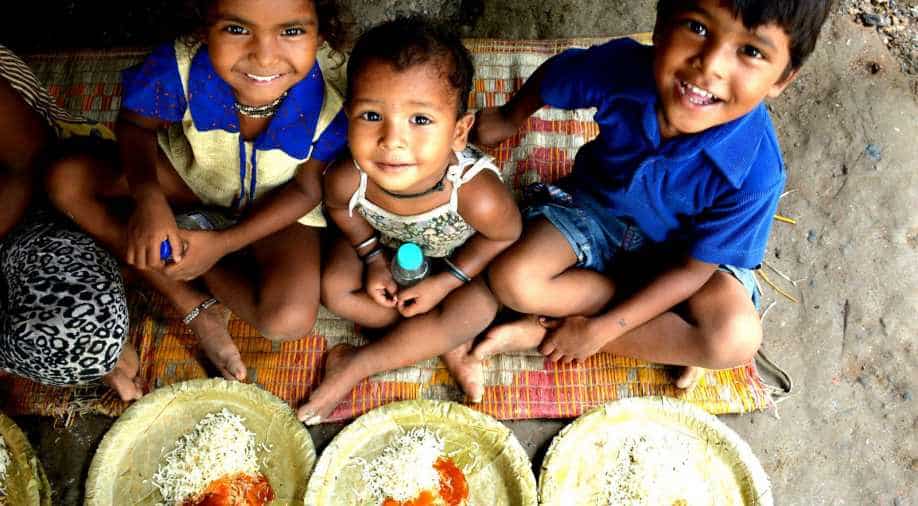 Children in West Bengal happy after getting a free meal from FEED Photograph:( WION )

Only about 10 per cent of children in the age group of 6 to 24 months in the country currently receive an adequate diet.

The Niti Aayog’s recent report on ‘Strategy for New India @ 75’ rightly recognises that the multidimensional determinants of undernutrition are inadequately reflected in policymaking. It argues that there must be convergent action with annual health, nutrition and sanitation plans being made in an integrated manner for all districts. In the case of Integrated Child Development Services (ICDS), which is the main programmatic platform through which nutrition outcomes are to be achieved, the report finds that its focus on the first 1000 days of the child’s life is inadequate.

It argues that while children under 2-3 years of age must be given highest priority in nutrition interventions, much of the ICDS interventions are focussed on the delivery of services to children in the age group of 3 to 6 years. While the diagnosis is not entirely wrong, the recommendations at the end of the chapter do not show an adequate understanding of what needs to be done to correct this situation.

Researchers and activists have been making the same point for many years now. There is a consensus that there is a need to better reach the younger child. In the current model of the ICDS, where it is largely centre-based with part-time workers, this is not possible. The FOCUS report, 2006, recommended that every anganwadi centre must have two workers, with the primary responsibility of the second worker being the care of children under three years of age and pregnant and lactating women. In a number of subsequent reports, not just the Right to Food campaign but even UN bodies and the Planning Commission have made similar recommendations.

There has been a tremendous expansion in the ICDS following Supreme Court orders in 2006 directing that anganwadi services be universalised. The number of anganwadi centres in the country grew from about 6.5 lakhs in 2006 to almost 14 lakhs currently. The coverage of children under six receiving any ICDS services increased from 28 per cent children in 2005-06 (NFHS-3) to 54 per cent in 2015-16 (NFHS-4). However, although there has been this quantitative expansion in the programme as much attention has not been paid to improving the quality as well as addressing the design gaps.

One of the design issues, as discussed above, is enhancing the outreach to children under three. The Niti Aayog report suggests that this must be done through home visits to be conducted by accredited social health activists, a second auxiliary nurse midwife or community infant and young child feeding counsellors. This means the requirement for additional human resources is being recognised and needs to be provided for in the budgets for the ICDS.

While there was an increase in ICDS budgets commensurate to the higher number of anganwadi centres, throughout the last five years the central government’s allocations for ICDS has been stagnant around Rs.16,000 crores a year in nominal terms and declining in real terms.

The NFHS-4 finds that only about 10 per cent of children in the age group of 6 to 24 months in the country currently receive an adequate diet. While this requires counselling on infant and young child feeding, for the children in this age group it is also equally important to ensure the presence of an adult caregiver as well as the availability of energy-dense diverse foods. A number of NGO experiences across the country have shown that community-run daycare/crèche services can play a significant role in reaching out to children under two years of age and this has an impact not health and nutrition outcomes as well. One of the reforms in ICDS must, therefore, be to convert anganwadis into anganwadi-cum-crèches so that they can be accessible to younger children as well. Different models of crèches will have to be thought of depending on local contexts.

The problem with the ICDS is not that it is food-centric to the neglect of everything else rather than it is under-resourced and lacking investments – financial as well as technical and political. The ICDS is meant to provide pre-school education as well as health and nutrition services and without adequate infrastructure and human resources, achieving these twin objectives is impossible.

Therefore, while on the one side when nutrition is on the agenda, the ICDS is blamed for its excessive focus on older children and preschool; when preschool is the issue being discussed, the problem with ICDS is that it is preoccupied with nutrition! This can be avoided if we keep the child in the centre and not the scheme.