The Quad should accord recognition to Taiwan 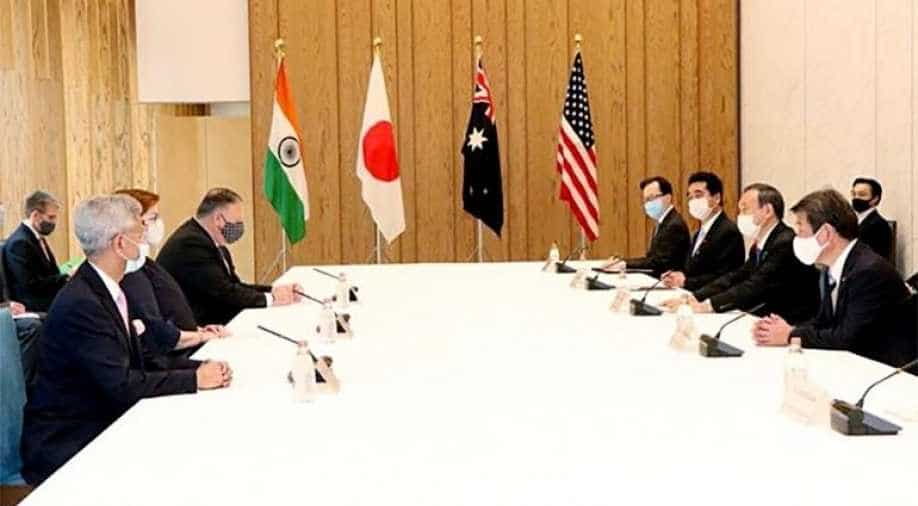 Delegation of Quad nations during a meet in Tokyo, Japan Photograph:( ANI )

While China has made spectacular progress in industrial and economic growth and military power, this 'progress' has only caused alarm in many countries who are concerned about the aggressive posturing of China.

The foreign ministers of Japan, Australia, USA and India (Quad) have now met in Japan for Quadrilateral Security Dialogue to discuss future strategies and plans to ensure security in the Asia-Pacific Region.

Quad is an anti-China front and China clearly knows this, just as everyone else in the world. Quad should therefore be causing anxiety to leadership in China since it is for the first time that four nations have formed a front to checkmate the aggressive and expansionist ambitions of China. While only four countries are members of Quad, a number of other countries like Vietnam, Philippines, South Korea must be wishing QUAD well and watching the developments with interest.

While China has made spectacular progress in industrial and economic growth and military power, this 'progress' has only caused alarm in many countries who are concerned about the aggressive posturing of China

China has already 'pocketed' Pakistan and North Korea. Moreover, China has a vice-like grip on countries like Sri Lanka, Bangladesh and Myanmar. It has managed to do so by giving loans and getting strategic positions in these countries.

China’s occupation of Tibet is now total and massacre of thousands of innocent Tibetans by China has been virtually ignored by UN and its member countries.

China is occupying thousands of kilometres of Indian land and is claiming more. China’s aggressive claim with regard to the South China Sea and Senkaku islands clearly shows its  expansionist intentions.

China’s One Belt One Road (OBOR) scheme is part of its strategy to dominate the entire world. In such a situation it is important that China’s aggressive march be halted and that China renounces its expansionist approach.

It is still not clear as to what would be the strategy of the Quad. Will be restricted to defensive movements?

Member countries of the Quad should realize that defensive strategies would only give more time to China to fortify its expansionist plans. If Quad ends up just as a discussion forum, China will have the last laugh.

Chinese government is a totalitarian regime under the control of coterie of leaders and certainly, it is not a representative government of the people of China.

It is necessary that Quad should work out a time-bound action plan to resist China’s aggression.

The first step in this direction should be to recognise Taiwan and take measures to ensure that Taiwan becomes a full-fledged member of the UN. China has been threatening to invade Taiwan for a long time and it may do so at any time in future. These plans must be thwarted.

China has occupied Tibet for over six decades now and the world is silent. China is suppressing freedom in Hong Kong and the world is simply watching. Encouraged by such silence, China may think that occupation of Taiwan may also get silently 'approved' by the world. China may also think that it can brush aside sounds of protest from 'paper tiger'. It is therefore necessary for the Quad to not let itself become one.

History provides many examples that drive home the saying that offence is the best defence. This is true more so when the cause is just.

Taiwan was part of China. When communist leaders launched an aggressive war against the then leadership of China, Taiwan became a separate region. Communist leaders then occupied the mainland. Hence, Taiwan deserves world recognition.

Second strategy of the Quad should be to work towards liberation of Tibet and undo the historical harm done by ruthless and totalitarian Chinese government. World and the UN have a duty to ensure that Tibet gets it’s independence back.