Opinion: Is the West weaponising Ukrainian nationalism to checkmate Russia? 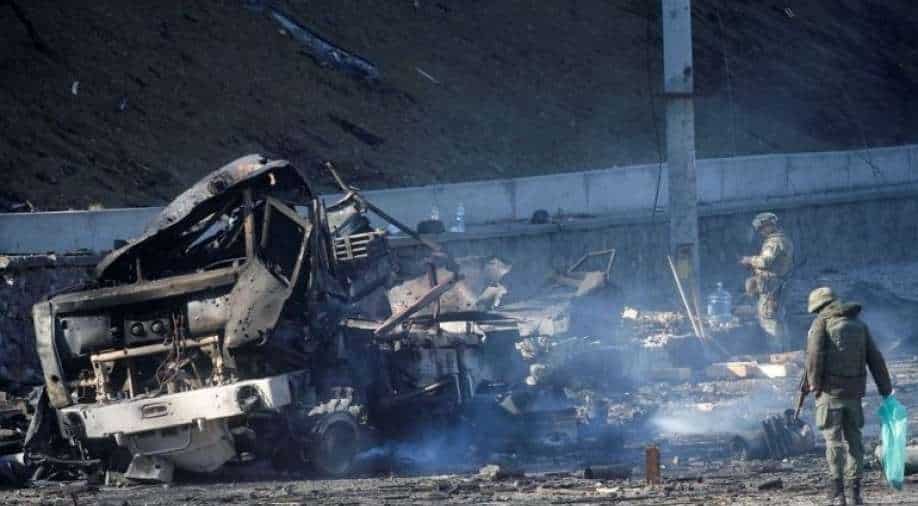 If the war gets prolonged further, Ukraine will be destroyed physically, Russia will suffer punitive financial cost, EU will lose long lasting peace and energy security, and the entire world will suffer economically

The conflict in Ukraine has rolled over to fourth week of devastation, resulting in over three million refugees, numerous military and civilian casualties, and intermittent reconciliatory tones of hopeful dialogue, alternated with rhetoric from opposing sides to continue fighting.

While the West continues to give standing ovations to President Zelensky's emotional speeches and responds with a package of military hardware and funds, it is pouring fuel to the fire by prolonging global agony and encouraging Ukrainians to fight to the death in order to weaken Russia.

While NATO can claim that Ukraine is not part of it; hence it is not obligated to join fight against Russia through ‘No Fly Zone’ as repeatedly requested by Zelensky, risking the potential to trigger Third World War/Nuclear war, but NATO is very much part of the conflict through economic war, information war, diplomatic war, political war and other instruments of non-contact warfare.

Big power contest continues with no concern for humanitarian disaster

Any offensive into another sovereign country has disastrous consequences for the people and must be condemned, whether it’s current Russian offensive in Ukraine or earlier NATO invasions in Iraq and other parts of MENA.

With few security guarantees, this was avoidable, but the big power contest continues to spiral it, with display of heroics of President Zelensky, failing to read the extent, depth, and impact of Western support and President Putin's resolve, least realising that the nationalism and his peoples resolve is being used as an instrument to prolong an unwinnable, proxy war, leading his country to disaster.

The war of narrative seems getting dangerous with references to nuclear, biological and chemical dimensions in heated exchanges/allegations.

How has battlefield ‘Ukraine’ shaped up after three weeks?

After three weeks, the shaping of battlefield by Russians seems to make strategic sense, but at a very heavy cost, which is increasing consistently.

Russian main offensive is towards Kyiv, which is the Centre of  Gravity to achieve political objective of imposing no-NATO diktat on its political leadership or force a regime change, through the shortest route from Belarus.

The complete isolation of Kyiv is yet to be achieved and the political consolidation is not in sight. Given the spirit of nationalism among Ukrainians, stoked by Zelensky's sentimental appeals and bolstered by western information warfare, Russians need to moderate their political objective from regime change to imposing a no-NATO agreement with Zelensky, because any pro-Russian puppet regime, even if imposed, is unlikely to survive.

The Russian military aim to demilitarise Ukrainian military to ensure that Ukraine cannot be used as a launchpad by NATO to threaten security of Russia, has been partially achieved by extensive air and missile strikes to neutralise air defence capability and air assets to achieve favourable air situation, pulverising military targets, claiming to have destroyed most of them, including air fields and military installations in Ukraine. It is increasingly capturing strategic installations to step up pressure on Zelensky.

The offensive from South is aimed at cutting off Ukrainian access to Black Sea and Sea of Azov by securing a permanent land corridor from Russia to Crimea with an end-state of landlocked Ukraine.

Russians have been able to achieve most of the corridor except Odessa, with intense fighting in townships. The offensive from the East is aimed at liberation of complete Luhansk and Donetsk regions, where intense fighting continues despite initial gains.

Ukraine’s strong resolve to resist Russian offensive under leadership of President Zelensky, has been noteworthy, having deliberately prepared for the conflict. To overcome the asymmetry in military asset holdings, the Ukrainian force deployed smartly in densely populated areas to fight pitched battles in townships, despite losing air cover in the early phases of the conflict.

The strategy is to deploy military assets in civilian areas, turn towns into fortresses, and residential areas into pillboxes, incite mercenaries and civilians to fight as part of the war machine, launch sniper attacks, ambushes, small team operations, drone attacks on softer convoys, and provoke Russians to target residential areas in order to gain propaganda advantage from civilian casualties through superior information warfare, backed by the west to demonise President Putin.

With adoption of urban insurgency model, the war has thus morphed from conventional to hybrid war with both sides planning to induct more non-state actors.

The Ukrainian strategy seems to have succeeded in delaying Russian operations and placing Russia in an awkward position of having to choose between fighting in populated, built up areas, which is cost prohibitive in terms of human and equipment casualties in favour of defender, or isolating, bombarding townships, residential areas alleged to house military assets, disrupting essential services, and pressuring Zelensky, at the cost of risking international condemnation.

The Russians appear to have selected the latter option, extending the range of air strikes to western Ukraine which is the lifeline for assistance from West including military hardware.

Are actions by West helping Ukraine?

US and Western allies are claiming to be helping Ukraine through financial and diplomatic sanctions on Russia and military hardware support to Ukraine of the type (smaller calibre) which can improve staying power of Ukrainian fighters, and induce long term insurgency in Europe, even if negotiations reach some conclusion in due course.

The aim is to permanently weaken Russia by weaponising Ukrainian nationalism, posing Zelensky as hero, to continue fighting with their proxy support.

EU’s support to refugees from Ukraine is the only positive humanitarian support, where UK and US seem to be shying.

If the war gets prolonged further, Ukraine will be destroyed physically, Russia will suffer punitive financial cost, EU will lose long lasting peace and energy security, and the entire world will suffer economically.

Ukrainians and Russian residents and soldiers will bear the brunt of the consequences. While the EU is presenting a bold, united front with the US in order to weaken Russia, it has its limits, up to the point when its gas supply is choked, with risk of insurgency at its doorsteps.

In the short term, the US may appear to benefit from Russia's weakness by increasing arms and oil exports, but in the long run, it will lose credibility and reliability globally.

China will emerge wiser, learning from Russian experience and assessing the risk profile of the US, whose leadership is fixated on the wrong adversary and unable to combat the real competitor in the Indo-Pacific. Diversion of focus from China to Russia will speed up US decline as superpower, faster than what its strategists anticipate.

Sanctions will eventually lose their lustre, as more sanctions may lead non-western countries to seek an alternative financial system that is not dependent on the West, jeopardising their long-term interests. The world is more intertwined than it was previously, and with the economic fulcrum shifting from the West to the Indo-Pacific, a de-dollarised financial system could be the most significant future risk to the US.

For European security, a neutral Ukraine is the best option. Ukraine has never been accepted into NATO and is unlikely to be welcomed in the future, as it has never met the basic criteria of a peaceful internal and exterior situation, having been involved in conflicts/disturbances in both dimensions.

It is preferable if Ukraine and Russia face reality as soon as possible and resolve the issue through direct dialogue, putting rhetoric, egos, and sentiments aside. It might be a better idea for the West, too, to encourage a ceasefire through discussions, addressing the legitimate security interests of all parties, rather than adding fuel to the fire by imposing more sanctions or providing more hardware support to prolong the war.