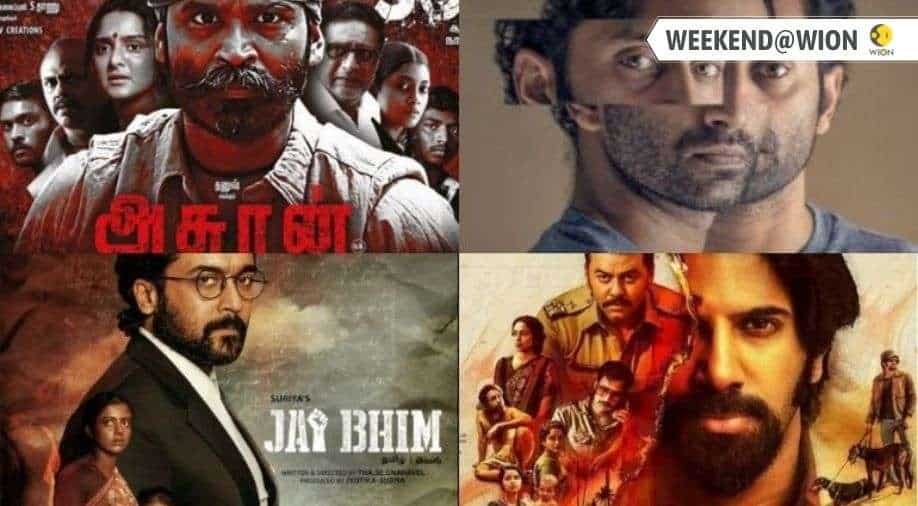 The success of such reality-based and content-driven South Indian films raise the question: Where does Hindi cinema fit into the picture?

Actor Dhanush has earned the coveted Best Actor award at the renowned BRICS Film Festival for his portrayal in 'Asuran.'

Dhanush is an Indian actor, producer, director, writer, lyricist, dancer, and playback singer who works mostly in the Tamil film industry and occasionally in Hindi cinema.

'Asuran' is a script-driven, low-budget (in terms of set and technical components) film that sends a social message and has a socially relevant topic.

Another such film, 'Jai Bhim' was so good that it got better ratings than some of biggest Hollywood movies on Internet Movie Database (IMDb) portal.

The success of such reality-based and content-driven South Indian films raise the question: Where does Hindi cinema fit into the picture?

Hindi cinema is frequently referred to as Indian cinema by the Indian and international media and film historians.

However, regional cinema, particularly the South Indian film industry, has its own set of languages, customs, and rich cinematic history.

South Indian films, both in terms of quantity and quality, can compete with any in the world.

The Tamil, Telugu, Malayalam, and Kannada language industries have been producing remarkably wonderful films that are far superior to Hindi films.

Many blockbusters have been released in the northern territories, ranging from "Ek Duje Ke Liye" to "Baahubali."

Earlier, South Indian films have been criticised for their superstar worship and larger-than-life representations of their heroes.

Extremely humorous and physics-defying action sequences have provided plenty of fodder for memes on social media.

But things have changed for the better now. Over the years, particularly with the dubbing of films in northern Indian languages on TV channels, and later through online streaming with subtitles, the Indian movie industry is evolving-and becoming truly universal-at a breakneck pace.

The quality of the content is always increasing and meets, if not exceeds, global standards. One might assume that the juggernaut that is the Hindi film business is causing this development. That, however, is no longer the case.

While we've recently seen a number of Hindi films that have been praised for their excellent performances, storylines, and technical perfection, it's the South Indian regional films that are currently at the forefront of this shift.

Somewhere along the line, Hindi cinema in general has gotten stuck in a rut.

The biggest production houses seem to be playing it safe and sticking to the same old formula of song, dance, and romance, in the same way that they neglect to push the envelope when it comes to creativity and novelty.

This mantle has clearly been taken over by storytellers and film-makers in Chennai, Hyderabad, and Kochi.

Not only are films coming out of these regional industries making waves in their particular regions, but also overseas and even inspiring the Hindi film industry to remake them. More often than not, it is the Hindi industry that is now remaking southern movies, rather than the other way around. Some of the biggest hits over the years, from 'Bhool Bhulaiyaa' to 'Drishyam' , were remakes of southern films.

The multiplicity of genres that the Southern film industry is experimenting with is truly remarkable. From the epic storytelling of 'Baahubali,' the superhit sci-fi 'Robot/Enthiran' to the experimental anthology 'Super Deluxe' and the various thriller experiments that we have witnessed in Malayalam, the message is quite clear.

'Rocketry: The Nambi Effect,' a forthcoming biographical drama film, is another excellent example of how Southern movies no longer depend on formulaic approaches to film-making and are poised to challenge international standards on a regular basis.

The same cannot be said of Hindi cinema anymore. Audiences are struggling to tell the latest Salman Khan or Akshay Kumar movies apart from their previous ones, because they have become formulaic and predictable. One can also argue that the proliferation of remix songs is a testimony to the lack of originality plaguing Hindi cinema in the music department.

In many cases, South Indian actors are prepared to leave their high-profile, A-list reputations and play downtrodden or raw characters. Look at any character played by Vijay Sethupathi  (he is adept at playing hero and villain, and in 'Super Deluxe', essayed the role of a transgender) in Tamil or Dulquar Salman in Malayalam (in 'Kurup', he donned the role of one of the most evasive fugitives in India), and you will know what I mean.

The upcoming years of Indian Cinema will be game-changing, with the rapid rise of OTT platforms (which allow for easy global reach) and the creation of South Indian films in various languages, including Hindi.