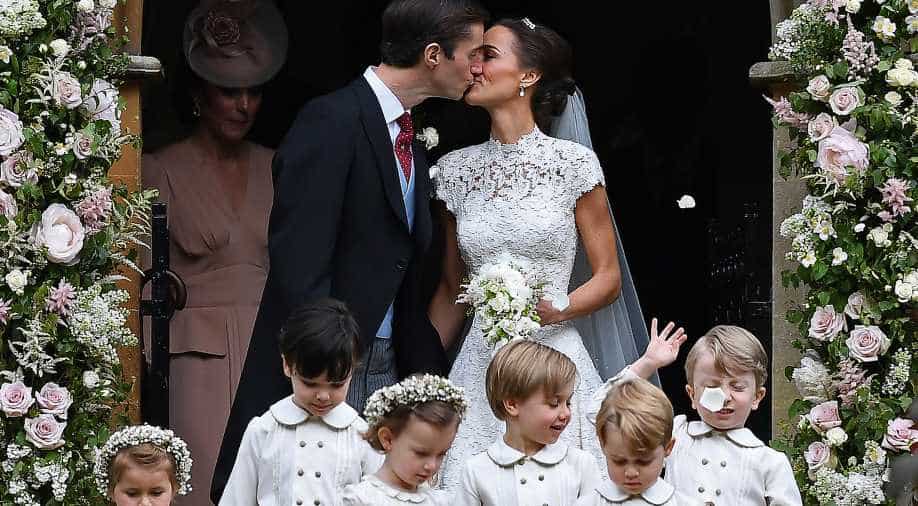 After turning heads at her sister Kate's wedding to Prince William, Pippa Middleton graduated from bridesmaid to bride on Saturday at a star-studded wedding in an English country church.

The 33-year-old married financier James Matthews, 41, at a ceremony attended by the royal couple and tennis star Roger Federer, as she wore a couture dress by British designer Giles Deacon.

Middleton made headlines around the world in a figure-hugging bridesmaid's dress at William and Kate's wedding in 2011.

William, the second in line to the throne, arrived with his brother Prince Harry at St Mark's Church in Englefield, a quiet rural village west of London near the Middleton family home.

The bride arrived with her father Michael in a Jaguar Mark V open-top car, wearing a high-necked, capped-sleeved dress with a corseted bodice and sweeping skirt, worn with a veil by milliner Stephen Jones.

She received a cheer from around 100 local residents and well-wishers from the village who were invited to watch the event from the green in front of the church.

The presence of so many senior royals means security around the village was tight, and no-fly zones banning aircraft including drones were imposed around the area.

Local residents were reportedly given wristbands and asked to carry identification.

There was no sign at the church of Harry's girlfriend Meghan Markle, a US actress, although she was reportedly due to attend the evening event.

Harry's love life is a source of much speculation, prompting him last year to issue a rare warning to the media not to harass Markle.

Middleton was plunged into the public eye at her sister's wedding, which had an estimated worldwide television audience of two billion.

Pictures of her standing behind the royal bride in a white Alexander McQueen maid of honour's dress filled newspapers for weeks afterwards.

"It is a bit startling to achieve global recognition (if that's the right word) before the age of 30 on account of your sister, your brother-in-law and your bottom," she once wrote.

Since then, she has been a regular fixture on the London social circuit, and is a regular in the royal box at the Wimbledon tennis championships.

She became engaged to Matthews, a former professional racing driver and heir to the Scottish title of Laird of Glen Affric, in July last year.

After the church service, guests were invited to a reception at a nearby stately home, Englefield House, where a flypast by a World War II-era Spitfire plane was reportedly planned.

Pippa Middleton is the second of three children, a year younger than Kate and four years older than businessman James.

She graduated from Edinburgh University with an English literature degree, before working part-time for her parents' party paraphernalia business.

She has published two books -- a 2012 guide to party planning that was widely mocked for offering glaringly obvious advice, and a healthy recipes charity book. She also had a column for a supermarket magazine.