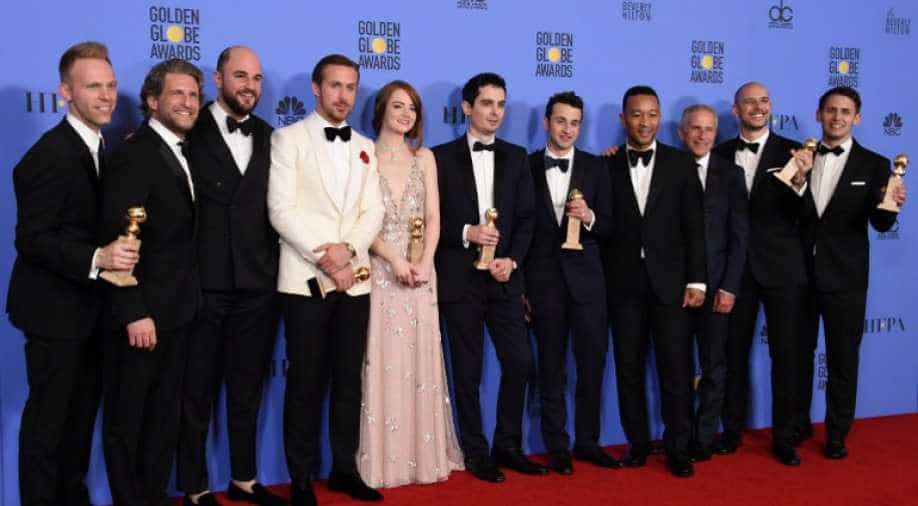 The cast and crew of 'La La Land', including Ryan Gosling, Emma Stone, director Damien Chazelle and John Legend pose for a picture after their win. Photograph:( AFP )

The film won every award it was nominated for with its stars Emma Stone and Ryan Gosling winning in the acting categories. The Golden Globe Awards are the first major Hollywood film award event of 2017.

Casey Affleck and Isabelle Huppert won other acting prizes for their roles in "Manchester By The Sea" and "Elle."

Huppert came as a surprise winner by beating contenders including Natalie Portman, who had been considered the favourite for playing Jackie Kennedy in "Jackie."

Accepting the award, Davis said, "It's not every day that Hollywood thinks of translating a play to screen — it doesn't scream 'moneymaker'. But it does scream art, and it does scream heart."

In a surprise win, British actor Aaron Taylor-Johnson was named best supporting actor for his role in "Nocturnal Animals" — a prize that was expected to go to Mahershala Ali for "Moonlight."

Jimmy Fallon hosted the ceremony and joked that the Golden Globes was "one of the few places left where America still honours the popular vote" — a reference to Donald Trump beating Hillary Clinton in the recent US election despite getting fewer votes overall.

He also described emotional drama "Manchester By The Sea" as "the only thing more depressing than 2016."

Meryl Streep launched an attack on Trump while accepting the Cecil B Demille award for outstanding contribution to entertainment.

Streep referred to Trump's mocking of a disabled reporter and said, "Disrespect invites disrespect, violence incites violence. And when the powerful use their position to bully others we all lose."

There were several British wins in the television categories, including awards for Tom Hiddleston, Hugh Laurie and Olivia Colman for "The Night Manager."

Claire Foy also won the best actress in a television series for her portrayal of Queen Elizabeth II in Netflix's "The Crown."

For the first time, the arrival of Hollywood's A-listers on the red carpet was live-streamed on Twitter.

The Golden Globe Awards, which are run by the Hollywood Foreign Press Association, honour the best in TV and film from the past year.