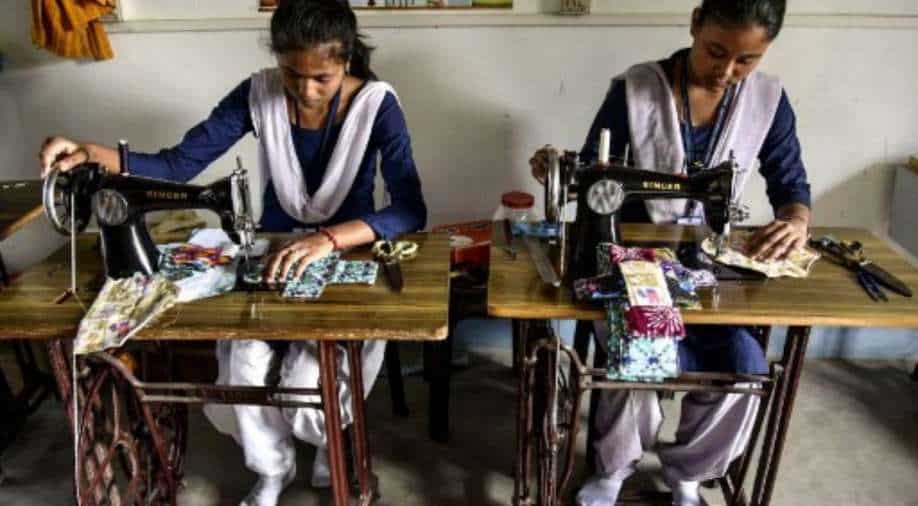 As per the report, 41.8 per cent of women in the age group of 15–24 use disposable sanitary napkins while 16.4 per cent use locally produced napkins. (representative image) Photograph:( AFP )

The report "Sanitary Waste Management in India: Challenges and Agenda" released by India's environmental think tank Centre for Science and Environment estimates that India’s consolidated daily generation of sanitary napkins and baby diaper waste, is approximately 925 tonnes, which accounts for 0.65 per cent of total solid waste.

If adult diapers, tampons, condoms, incontinence sheets, and similar waste, are added to the 0.65 per cent mentioned above, it may go up to 4 percent of the total solid waste generated in India, which is 141,000 tonnes per day.

However, there is no adequate mechanism to dispose of this waste, the report said.

Due to unorganised sanitary waste management in cities and villages, poor source segregation, and inadequate collection, transportation, and disposal networks, most sanitary waste ends up in landfills mixed with solid waste or dumped openly, posing significant health and environmental hazards.

According to the Solid Waste Management Rules (SWM), sanitary napkins and diapers are included in the definition of dry waste in the SWM Rules, 2016.

As per SWM rules, every waste generator must collect and segregate all waste into three categories: biodegradable, non-biodegradable, and domestic hazardous waste.

In the case of sanitary waste, the waste generator must wrap the used product in the manufacturer’s pouches or any other suitable wrapping material as directed by the local authorities and collect it with other non-biodegradable waste.

The guidelines of India's top pollution watchdog, the Central Pollution Control Board (CPCB), urge users to dispose of sanitary waste in the wrapper provided by the manufacturer or use newspaper to wrap it.

Watch | Spain to allow menstrual leaves: Which other countries are doing so?

Under the Swachh Bharat Mission guidelines, sanitary napkins and diapers must be separated, specially marked, and sent to a biomedical waste facility for incineration.

Speaking to WION, Shailshree Tewari, Programming Officer, CSE and the author of the report, said sanitary napkins are not being considered as bio-medical waste in India, which is leading to a lot of problems in their disposal.

She said that there are also inadequate incinerators in India to dispose of sanitary napkins.

A sanitary napkin incinerator disposes of napkins in an environmentally friendly method by burning the pads and converting them into ash.

Tewari said that besides the inadequate number of incinerators in India, the ones available are inconsistent and many do not even meet the emission standards prescribed by the CPCB.

What is even more concerning is that there is no provision for a penalty for not complying with the guidelines, she added.

"While CPCB’s guidelines are legally enforceable, a lack of standards for small-scale incinerators attracts no penalty." Tenders for the purpose of procurement of decentralised incinerators that are publicly available also reflect the same concern, "Tewari said."

She said there is a dearth of awareness and organized sanitary waste disposal infrastructure and disposal practices in rural and urban locations vary greatly.

Many women do not use dustbins because they think it might bring them disgrace as waste collectors might think poorly of them if they notice soiled napkins, the report said.

As per the report, 41.8 per cent of women in the age group of 15–24 use disposable sanitary napkins while 16.4 per cent use locally produced napkins.

Assuming a one-month-old infant uses 10 diapers a day—or 300 diapers per month—a single one-month-old baby could generate around 3,600 used diapers every year, it said.

According to the United Nation Children’s Fund (UNICEF), 25 million children are born in India each year, and the average weight of a soiled diaper is 800 grams. Hence, India generates approximately 548 tonnes of baby diaper waste per day, or 2 lakh tonnes annually.

However, in the last four years, more women have started using sanitary napkins in the states of Bihar, Assam, West Bengal, Maharashtra, and Andhra Pradesh, the report found.