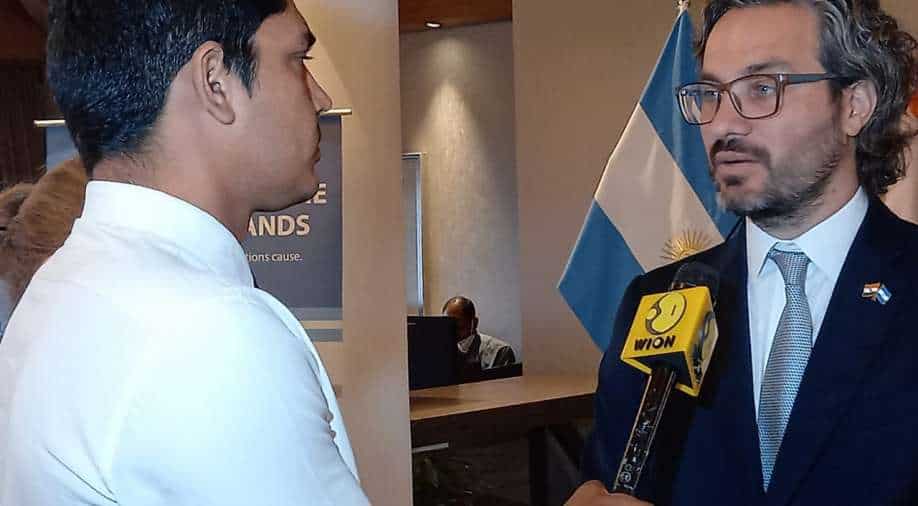 Foreign minister Santiago Cafiero handed over an invite from his government to PM Modi to visit Argentina. PM Modi had visited Argentina in the past for the G20 summit.

In Delhi, visiting foreign minister of Argentina Santiago Cafiero has raised the issue of Malvinas or Falkland Island issue and held the first meeting of a commission formed by his government. The islands in South Pacific, are referred to as Falkland by UK and Malvinas by Argentina. Both countries went to war over them in 1982. Speaking to our Principal Diplomatic Correspondent Sidhant Sibal, FM Cafiero called for a "dialogue" with UK and pointed that "UNGA designed a mechanism to solve this dispute".

Interestingly, the commissions meeting took place in the same room where UK PM Boris Johanson held his press conference in Delhi just two days ago. The commission, according to Argentina government seeks to promote compliance with UN resolutions and calls for the resumption of talks between the UK and Argentine over Malvina's sovereignty.  MP Shashi Tharoor, Granddaughter of the father of the nation Mahatma Gandhi--Tara Gandhi Bhattacharjee were among the dignitaries from the Indian side who were present.

Asked about his conversation with EAM Jaishankar, the minister said focus was on "investment, enhancing trade, and the good news is in 2021 trade grew exponentially". He also handed over an invite from his government to PM Modi to visit Argentina. PM Modi had visited Argentina in the past for the G20 summit. The visiting FM will also visit Mumbai for nuclear plant collaboration between the two countries for peaceful purposes.

WION: What has been the key focus of your India visit, especially your conversation with EAM Jaishankar?

Santiago Cafiero: Now we are here starting up for the commission of dialogue on Malvinas islands, our claim is really the core part of our foreign policy and well, we had a bilateral meeting with EAM Jaishanker. We talked about investment and enhancing trade. The good news is in 2021 trade grew exponentially that is good news no doubt.

WION: Talking about the Malvinas, what is the key reason for holding this meeting of the commission in New Delhi?

Santiago Cafiero: We are going back to the dialogue table as stated by the international community since 1965. The UNGA designed a mechanism to solve this dispute, it is the two countries that usually promote international law, respect multilateralism, promote the principles of the UN charter, they have to sit down and have a dialogue.

WION: How do you see India's stance when it comes to Malvinas islands at a time we know India has a good relationship with the UK. The UK PM was in Delhi just two days ago...

Santiago Cafiero: Indeed the role of India is historical in supporting Argentina's claim, India is part of the UN decolonization commission and it is also part of other fora that are addressing these problems.

It is not a matter of good or bad relationship with a government or a country, its the international community and among them India that wishes that we find a diplomatic solution and we all know we need to solve this controversy because the UK carried out this usurpation of our land 189 years ago and colonialism is something that is really anachronic, so we need to find a peaceful solution based on dialogue.

WION: On the talks with the Indian side, the focus was on atomic energy, defence and in the past has been on space. What are the deliverables you are looking at?

Santiago Cafiero: A lot of progress has been made in the field of trade between India and Argentina and we talked about the transfer of technology and knowledge.

We are getting to know each other better as we go along, somehow we met through satellite, science and technology development in fields in which we can supplement one another and then there is the possibility of joint ventures and hi-tech business.

Argentina and India have talent, this is very promising indeed and part of the innovation agenda - and we have talked with minister Jaishankar who has agreed on it. This week on Wednesday, I will be visiting the nuclear plant in Mumbai meant for peaceful purposes and lot of technical work is being done there which is very important. What is very important is that it will be used for medical purposes.

WION: The Russian invasion of Ukraine, what is your government's position on it...

Santiago Cafiero: Argentina condemns Russia's invasion of Ukraine and we are part of a committee on the violation of human rights in Ukraine to look into it.

Argentina defends multilateralism and on multilateral organizations which do not have jurisdiction over peace and international security, I mean there are certain fora that see to these matters, so we do not favour exclusion of Russia in fora that deal with peace and international security because we believe firmly on multilateralism, this conflict must be solved once and for all. There must be peace and dialogue, we need to find a definite solution to the issue in Ukraine.

WION: The war has led to an increase in the prices of commodities, have you reached out to India for any import of wheat or sugar?

Santiago Cafiero: As for food, we are producers of food, that can ensure a stable provision of food security which is an important part of the international agenda.

I just came from Italy where we held bilateral meetings with FAO, WFP and we moving in that direction, I mean, we can be food and energy provider. We have a lot of gas and oil and also Lithium and copper. So through mineral exploration, we can support the energy transition that is needed.

WION: When will Lionel Messi come to India?

Santiago Cafiero: I don’t know. I don’t know if he’ll come. Messi is an extraordinary football player and a great person. Very sensitive to promoting football worldwide because he knows that football is a tool that brings people together and unites people. All Argentineans feel proud of him, he is a deluxe ambassador of that peaceful feeling in Argentina. Hopefully, he’ll come. I don’t have his agenda but hopefully, he’ll come someday