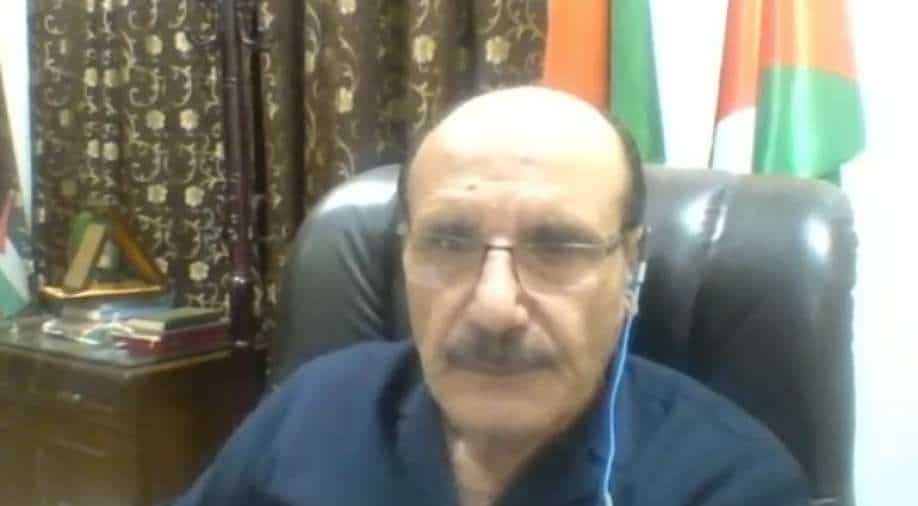 Palestine's envoy to India Adnan Mohammad Jaber Abualhayjaa has said that his government has been 'working for the ceasefire from the first day' when it comes to the ongoing situation with Israel.

According to him, over 200 people have lost lives in West Bank and Gaza due to actions of Israel.

Speaking to WION Diplomatic Correspondent Sidhant Sibal exclusively, Amb Adnan Abualhayjaa hoped that India won't make reference to Temple Mount, as it is 'encouraging Israelis in the manner which may lead to religious war'.

He also condoled the death of Indian national Soumya Santhosh.

Santhosh, a caregiver, died in Israel's Ashkelon in a rocket strike and is survived by nine-year-old son and husband.

This is his first-ever interview amid the ongoing escalating violence between Israel and Palestine. The fighting began after violence erupted in Jerusalem and possible eviction of Palestinians in the Sheikh Jarrah and Silwan neighbourhood.

WION: What is the current situation when it comes to the ongoing conflict? Will you call it a full-scale war?

Adnan Mohammad Jaber: The current situation in Palestine is mainly for two reasons. First is the occupation, as long as the occupation continues. Who is ignoring the Oslo Agreement, who is ignoring all the agreements with Palestinian authorities, who is killing, jailing every day in the West Bank, restricting the movement of Palestinian people via the 600 military checkpoints, is controlling 60% of the west bank, restricting the people's movement, controlling tax money of Palestinians, refusing elections in Jerusalem?

Secondly, there was the fourth election in Israel and Netanyahu has failed to form a government. Netanyahu knows how to make problems, so he started telling the right-wing of the Israelis to go to Al Aqsa to restrict the worshippers from praying.

Before it became a military issue, it was the issue of Al Aqsa and Sheikh Jarrah area where they want to displace 28 families living in their houses for 70 years. He wants to put obstacles in forming the government, so he has started with these problems because if other parties are able to form the government, Netanyahu, because of corruption, might go to jail.

Surely, it's a war, and a very bad war because the victims of this war are civilians mainly. We are on the eighgth day of the war and we have lost 218 people in the West Bank and Gaza, more than 5,600 people have been injured. In the West Bank, there are no weapons with Palestinian people, no rockets, nothing. 250 of the wounded got injured due to the metal bombs. Israelis are committing war crimes on both sides, in Gaza and in the West Bank. Hope it will end soon.

WION: How do you think the international community can support Palestine?

Adnan Mohammad Jaber: Israel is an exact copy of South Africa during the apartheid time. We live in an apartheid regime in Palestine.

The international community could help a lot, first of all, they should boycott Israel, exactly as South Africa had been boycotted. Secondly, Americans should stop pressurising other countries to not take action against Israel. Many of the European countries want to take action but don’t act due to American pressure. Hope there will be real pressure from the international community to follow the United Nations resolution. Israel is the only country in the world which is over the international community. Not just UN resolutions, they refuse everything. Hundreds of resolutions, from the security council to the general assembly of the UN. It is the only country that can refuse everything.

WION: Will Palestinian authorities call for a ceasefire?

Adnan Mohammad Jaber: We were in the beginning and had talks with some Arab countries like Egypt. Because Egypt normally coordinates in these matters. With Qatar... we spoke with France, Britain. Our foreign minister was in Europe, he was working hard with the European Union for the ceasefire. From the first day, we started to work on the ceasefire. We called on the security council, to have a resolution for the ceasefire. But three times, Americans refused, including on Sunday.

WION: Then there is the issue of Hamas's rocket attacks, something that has been condemned globally...

Adnan Mohammad Jaber: First of all, let me present my condolences for that lady who passed away in Israel. We feel sorry that we have lost one Indian in this conflict. So, my condolences to the Indian people and her family.

Secondly, the rockets of Hamas are a reaction, not an action. The main thing is the occupation. I am ok with destroying all weapons and Israel and Palestine not using weapons. When we signed the Oslo agreement, we signed it to live side by side in peace, security, coordinate in everything together as neighbours. Since that time, 1993, up to now, Israel is refusing everything, destroying everything. I think we will go to the question of two state solutions and they are destroying two state solutions. Rockets is a reaction, and hope, we won't see any aggression on the Palestinian people in Gaza and West Bank.

WION: Can President Mahmoud Abbas prevail over Hamas, and is Hamas trying to exploit political space?

Adnan Mohammad Jaber: President Mahmoud Abbas is in connection with the leaders of Hamas and was working for the ceasefire from the first day. Any war inflicts damages on both sides. You need to control the Israelis and their crimes, otherwise, we will see another war. Without the end of this occupation, difficult for neighbours to live side by side, according to the international resolutions. Agreements have been signed with the Israelis, but there is no security in the area at all.

WION: Is Hamas trying to use the political vacuum in Gaza, West Bank vis a vis the election schedule?

Adnan Mohammad Jaber: We are a democratic state, and have democratic institutions. If Hamas via elections, takes advantage and wins the election, we have no problem. Let Hamas control the country. They are the main party of the Palestinian people, they have a political department as the organisation. If they win the elections, we will welcome that and we will give them the authority. we have no problem, this is a democracy.

WION: How do you see India's statement at the UNSC? New Delhi reiterated its 'strong support to the just Palestinian cause and its unwavering commitment to the two-state solution".

Adnan Mohammad Jaber: India is a very close friend of Palestine and I would like to thank Indian government for strongly supporting the cause of the Palestinian people.

Only one thing, there is something which I have seen in the statement, which is Al Masjid Al Aqsa/Temple Mount, which is a new expression. Al-Masjid Al Aqsa since the British was nominated to rule by Palestine. In 1929, a mission had come from the United Nations after some conflict between the Palestinian Muslims and Jews at that time. They checked everything in Al Aqsa and said Al Aqsa is a Muslim place and Jewish people pray near the wall. It was like that without any problem. Secondly, Al Aqsa mosque is registered in UNESCO as a Muslim place.

So, hope this is not used again as encouraging Israelis in that matter will lead to religious war, which is not acceptable to anyone. India is supporting Palestine and we thank them very much, not only on the political level, but they also helped in many other things, such as building hospitals, schools, diplomatic institutions, women empowerment centers, so they help Palestine in many ways.

WION: What is current situation of the Covid crisis when it comes to the Palestinian territories.

Adnan Mohammad Jaber: Now, a little bit better. Last month, before it was very bad, still a little bit better but we don't have enough vaccines to say the truth. It's not bad, these days at least. It is much better than two months ago.