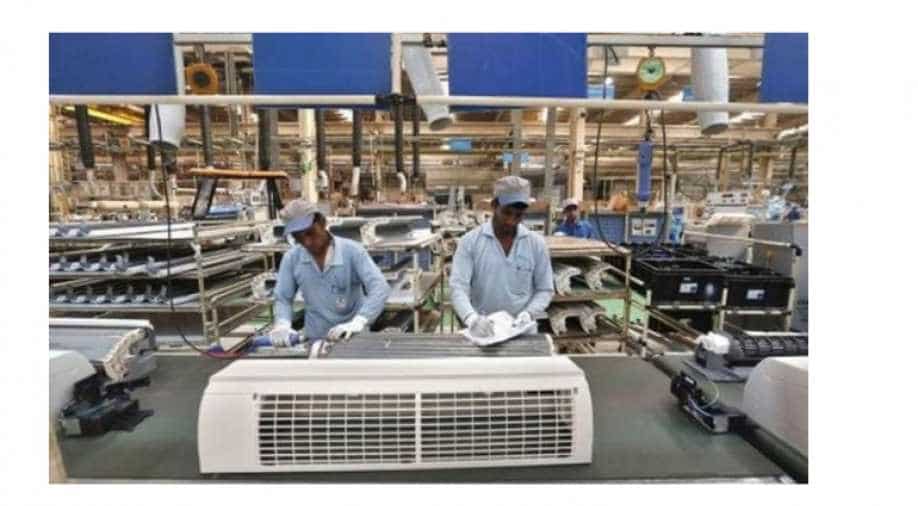 Workers on a production line in an air-conditioning plant.  Photograph:( Reuters )

With India's AC market expected to explode from 30 million to a billion units by 2050, India, the world's second-most populous country, could become the planet's top user of electricity for cooling.

With India's AC market expected to explode from 30 million to a billion units by 2050, the world's second-most populous country could become the planet's top user of electricity for cooling.

India is already the number-three spewer of greenhouse gases, burning through 800 million tonnes of coal every year and the predicted AC boom could mean the country would have to triple its electricity production to meet demand, experts say.

But for the hundreds of millions of Indians enduring scorching, even deadly, summers, the air conditioners are a godsend.

"Summers make our life miserable," said Kumar, a 48-year-old laundryman earning $225 a month who this year installed an AC unit in his two-room house in the town of Behror in the baking-hot desert state of Rajasthan.

"Sleeping for few hours is a struggle after a day's hard work," the father-of-two told AFP, running a hot iron over crumpled clothes. "I am not rich but we all aspire to a comfortable life."

Vast swathes of India endure a gruelling four-month long summer, and the mercury has been inching ever higher in recent years.

In 2016, the Earth's hottest on record, temperatures in the Indian town of Phalodi soared to 51 degrees Celsius (122 Fahrenheit), the highest recorded in India.

The brutal heat can melt tarmac on the roads and puts millions of people at risk, with nearly 2,500 victims perishing from sunstroke in 2015.

'Everyone deserves an AC'
Currently, just five per cent of Indian households are equipped with ACs compared to 90 per cent in the United States and 60 per cent in China, up from virtually zero 30 years ago.

"It's no longer a luxury product but a necessity," said Kanwal Jeet Jawa, India head of Japanese manufacturer Daikin, whose factory in Rajasthan churns out 1.2 million AC units per year.

"ACs increase productivity and life expectancy. Everyone deserves an AC," he told AFP.

The irony is that as humans try to stay cool, the refrigerants inside AC units and the generation of electricity needed to power the appliances are exacerbating global warming.

In addition, studies including by the World Health Organisation and UN-Habitat show that the heat-generating motors inside AC units can themselves push up temperatures in urban areas, where the appliances are widely used, by a degree or more.

As demand grows, the amount of energy consumed globally by AC units could triple by 2050, requiring new electricity capacity equivalent to the combined current capacity of the US, the EU and Japan, the International Energy Agency says.

India currently generates about two-thirds of its electricity with coal and gas, and despite ambitious plans for renewable energy the country is set to remain highly dependent on hydrocarbons for decades to come.

One possible source of hope is if Indians buy more energy-efficient AC units, and manufacturers like Daikin are promoting these over older technologies.

But they are pricier, and Indian consumers that have AC are slow to upgrade, partly due to an ingrained culture of repairing devices rather than buying new ones.

In June the Indian government issued an "advisory" to AC makers to keep the default setting at 24 degrees Celsius to save billions of units of electricity and reduce emissions.

But for now the measure is not mandatory, and with many people expressing outrage, it is unclear how effective it will be.

"People want ACs to keep their homes cool," Yadav, who says his sales have rocket 150 per cent every year, told AFP. "This year I sold 300 ACs."

Yadav said rural families, in particular, attracted by aggressive marketing by manufacturers, are ditching traditional ways to cool their homes.

These include ceiling fans or air coolers -- a fan-run device that blows cool air off water-soaked pads, which are often a haven for disease-carrying mosquitoes.

Laundryman Kumar too feels the summers have become hotter than usual in recent years, pushing him to invest in AC.

"Scientists keep on saying such things but I can at least have some sound sleep now."