We should look at climate change as a half-empty glass and take action, UNEP's Divya Datt tells WION 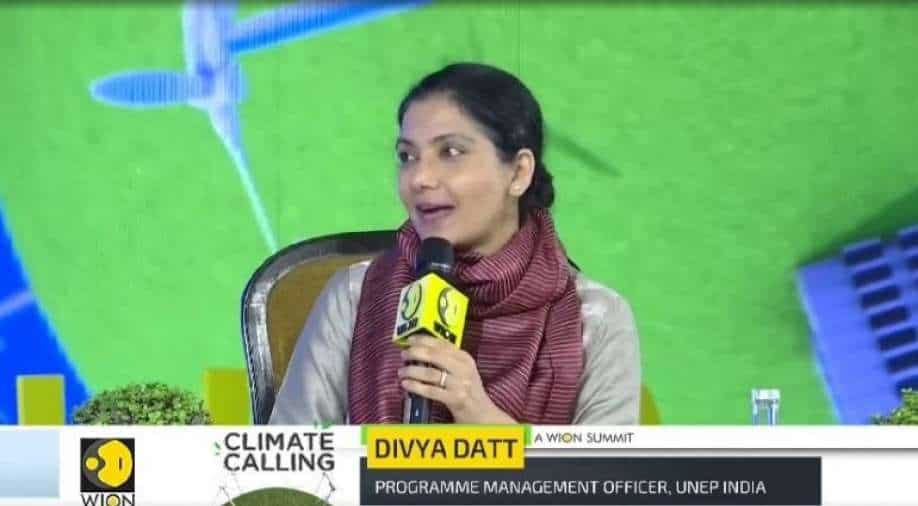 During WION's climate summit, Divya Datt, programme management officer, UNEP, India has said that we should look at climate change as a half-empty glass and take action.

''If you look at the assessments that are being done today, and the science that is being generated, there is a target to limit global warming to 1.5 degrees Celsius, compared to pre-industrial levels,'' she told WION's executive editor Palki Sharma Upadhyay during the first session of the summit.

''But even with unconditional commitments and all the pledges that the countries have taken we are looking at a rise in temperature of 2.7 degrees Celsius,'' she added.

"Even with all the unconditional commitments and pledges by the countries, we are looking at an increase of 2.7 degrees Celsius by the end of the century," says @divya_datt18, Programme Management Officer, UNEP#WIONClimateSummit pic.twitter.com/8e9h50is3S

''In many parts of the world we are seeing calamities at an unprecedented scale as a result of climate change,'' Datt said.

For a lot of environmental crises, the solutions are there. But we need commitments, not just from the government, but from businesses and civil societies as well: @divya_datt18, Programme Management Officer, UNEP#WIONClimateSummit pic.twitter.com/NcDWCbW58F

''To reach that 1.5 degrees Celsius and reduce greenhouse emissions we need to fulfill net-zero commitments.''

The corporate world remains far from being aligned with global climate goals, and in some countries has gone backward since a landmark agreement to cap global warming was signed in 2015.

Within UN climate negotiations, "loss and damage" refers to the costs countries are incurring from climate-related impacts and disasters - costs that disproportionately hit the world's poor and vulnerable who did least to cause global warming.

Drawing on more than 34,000 references from the latest scientific papers, the report released on Monday by the UN Intergovernmental Panel on Climate Change (IPCC) confirmed that economic sectors from agriculture and fishing to tourism were already being damaged.

And as the bills mount up, poorer countries are left with even less to spend on heath, education and infrastructure – compounding suffering.

The report is likely to intensify a years-long political fight over funding to pay for climate-linked losses, ahead of the next UN climate summit, COP27, in Eygpt in November.

Vulnerable countries for years have sought funding to help them shoulder these costs. So far, it hasn't arrived, and rich nations have resisted steps that could legally assign liability or lead to compensation.

The mention of "loss and damage" in the 2015 Paris Agreement came with the caveat that it "does not involve or provide a basis for any liability or compensation".

Last November at the COP26 climate summit in Glasgow, poor countries called for a special "loss and damage" fund to be established, but the United States and other rich nations resisted. The delegates agreed to set up a U.N. body to help countries address loss and damage, and to continue discussions towards making "arrangements" for funding.

Last month, the UN's Intergovernmental Panel on Climate Change warned that nine percent of all the world's species will likely be "at high risk" of extinction even if warming is capped at the ambitious Paris target of 1.5 degrees Celsius.

In 2019, a report by UN biodiversity experts said one million species could disappear in the coming decades, raising fears the world is entering a sixth era of mass extinction in the last half-billion years.