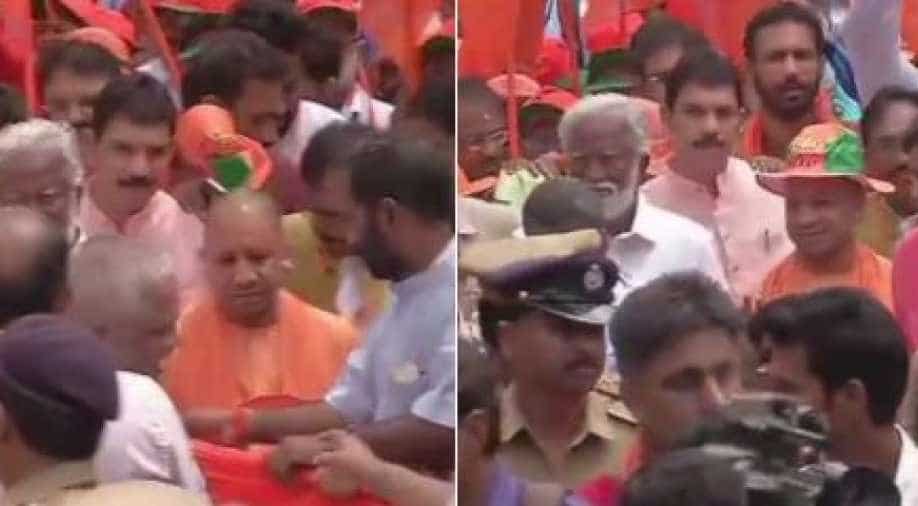 The BJP chief met the family members of RSS-BJP workers killed in the political violence in the state.

Amit Shah's Jan Raksha Yatra, held under the theme of 'All have to live! Against Jihadi-Red Terror', from Payyannur will travel through the state before ending in Thiruvananthapuram on October 17.

UP CM Yogi Adityanath while joining the rally in Kannur said: "There is no place for violence in a democracy, but political killings are continuing here."

"This yatra is a mirror for communist governments in Kerala and Tripura. They should put an end to political killings," the UP chief minister added.

The BJP chief had met the family members of RSS-BJP workers killed in the political violence in the state and also inaugurated an exhibition organised in their memory.

Speaking to reporters during the rally, the BJP chief said the point for the rally is to focus "political violence" in the state.

"At least thirteen BJP workers were killed in the state, they burnt the offices and dismembered the bodies of the BJP workers," Amit Shah asserted.

"Most of the deaths occurred in Kannur district, this is the reason to start the yatra from here," he said.

Amit Shah added that he will take more yatras in other state capitals including in Delhi.