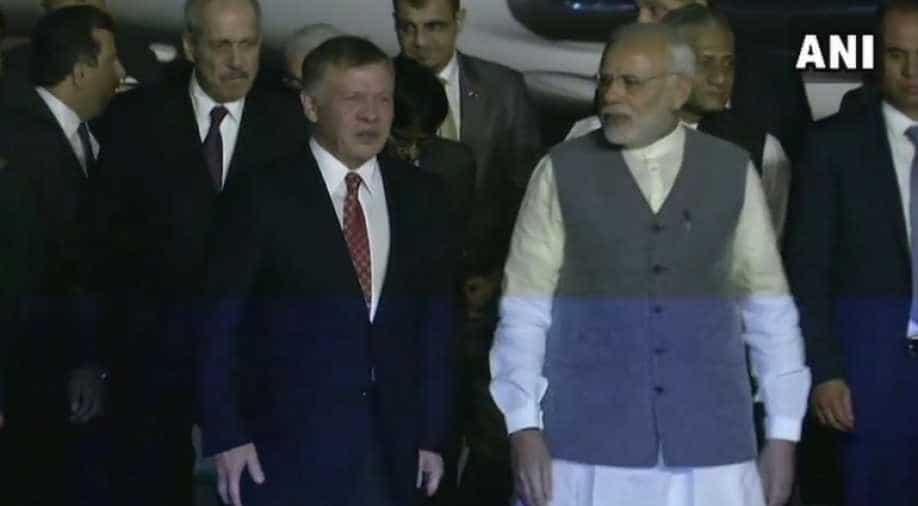 King of Jordan Abdullah II bin Al-Hussein arrived in India on Tuesday evening for a three-day visit and was received at the airport by PM Modi. This is his second visit to India after his visit along with Queen Rania in 2006.

The King will be accompanied by a business delegation during the visit, scheduled from February 27 to March 1.

According to Ministry of External Affairs (MEA), during this visit, "the two sides will discuss the entire gamut of bilateral relations as well as regional and international issues of mutual interest".

India considers Jordan an "oasis of stability and harmony" in conflict-ridden West Asia and New Delhi would like to deepen bilateral ties with the country during the King's visit, official sources said. Both sides will alsolook to expand ties in a range of key areas including defence and security.

On March 1, King Abdullah will deliver a special address on 'Promoting Understanding and Moderation', organised by India Islamic Center, in the national capital. During the visit, the two sides are expected to sign MoUs/Agreements in diverse areas of bilateral cooperation.

Prime Minister Narendra Modi went to Amman on the first leg of his tour of three West Asian countries on February 9 and met King Abdullah II and said he had a "wonderful" meeting that would further boost India-Jordan ties.

King Abdullah II ascended the Throne of the Hashemite Kingdom of Jordan on February 07, 1999, on the day his father, King Hussein Bin Talal, passed away.