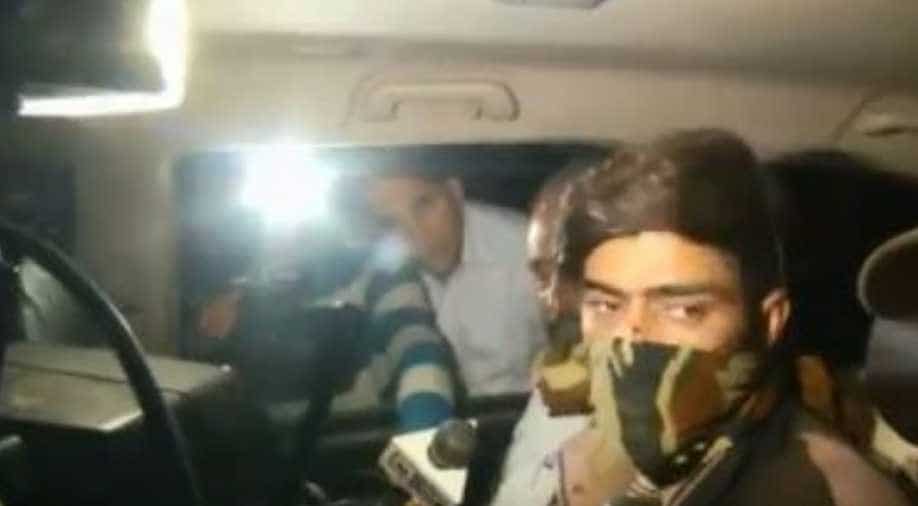 The suspected suicide bomber in police custody. Photograph:(ANI)
Follow Us

Owais Amin Rather had allegedly tried to attack a CRPF convoy in Jammu and Kashmir's Banihal on Saturday.

Jammu and Kashmir Police said Monday that the suspected suicide bomber they had arrested earlier during the day had confessed to trying to attack a CRPF convoy on Saturday in Banihal.

"The accused Owais Amin has been arrested within 36 hrs of the incident. During interrogation, he confessed to the crime. He is a resident of Shopian," Jammu and Kashmir DGP Dilbagh Singh said.

"I was asked on phone to explode the convoy. My task was to drive the car and press the switch. I pressed the button while I was in the car. I was alone when I did it," Amin told reporters on Monday.

#WATCH Confession of the accused in the car blast in Banihal, Ramban, after his arrest, today. #JammuAndKashmir pic.twitter.com/H2ABl6oj8o

Dilbag Singh, DGP J&K on the blast that occurred in a car near a CRPF convoy in Banihal, Ramban, on 30 March: The accused Owais Ameen has been arrested within 36 hrs of the incident. During interrogation, he confessed to the crime. He is a resident of Shopian. #JammuAndKashmir pic.twitter.com/rQy2jtIJ3V

A CRPF vehicle had suffered slight damage when a Santro car went up in flames after an explosion at Tethar village, 7 kms from Banihal, shortly after a Jammu-bound convoy crossed the Jawahar Tunnel on Saturday.

Owais Amin Rather, a resident of Wail village of Shopian district, was arrested Monday by a joint search party of police and the Army while he was trying to flee towards the Valley aboard a passenger vehicle, Sajad Sarwar, sub-divisional police officer (SDPO), Banihal had told PTI earlier.

The driver of the private vehicle managed to flee before the fire engulfed the vehicle and turned it into a mangled heap of iron.

The officer said Rather was booked under various sections of Ranbir Penal Code (RPC), including 307 (attempt to murder), 120B (criminal conspiracy), 121 (waging or attempting to wage war, or abetting waging of war), 121A (conspiracy to commit offences punishable by section 121) and 124 (sedition), besides under the Explosive Substances Act and the Unlawful Activities Act.

"He was produced before the Judicial Magistrate (first class) Banihal Monday and sent to eight days police remand," Sarwar said.

The officer said he was identified from the description gathered during investigation, including CCTV footage and the bruises which he had suffered to his face and other body parts while jumping out of the vehicle.

Sarwar said the accused confessed to his involvement in the crime.

"The accused crossed the Jawahar Tunnel into this side in pursuit of the target after failing in his attempt in the Valley and finally tried to blow up the vehicle on this side," the Deputy Superintendent-rank level officer said.

An inspection of the charred vehicle and surrounding areas had led to the recovery of an LPG cylinder, jerrycan filled with petrol, gelatin stick, urea and sulphur — material which is used for fabricating Improvised Explosive Devices (IED), police said.

A letter recovered from the scene had identified the driver as Hizbul Mujahideen operative Owais Amin, who mentioned his intention to carry out a February 14 Pulwama type terror attack. The attack had left 40 CRPF personnel dead after a Jaish-e-Mohammad (JeM) terrorist drove an explosive-laden vehicle and targeted the security personnel.