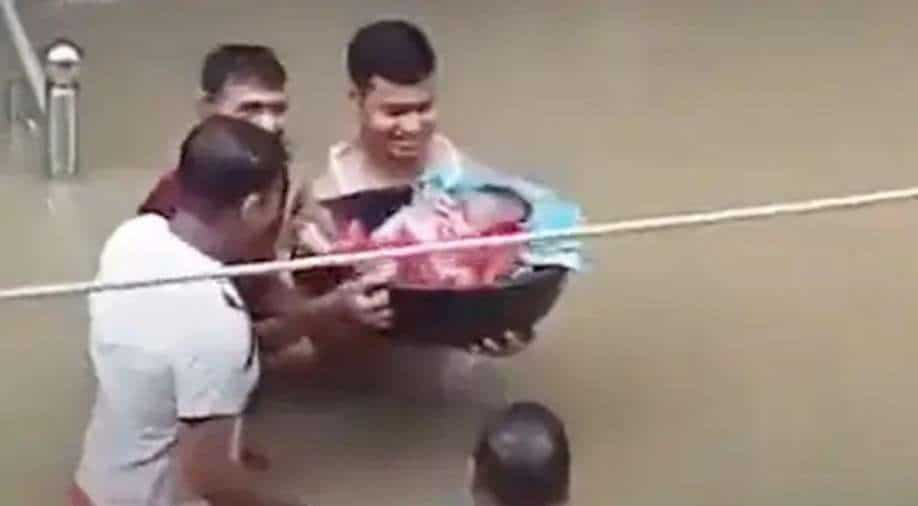 A video is becoming viral of a new born baby, moved safely in a basket, which people said reminded them of Lord Krishna.  Photograph:( AFP )

The death toll because of Assam floods has risen to 89 and over 5 million people are affected.. The government and disaster management agencies are giving Assam floods updates regularly. Also, a video is becoming viral of a newborn baby moved safely in a basket

India's northeastern state of Assam is suffering from heavy flooding. All major rivers are in spate, affecting over 5 million people and claiming 11 more lives. Bank erosion caused by the river Brahmaputra is one of the major reasons why Assam gets flooded every year. Due to erosion, the width of the river increases and it changes its course. Meanwhile, a video is becoming viral of a newborn baby being moved safely in a basket, which people said reminded them of Lord Krishna. The government and national disaster agencies are constantly giving Asaam floods updates and requesting people to stay indoors. Barpeta is the worst-hit district with over 1.2 million people being affected due to floods in the area. This was followed by Darrang with over 400,000 people hit by the deluge and Nagaon with over 440,000 people affected. Authorities are running 1,425 relief camps and distribution centres in over 25 districts. Also, 3.4 million animals remain affected in inundated areas, while 5,232 have been washed away by floods.

Death Toll rises to 89 and over 5 Million Affected people

Assam reported seven more deaths, which include three children on Tuesday. In the past 24 hours, 11 people have died, including 2 children, increasing the death toll to 89. Besides, seven more people went missing across five districts, the Assam Disaster Management Authority (ASDMA) said in its report. Rescue operations are underway. Over 1 lakh people are displaced. Three new fatalities were recorded in Darrang, two in Nagaon -- police personnel who got washed away while trying to rescue marooned people, and one each in Cachar, Dibrugarh, Hailakandi, Hojai, Kamrup and Lakhimpur. Seven people were reported missing, with two each in Udalguri and Kamrup and one each in Cachar, Darrang and Lakhimpur.

Check all the latest updates related to Assam Floods

Army led rescue operations are also going on in Assam. An army team helped evacuate a cancer patient in her 40s, stuck at her flooded home in Kamrup district’s Palepara vilage for three days, and sent her to an advanced healthcare centre in Guwahati. Three people in their 90s were also evacuated to safety from Kadamtola and Holapara village in Baksa district. They have rescued over a 100 people.
Over 10,000 people have been rendered homeless in Tripura due to the flooding caused by incessant rainfall since Friday. Union Home Minister Amit Shah also called up Chief Minister Himanta Biswa Sarma to enquire about the state of affairs, officials said. However, the situation has deteriorated further on Monday with the death toll rising. In all, 810 relief camps and 615 relief distribution centres have been opened in all the affected areas. According to a report by ASDMA, a total of 2,31,819 people are staying in the relief camps while over 1,13,485 hectares of crops have been damaged. The water in five rivers -- Brahmaputra, Kopili, Beki, Pagladiya, Puthimari -- is flowing above the danger level at several places.

Watch | Assam floods: Situation worsens in India's Northeast as half a million affected across 27 districts

An NDRF team from Bhubaneswar just landed at Silchar airport to help the administration intensify rescue & relief operation in the flood-affected town.

My gratitude to Adarniya HM Shri @AmitShah ji for promptly responding to our request to help tackle the challenge.@NDRFHQ pic.twitter.com/mIwMNZIWAL

Almost entire Assam is now under an unprecedented deluge. Situation becoming grimmer by the hour. And in situations like these, Assam Police personnel are offering exemplary service to the flood affected.@himantabiswa @CMOfficeAssam @mygovassam pic.twitter.com/mopYqB6hhT

ASDMA tweeted regarding distribution of Sanitary napkins and baby food,

They also tweeted about Rescue operations,

Viral Video of Father moving baby in a basket

Heartwarming picture from Silchar Floods!
This video of a father crossing the waters with his newborn baby in Silchar reminds of Vasudeva crossing river Yamuna taking newborn Bhagwan Krishna over his head!
Everyday is Father’s Day!@narendramodi @himantabiswa @drrajdeeproy pic.twitter.com/1PEfaiCxA5

Assam's CM tweeted about his visit to the flood-affected areas