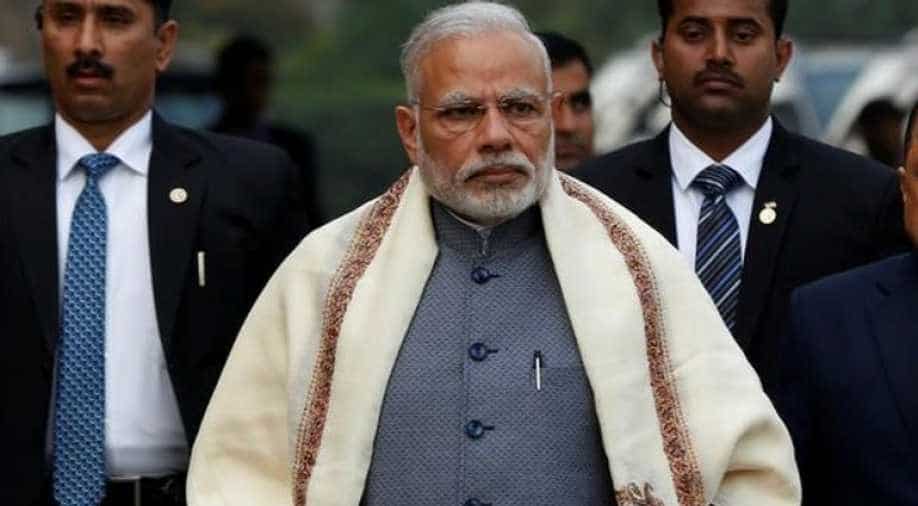 PM Modi began his Vadnagar visit on October 8 with a roadshow. Photograph:( Reuters )

A visibly happy Prime Minister Narendra Modi was greeted with chants of "Modi Modi" as he undertook a roadshow in his hometown Vadnagar on the second day of his Gujarat visit on Sunday.

PM Modi, who was born in Vadnagar is visiting his hometown for the first time after becoming the prime minister in 2014.

While addressing a public meeting in his hometown, PM Modi said, "Whatever I am today is because of the values taught by this land." "I will go back with your blessings and assure you that I will work even harder for the nation."

"Immense love showered by people of Vadnagar gives me new energy to serve the nation with more zeal, the PM added.

He also criticised the Congress-led UPA government's health policy and said it did not pay attention to increasing the number of seats in medical colleges.

"Till the time Prime Minister Atal Bihar Vajpayee's government was in power 15, 16, 17 years back, our country made its health policy. After that for the next 10 years, a government came that hated development," PM Modi said.

"Due to the rules formulated by the past governments, very few students were able to secure admission in the medical colleges. Thus, we have taken up the task of opening one medical college for (every) three to four Lok Sabha constituencies across the country," PM Modi said.

The roadshow was followed by a visit to his school, after which the Indian PM offered prayers at the Hatkeshwar Temple.

#WATCH: #Visuals of Prime Minister Narendra Modi as he reached his school in #Vadnagar, #Gujarat pic.twitter.com/hIl6DRgI25

He next dedicated Vadnagar's Rs 500 crore multi-speciality GMERS Medical College to the nation and interacted with the medical students in the classroom.

The railway station where PM Modi helped his father sell tea as a child has been decorated with flowers. A photography exhibition is underway nearby giving an insight into the childhood of the prime minister.

The Prime Minister's next stop was the city of Bharuch where he laid the foundation stone for the Bhadbhut Barrage to be built over Narmada River and flagged off the Antyodaya Express between Udhna in Surat and Jaynagar, Bihar.

PM Modi called the Antyodaya Express "a commendable initiative by Railways", and said it would make it easier for people from Uttar Pradesh and Bihar to go home for the Chhath Puja (festival).

PM Modi also addressing a public meeting in Bharuch before returning to Delhi.

Yesterday, while speaking at a function to dedicate the newly-constructed building of IIT Gandhinagar to the nation, PM Modi took a jibe at the criticism of the Ahmedabad-Mumbai bullet train which is being built.

The prime minister recalled that as Chief Minister of Gujarat, he had allotted 400 acres in the state capital for its campus in 2011.

He said some people would have gone all out to criticise him had the allocation been announced during elections in the state,  "the way they criticise bullet trains these days".

The prime minister was referring to the Gujarat elections which will be held later this year.

Yesterday, in Dwarka,  PM Modi also addressed the topic of GST and said the central government had made the tax simpler.

"It was like Diwali yesterday when we made some important changes in the Goods and Services Tax. I had already stated earlier that we would look into GST for 3 months and make changes, mend loopholes as per the experience. Centre has tried to make the tax simpler.

The PM the foundation stone for four national highways projects worth Rs 5,825 crore at Dwarka.

He also laid the foundation stones for a greenfield airport at Rajkot.