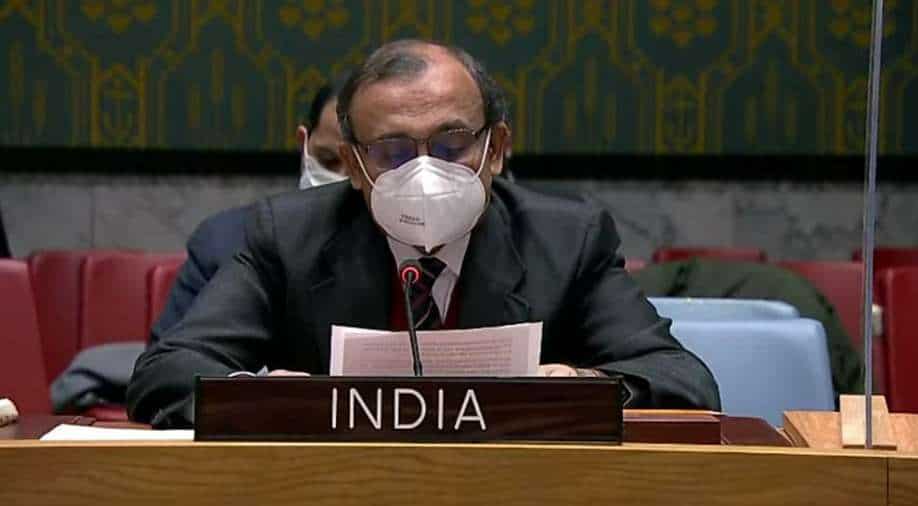 Ahead of the meeting at the UNSC, Russia called for a procedural vote on holding the US-initiated meet.

India on Monday called for "diplomatic dialogue" during a fiery meeting on the Ukraine crisis at the United Nations Security Council(UNSC).

Indian envoy to United Nations T S Tirumurti in the statement at the high table said," I reiterate our call for the peaceful resolution of the situation by sincere and sustained diplomatic efforts to ensure that concerns of all sides are resolved through constructive dialogue".

Ahead of the meeting, Russia called for a procedural vote on holding the US-initiated meet. India, along with Gabon and Kenya abstained during the vote. Russia and China voted against holding of the meeting.

But the US bid to hold the meet was successful as it was able to get ten votes in all - US, France, UK, Brazil, Albania, Ghana, Norway, Mexico, UAE and Ireland. Nine votes were needed to hold the meeting. The Russian representative to the UN thanked countries who abstained and voted against holding the meet at the UNSC.

The meet comes even as Russia and the West led by the United States have been on the brink over Ukraine.

Russia has amassed troops at the border with Ukraine with the West worried over a possible invasion, something Moscow has dismissed.

The Indian envoy said, "India’s interest is in finding a solution that can provide for immediate de-escalation of tensions taking into account the legitimate security interests of all countries" and "aimed towards securing long term peace and stability in the region and beyond."

Russia wants security guarantees from the West, including promises that Ukraine will not join the NATO alliance.

A number of rounds of talks have taken place between Russia and US over the crisis, including the one between US Secretary of state Blinken and Russian foreign minister Sergey Lavrov.

The Indian envoy called for "quiet and constructive diplomacy" and to avoid "any steps that increase tension" while welcoming efforts under the Minsk agreement and the Normandy Format.

The Minsk pact came into being in 2014 between Russia, Ukraine and Organization for Security and Co-operation in Europe (OSCE) and calls for a ceasefire in eastern Ukraine while giving autonomy to the Russian speaking areas.

The Normandy Format which has Germany, Russia, Ukraine and France as the key components played a key role in drafting the Minsk agreement.

The meeting, the envoy Tirumurti highlighted involved "well being of Indian nationals is of priority to us". More than 20,000 Indian students and nationals live and study in different parts of Ukraine, including in its border areas. The Indian mission in Kyiv has started to collect data on the number of Indian nationals in the country.

The envoy also confirmed that New Delhi has been in "touch with all concerned parties".