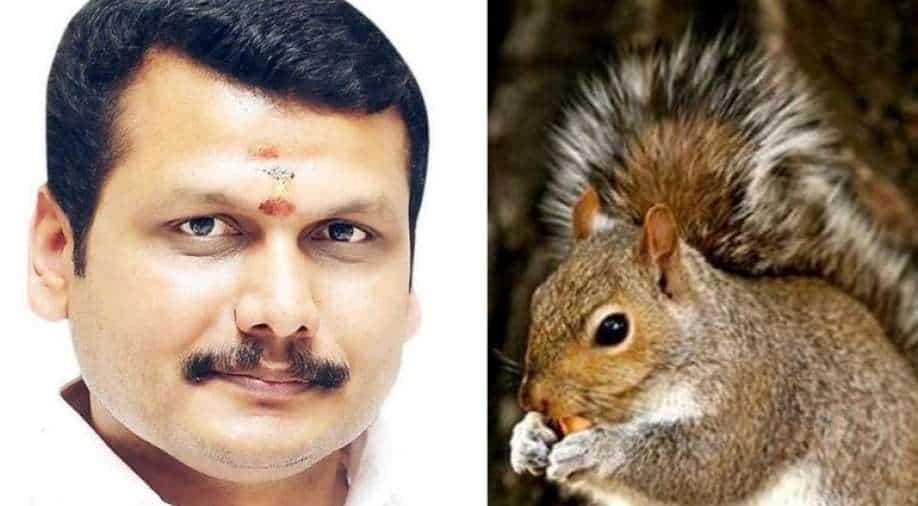 Netizens are having a field day, thanks to Tamil Nadu Minister Senthil Balaji’s comments on squirrels running on overhead power lines and causing disruptions in service.

Clips of the comments made by the DMK’s Karur MLA and Electrictiy Minister have been going viral on social media and instant messaging platforms. The Tamil equivalent of "Squirrels are the reason" has been an Indian-level Twitter trend, with over 12,000 tweets on Wednesday.

There have been reports of increased power cuts across the state since the new DMK regime came to power. Addressing the media regarding this issue, the minister replied that when tree branches come in contact with power lines, squirrels running on them, lead to two wires coming into contact, thus, causing power outages.

Later, speaking at the assembly, the minister had said that the previous AIADMK government had not carried out maintenance work for Electricity Board connections. He added that there would be no power cuts after the maintenance works were carried out.

However, the AIADMK has maintained that Tamil Nadu was a power surplus state during its rule and the party handled peak power demand efficiently and that there were hardly any power cuts.

Opposition politicians and netizens have been trolling the ruling party for the minister’s comments and asking if squirrels ran underground and whether the population of squirrels had increased after the new government took over. Frequent power cuts were among the taunts that the AIADMK-BJP combine had used against the DMK during the election campaign.

Many are comparing the minister's comments to an instance where an AIADMK Minister Sellur Raju attempted to cover a dam with thermocol sheets to prevent the evaporation of water, during the previous regime. While many sheets were placed in the water, they were later blown ashore, thanks to the strong winds in the open area.

In several Western countries, there are instances of squirrels causing power disruptions, but such reasons are unheard of in the southern Indian state of Tamil Nadu.