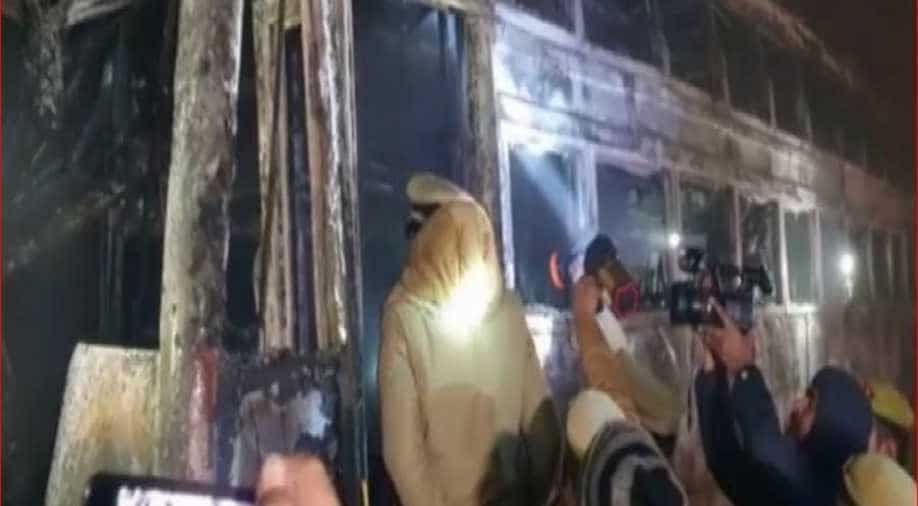 A bus travelling from Kannauj to Jaipur collided with a truck at Dewar Marg in Kannauj.

As many as twenty people are feared dead after a double-decker bus carrying at least 45 passengers collided with a truck at Dewar Marg in Kannauj district here late on Friday and went up in flames.

"A bus travelling from Kannauj to Jaipur collided with a truck at Dewar Marg in Kannauj, following which both went up in flames. Locals rushed to the spot and rescued several people from the bus," Inspector General of Police, Kanpur, Mohit Agarwal said on Saturday.

He said that 25 passengers have been safely rescued from the bus and are either receiving treatment at local hospitals or have been discharged.

"However, the remaining 20 people are unaccounted for. The bodies are badly burned, their bones are scattered, so only a DNA test by the forensic team will determine the death toll," Agarwal said.

"Prima facie the remains of 8-10 people seem to be on the bus but the damage is so extensive that casualties can be determined only through DNA test," he added.

Kannauj MP Subrata Pathak, who visited the spot, said that at least 20 people have died in the fire and several others have been injured.

Earlier, Kannauj District Magistrate Ravindra Kumar had said that several people reportedly escaped from the bus but did not visit the hospital and went home.

Uttar Pradesh Chief Minister Yogi Adityanath had expressed condolences over the collision and announced Rs 2 lakh each compensation for the deceased and Rs 50,000 each for those grievously injured in the incident.

Adityanath also sought a report of the incident from the District Magistrate.