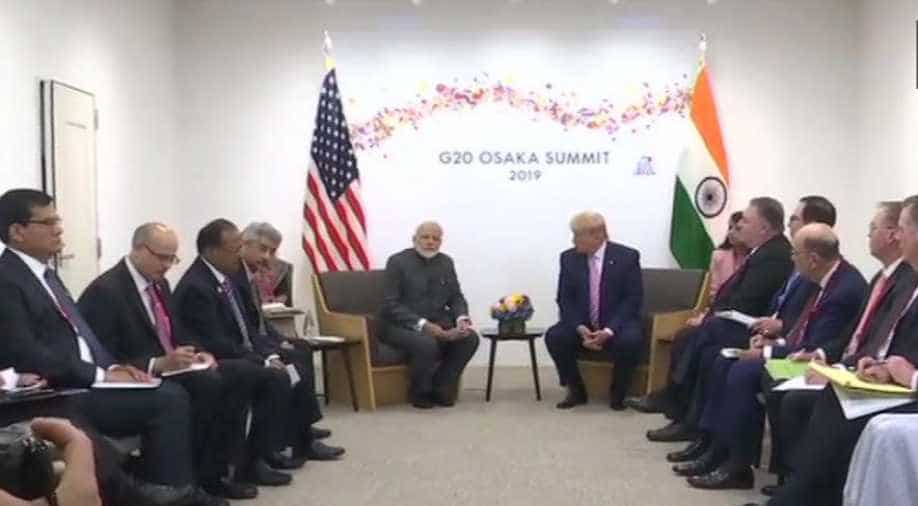 The two leaders met shortly after the Japan-America-India trilateral meeting during which Modi highlighted "the importance India attaches to" the grouping, the report added.

Prime Minister Narendra Modi on Friday held bilateral talks with US President Donald Trump in Osaka, Japan on the sidelines of the Group of 20 (G20) summit meeting on Friday.

The two leaders met shortly after the Japan-America-India (JAI) trilateral meeting during which Prime Minister Modi highlighted "the importance India attaches to" the grouping, the report added.

The Modi-Trump meeting assumes significance as the US president, championing his 'America First' policy, has been a vocal critic of India for levying "tremendously high" duties on US products.

Before his arrival in Japan on Thursday, Trump tweeted, "I look forward to speaking with Prime Minister (Narendra) Modi about the fact that India, for years having put very high Tariffs against the United States, just recently increased the Tariffs even further. This is unacceptable and the Tariffs must be withdrawn!"

This was Modi's first meeting with Trump after the BJP's landslide win in the parliamentary election.

The US President said he would be talking about trade with Indian Prime Minister Narendra Modi when the two leaders sit down for a bilateral meeting on the sidelines of the Group of 20 (G20) summit meeting on Friday.

Trump was speaking to reporters in the host city of Osaka, western Japan, ahead of a trilateral meeting with Modi and Japanese Prime Minister Shinzo Abe.