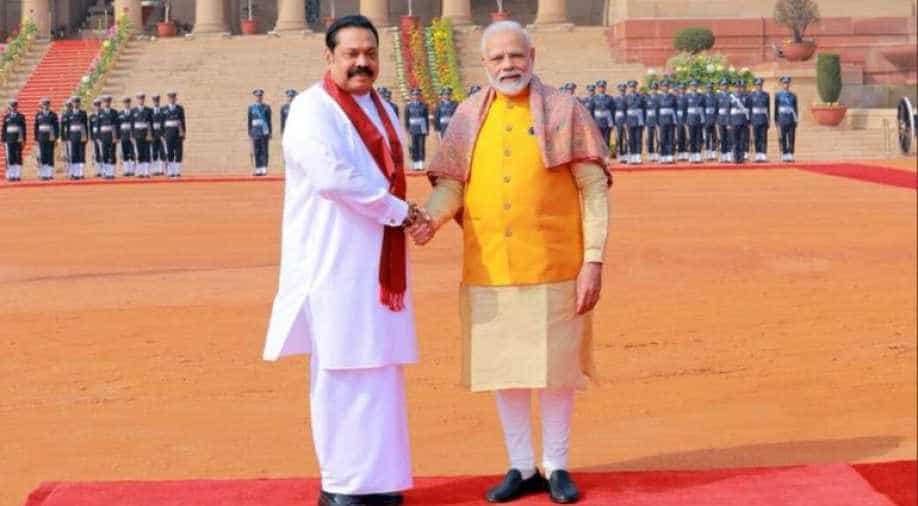 The friendship between India and Sri Lanka has had many dimensions and common threads. Culture, spirituality, art, language and religion.

Sri Lankan prime minister Mahinda Rajapaksa is winding up his four-day visit to India. His official engagements got over in two days but the major highlight of his visit has been his religious tour.

After Kashi Vishwanath, he visited Sarnath, Bodh Gaya and Tirupati both Sarnath and Bodh Gaya are visited by Buddhists the world over.

Before his return, Rajapaksa made the right noises. He praised PM Modi's 'Namami Gange' project. The river is a cultural and spiritual symbol and supports 40 per cent of India's population.

Before leaving #Varanasi, I had the honour of visiting the sacred River Ganga. I commend PM @narendramodi’s #NamamiGange effort, not only because of the river’s spiritual and cultural significance but also because it is host to approximately 40% of #India’s population. pic.twitter.com/kQ5Vedyju3

Rajapaksa's visit holds a deep meaning for India. But this visit by the Sri Lankan PM stands out for his massive temple outreach.

What should India readout of this religious tour?

The friendship between India and Sri Lanka has had many dimensions and common threads. Culture, spirituality, art, language and religion.

For a majority Buddhist country like Sri Lanka, India holds a special place.

So after Prime Minister, Mahinda Rajapaksa arrived in India. He used the common thread of religion to announce a new beginning in India-Sri Lanka ties.

Varanasi in Uttar Pradesh is his first stop on the religious circuit. He visited the famous Kashi-Vishwanath temple.

Varanasi is also the constituency which voted prime minister Narendra Modi to power.

His next stop was at Sarnath, 10 kilometres from Varanasi. Rajapaksa visited the Dhamek Stupa.

This is where Lord Buddha gave the first sermon after enlightenment. Rajapaksa offered prayers and received blessings from Buddhist monks.
He then headed to Bodh Gaya in Bihar.

Rajapaksa visited the holy bodhi tree where the lord received nirvana. The prime minister is now headed south to Tirupati in Andhra Pradesh

PM Rajapaksa returns to Sri Lanka on February 12. His visit bears stark similarity to that of PM Modi in May 2017. This was Modi's second visit to the island country.

The Indian leader visited the Gangaramaya temple in Colombo. He offered flowers at the buddha statue. Attended the biggest Buddhist festival of 'Vesak day'. Addressed an international Buddhist conference.

Both Rajapaksa and Modi are astute politicians. They are mass leaders and know what place religion holds in their respective countries

Sri Lanka is using religion as a plank to connect to India and Indian Buddhists. Rajapaksa has financially contributed towards Buddhist facilities in India

Through Sarnath and Bodh Gaya, Rajapaksa is weaving a thread of friendship. India too has been focusing on Buddhist diplomacy to connect with many countries in the region.

Buddhists may be a religious minority in India, but India is uniquely poised as the promoter of this faith.  Buddhism originated in India

India has numerous Buddhist sites of pilgrimage. India is home to the persecuted Buddhists of Tibet including the Dalai lama.

India has much to showcase to the Buddhists world over. An emphasis on Sri Lanka is only part of this initiative.