Sikh inmates to be kept away from Sajjan Kumar's ward in Delhi's Mandoli jail: Report 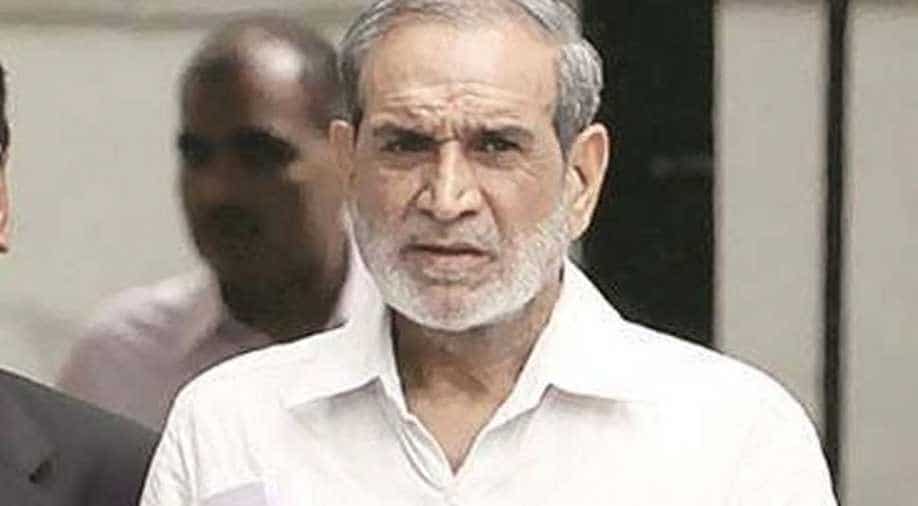 Kumar, sentenced to life imprisonment for his role in the 1984 anti-Sikh riots, was brought to the Mandoli jail after he surrendered before the Karkardooma court on Monday.

Sikh inmates will be kept away from former Congress leader Sajjan Kumar's ward in the Mandoli Jail complex in Delhi as a precautionary measure, jail sources said.

Kumar, sentenced to life imprisonment for his role in the 1984 anti-Sikh riots, was brought to the Mandoli jail after he surrendered before the Karkardooma court here on Monday.

The former Congress leader, who was brought to the jail by the police following his medical examination at a Delhi government hospital, would be lodged in prison number 14, the sources said.

They added that Kumar's medical examination by a jail doctor was also carried out.

He underwent a detailed medical examination owing to his age.He told the doctor that he was asthmatic and was suffering from body pain, they said, adding Kumar has also brought several medicines with him.

The sources said after the medical examination, he was led to ward number 1 and Sikh prisoners near that ward were shifted to other wards as a precautionary measure.

Security had been increased in jail number 14 and the personnel asked to ensure that the two-three Sikh prisoners lodged in the prison should be kept away from Kumar as a precautionary measure, they said.

On the first day of his jail stay, Kumar went without food, the sources said, adding he will not be given special treatment and treated like other prisoners.
He was brought to the jail complex in a separate prison bus with two escort vehicles, following the court's directions.

Kumar, 73, surrendered before Metropolitan Magistrate Aditi Garg, who directed that he be lodged in the Mandoli jail in northeast Delhi. The Delhi High Court had set a deadline of December 31 for the former Congress leader to surrender and on December 21, declined his plea to extend the time by a month.

The high court had, on December 17, convicted Kumar and sentenced him to life imprisonment for the "remainder of his natural life". Subsequently, Kumar resigned from the Congress party.

The case in which he was convicted relates to the killing of five Sikhs in the Raj Nagar Part-I area in the Palam Colony of southwest Delhi on November 1-2, 1984 and the burning down of a Gurdwara in Raj Nagar Part-II.

Kumar is the first big politician to be convicted in the riots. In its judgment on December 17, the high court noted that over 2,700 Sikhs were killed in the national capital, holding that the riots was indeed a "carnage of unbelievable proportions".

The riots broke out after the assassination of then prime minister Indira Gandhi on October 31, 1984, by her two Sikh bodyguards.