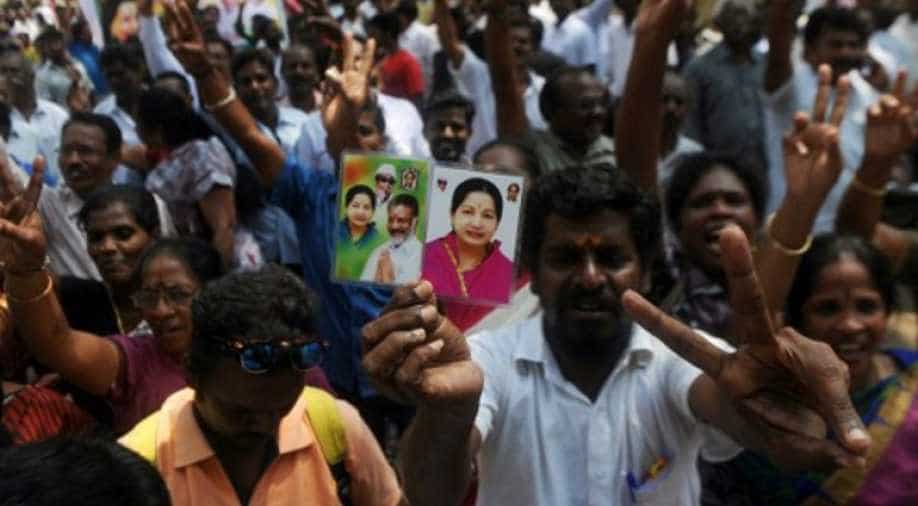 AIADMK supporters in front of the residence of the acting chief minister O Panneerselvam of the southern Indian state of Tamil Nadu in Chennai on February 14, 2017. Photograph:( AFP )

In politically significant remarks, the ruling AIADMK on Sunday said that signs of it working with the BJP like a "double-barrelled gun" in the political arena were visible and "no one can sever ties" between the two parties.

This is a major departure from the AIADMK's policy under late party supremo J Jayalalithaa who kept the saffron party at the arm's length when it came electoral alliance.

Coming down stronly on principal opposition DMK-led persistent protests over the Cauvery imbroglio, the AIADMK said "whatever be the number of protests and demonstrations, no one can sever the ties between the AIADMK and the BJP."

No one can weaken the bond between "the Central and the State governments" either, the AIADMK said in its Tamil mouthpiece "Namadhu Puratchi Thalaivi Amma."

The state's ruling party said the protests by the DMK, its allies and friendly parties on the Cauvery issue were only aimed at spoiling the warmth between it and the BJP, reported news agency PTI.

"The signs are (increasingly) becoming visible for the AIADMK and the BJP to work like a double-barrelled gun in Indian politics. The pathway is clear," the daily said while emphasising upon the need for the leadership of the two parties to chart out a roadmap for the purpose.

"A roadmap for it should be thrashed out by the high commands of both the parties. That is the need of the hour," the AIADMK mouthpiece added.

"The state and the Central regimes led by the AIADMK and the BJP respectively are working responsibly and are headed towards a final resolution of the issue," the daily said, referring to the Cauvery issue.

Under such circumstances, the AIADMK said, the main opposition DMK was holding "unnecessary protests" as it was "apprehensive" that the State and the Central governments, working in cohesion, would succeed in resolving the Cauvery issue.

Mocking the DMK for holding protests which did not enjoy the "people's support," the AIADMK hit out at its arch-rival for trying to get an appointment with Prime Minister Narendra Modi now on the issue after attempting to show black flags to him recently.

Asking if it was an act of "political civility," the AIADMK mouthpiece said no other party could indulge in such politics burying its self-respect.

The daily, however, asked if the protesters succeeded in showing even a single black flag to Prime Minister Modi.

Notably, the AIADMK's assertion comes days after asking the Centre to change its mindset over the Cauvery issue.

The ruling party, after holding a day-long fast across Tamil Nadu on the issue earlier this month, has announced rallies between April 25 and 29 in the delta region to press the Centre to implement the Supreme Court verdict on the matter.

Following the February 16 Supreme Court verdict, Tamil Nadu has been insisting that the court's order to the Centre to formulate a "scheme" referred to the setting up of the CMB and the Cauvery Water Regulatory Committee (CWRC).