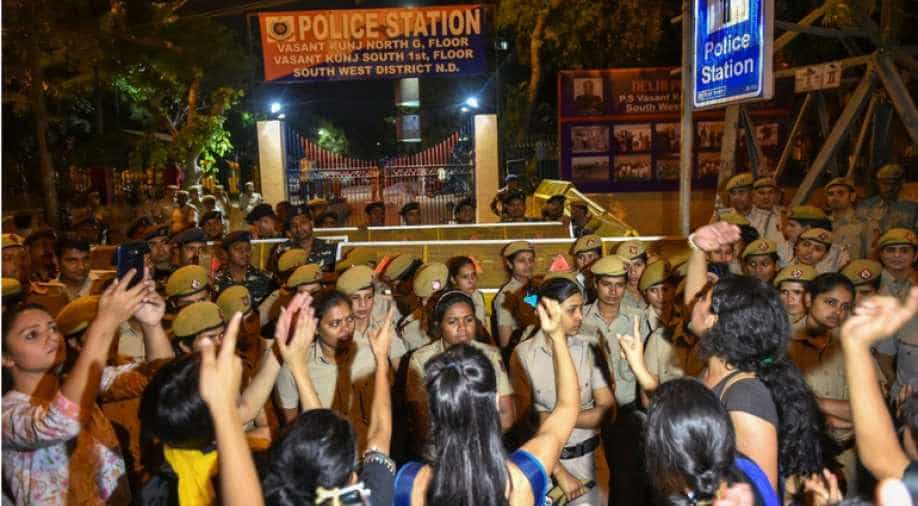 Delhi Police has arrested Professor Atul Johri of JNU on Tuesday after allegations of sexual harassment were leveled against him by students.

Delhi Police has arrested Professor Atul Johri of JNU after allegations of sexual harassment were leveled against him by students pic.twitter.com/wI8wj9K75d

Jawaharlal Nehru University (JNU) students, had been protesting outside the Vasant Kunj police station, demanding JNU professor's arrest in an alleged sexual harassment case, accused the police of "inaction" in the matter.

"Four days after eight women students came forward with sexual harassment complaints against the professor, no action has been taken against him and just one FIR has been lodged," Jawaharlal Nehru University Students' Union (JNUSU) vice-president Simone Zoya Khan said.

The police said a probe was on in the case. "A notice has been issued to the accused, asking him to join the investigation. The statements of the complainants have also been recorded," Joint Commissioner of Police (New Delhi) Ajay Chaudhary said.

The Delhi Commission for Women (DCW) on Tuesday issued a notice to the Vasant Kunj Police Station, seeking status report and reasons for not arresting JNU professor in a sexual harassment case.

The women's panel said it has received a representation from the students of the School of Life Sciences, Jawaharlal Nehru University, regarding the alleged sexual harassment of women students by the professor.

"The Commission considers this a serious matter related to the safety and security of the young women. Further, we have been informed that the complainants are protesting lack of arrest of the accused," the commission said, while seeking the information latest by March 23.

It has also issued a notice to the JNU registrar, seeking to know what safeguards have been taken to ensure the safety and security of the complainants and whether the present complaint is being looked into by the Internal Complainants Committee (ICC).

It also sought to know the composition of the ICC as well as the action taken by the committee in the matter till now.It further asked the Registrar if the complaints of sexual harassment against the accused have been registered in the past.

Students of JNU protest against JNU professor who is accused of sexually harsassing female students. (PTI)

"If yes. Provide details of the complaints so made. The action taken on those complaints," the Commission said in its notice.

"The present complaints appear to display a pattern of sexual assault at workplace. Hence, we recommend swift action in the matter and ensuring that the complainants are able to pursue their studies as well as their complaints in a free and fearless environment," it said.

The accused professor has, however, maintained that he is innocent. While he has resigned from two administrative posts in JNU -- the director of the Human Resources Development Centre (HRDC) and the director of the Internal Quality Assurance Cell (IQAC) -- on "moral grounds", he claims that the allegation against him was a "motivated move" by students with vested interests.

Professor of School of Life Sciences (SLS) has been accused of sexual harassment by a group of women students of the prestigious university. He has also been accused of financial irregularities.

Students of JNU protest against JNU professor who is accused of sexually harsassing female students at Vasant Kunj Police Station in New Delhi on Monday. (PTI)