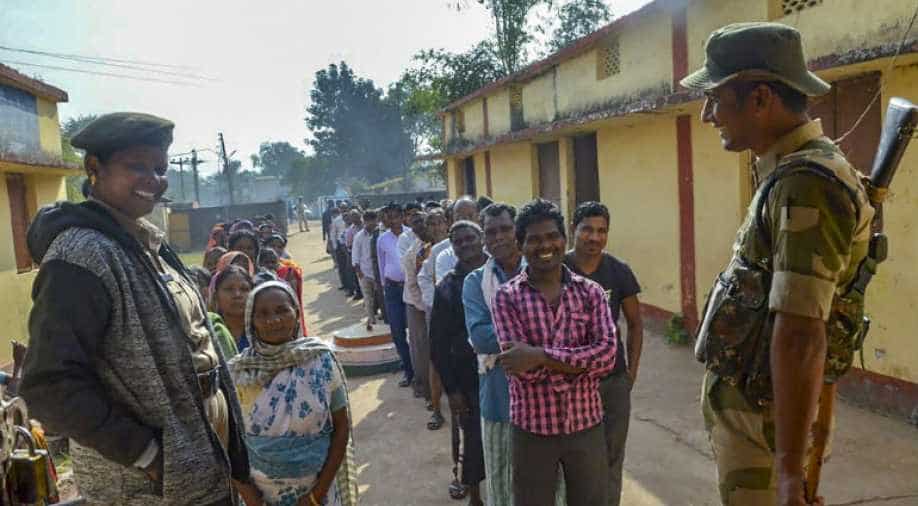 People queuing up to vote in first phase of Chhattisgarh polls. Photograph:( PTI )

Polling will be held from 8 am to 5 pm in these seats of central and north Chhattisgarh where as many as 1,079 candidates.

All arrangements have been made for the second and final phase of the Chhattisgarh Assembly elections to be held in 72 seats of 19 districts on Tuesday amid tight security, with the deployment of over one lakh police personnel.

The fate of nine ministers, assembly speaker and some other prominent leaders of the ruling Bharatiya Janata Party (BJP) as well as of the Congress will be decide in the polls.

In the first phase, polling was held in 18 seats of eight Naxal-affected districts on November 12.

Eyeing a fourth consecutive term, the BJP has set a target of winning 65 plus seats in the 90-member Assembly, while the Congress is seeking to end its 15-year exile from power in the tribal-dominated state.

The coalition between the Mayawati-led Bahujan Samaj Party (BSP), former chief minister Ajit Jogi's Janata Congress Chhattisgarh (J) and the Communist Party of India (CPI) has added a twist to the poll battle.

Polling will be held from 8 am to 5 pm in these seats of central and north Chhattisgarh where as many as 1,079 candidates, including 72 each from the BJP and the Congress, are in fray, an election official said.

As many as 19,296 polling booths have been set up for the second phase, the official said.

Over one lakh security personnel have been deployed to ensure peaceful polling, a police official said.

State Assembly Speaker Gaurishankar Agrawal has been retained from the Kasdol seat, which he had won against Congress's Rajkamal Singhaniya in the 2013 elections.

The Congress has this time fielded a fresh face, Shankutala Sahu, from the seat.

A three-way fight is expected in several seats of Bilaspur division where Ajit Jogi's party and the BSP have a considerable presence.

Jogi is contesting from the Marwahi segment where the BJP and the Congress have fielded new faces Archana Porte and Gulab Singh, respectively.

Of the 72 seats, 46 are for the general category, while nine are reserved for Scheduled Castes and 17 for Scheduled Tribes candidates.

Of these seats, the BJP had won 43 seats in the 2013 polls while the Congress had bagged 27. One seat each was won by the BSP and an independent candidate.

During the poll campaign, Prime Minister Narendra Modi, BJP president Amit Shah and other senior saffron party leaders targeted Congress chief Rahul Gandhi and his family and accused the opposition party of misleading people during its 50-year rule in the country.

The BJP also recalled the development works and achievements of its 15-year rule in the state.

The Congress, however, raised farmers' issues during the poll campaign and promised them loan waiver, bonus on paddy procurement and setting up food processing unit if it wins the election.

It accused the prime minister of remaining "silent" on the "corruption charges" against Chief Minister Raman Singh in the alleged Rs 36,000-crore civil supply scam and not acting against the chief minister's son Abhishek Singh in the Panama Papers case.

The chief minister and his son had earlier denied the allegations against them.

The first phase of polls in 18 seats of eight Naxal-hit districts had recorded over 76 per cent voter turnout.