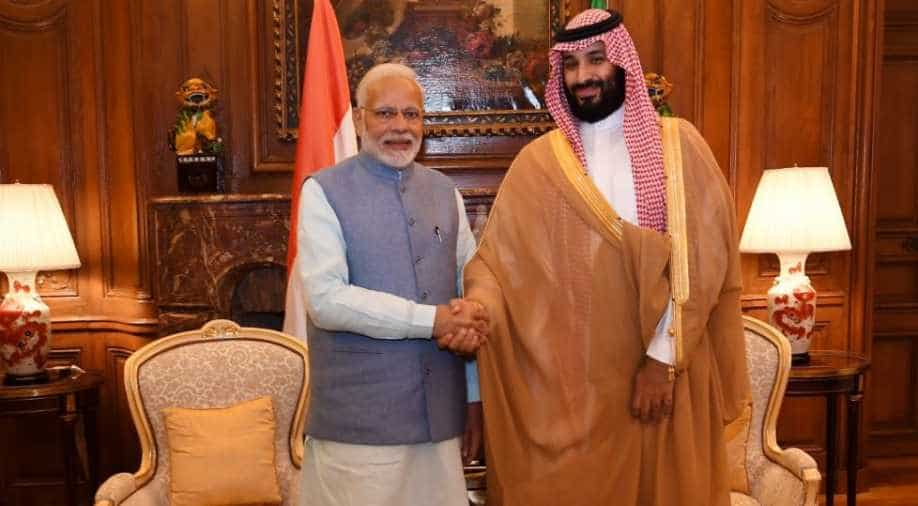 Salman has just visited Pakistan. He returned to Riyadh on Monday night however since India had reservations about him travelling to the country from Pakistan.

Saudi Crown Prince Mohammad bin Salman will land in New Delhi Tuesday, and India is expected to raise the spectre of Pakistan-sponsored terror with him.

Salman has just visited Pakistan. He returned to Riyadh on Monday night however since India, the news agency PTI quoted government sources as saying, had reservations about him travelling to the country from Pakistan.

The Saudi Arabian crown prince — the second-most important person in the country after the king — announced investments of $20 billion in Pakistan but India, in the wake of the Pulwama attack, is hoping Saudi Arabia will curtail funding to Pakistan should it not rein in the terror groups on its soil. (India may be drawing a distinction between investments and bailouts, like the $6 billion loan Saudi Arabia gave Pakistan in 2018. It is also expected that India will make little or no mention of the killing of Saudi journalist and Washington Post contributor Jamal Khashoggi.)

Over 40 CRPF personnel lost their lives in the Pulwama attack which was claimed by the Jaish-e-Mohammed. The Jaish is headed by Masood Azhar who is a Pakistani national.

Ahead of the crown prince's visit, Saudi Arabia's Minister of State for Foreign Affairs Adel al-Jubeir said in Islamabad on Monday that Riyadh will try to "de-escalate" tensions between India and Pakistan.

Official sources said Saudi Arabia was no longer accepting Pakistan's narrative on Kashmir and cross-border terrorism and that India will forcefully raise the issue of Pakistan's support to terror groups during delegation-level talks between Prime Minister Narendra Modi and the crown prince on Wednesday.

They said the joint statement to be issued after talks between the two sides is likely to have strong reference about terrorism and ways to deal with it.

Secretary, Economic Affairs in the External Affairs Ministry TS Tirumurti said both sides are expected to sign five agreements in areas of investment, tourism, housing and information and broadcasting during the Saudi leader's visit.

"We are confident that this visit will open a new chapter in India-Saudi bilateral relationship," he said.

Referring to cross-border terrorism, he said, "Saudi Arabia has strongly condemned and denounced the terrorist attack on Indian security forces in Pulwama on 14 February. We appreciate kingdom's cooperation in security and counter terrorism areas over the years."

Official sources said there has been a "change" in the way Saudi Arabia looked at relations between India and Pakistan and that the powerful Gulf nation has a better understanding of the cross-border terrorism.

"India has been identified as one of the eight strategic partners with whom Saudi Arabia intends to deepen partnership in areas of political, security, trade and investment and culture," said Tirumurti.

"As part of this engagement, we are finalising the setting up of 'Strategic Partnership Council' between the two countries at ministerial level. We are confident that this will give greater thrust to our strategic partnership and take forward our discussions in a focussed and action-oriented manner," he said.

The sources said the two sides are looking at a joint exercise between their navies, besides significantly ramping up overall defence cooperation.

They said Saudi Arabia has been providing India information and intelligence about various terror networks. The two countries had inked a pact on the exchange of intelligence related to money laundering and terrorism during Modi's visit to Riyadh in 2016.

The crown prince will be accompanied by a high-level official team as well as a large business delegation.

Modi will host a lunch in honour of the crown prince at Hyderabad House on Wednesday.

During PM Modi's visit to Saudi Arabia in 2016, an MoU on cooperation in exchange of intelligence related to money laundering and terrorism financing was signed.

Saudi Arabia is also a key pillar of India's energy security, being the source of 17 per cent or more of India's crude oil and 32 per cent of its LPG requirements.

Recently, Saudi ARAMCO in partnership with ADNOC of UAE agreed to partner in the Ratnagiri Refinery and Petro-Chemical project Ltd which is a joint venture worth $44 billion. The Indian partners are IOC, BPCL and HPCL.

"We hope to transform this buyer-seller relationship in energy to a broad-based partnership," Tirumurti said.

"We are also looking forward to greater collaboration in the area of civil aviation, where there is considerable potential for enhanced links, especially in the context of increasing trade, tourism and in enhancing convenience of travel," Trimurti said.

He also added that Saudi Arabia has conveyed to India that it will be joining International Solar Alliance initiative.

The crown prince is expected to travel to China from India.