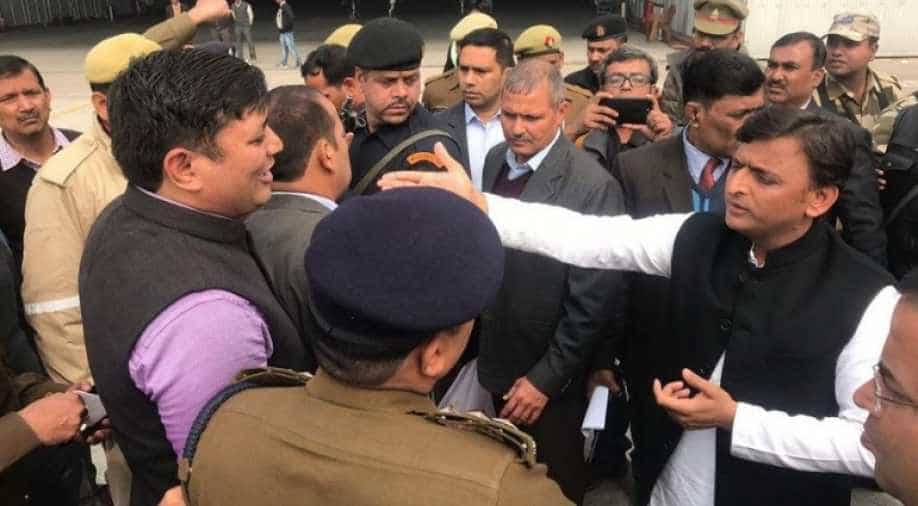 'The government is afraid of oath ceremony of a student leader and is stopping me at the airport to prevent me from visiting Allahabad,' Yadav said on Twitter. The Samajwadi Party chief was on his way to Allahabad University to attend a student leader's oath-taking ceremony.

Samajwadi Party president Akhilesh Yadav on Tuesday claimed he was stopped at Chaudhary Charan Singh International Airport in a bid to prevent him from visiting Allahabad to attend an oath-taking ceremony at Allahabad University.

"The government is afraid of oath ceremony of a student leader and is stopping me at the airport to prevent me from visiting Allahabad," Yadav claimed.

He also posted photographs in his official Twitter handle in which he was seen talking to police officers inside the airport.

I was prevented from boarding the airplane without any written orders. Currently detained at Lucknow airport.

It is clear how frightened the govt is by the oath ceremony of a student leader. The BJP knows that youth of our great country will not tolerate this injustice anymore! pic.twitter.com/xtnpNWtQRd

He said he had to attend an oath-taking ceremony at Allahabad University.

When asked, Airport Director AK Sharma said, "I have no such information."

My statement on the negative and undemocratic politics behind my detention at Lucknow Airport. pic.twitter.com/dP7MvdjOcT

As soon as Samajwadi Party members came to know about their national president being stopped at the airport, they tried to raise the matter during Question Hour in the assembly.

The members also trooped into the Well of the House due to which Speaker Hriday Narain Dixit adjourned the proceedings for 20 minutes during the Question Hour.

The matter was also raised in the Legislative Council, leading to the adjournment of the House for 25 minutes during the pre-lunch sitting.