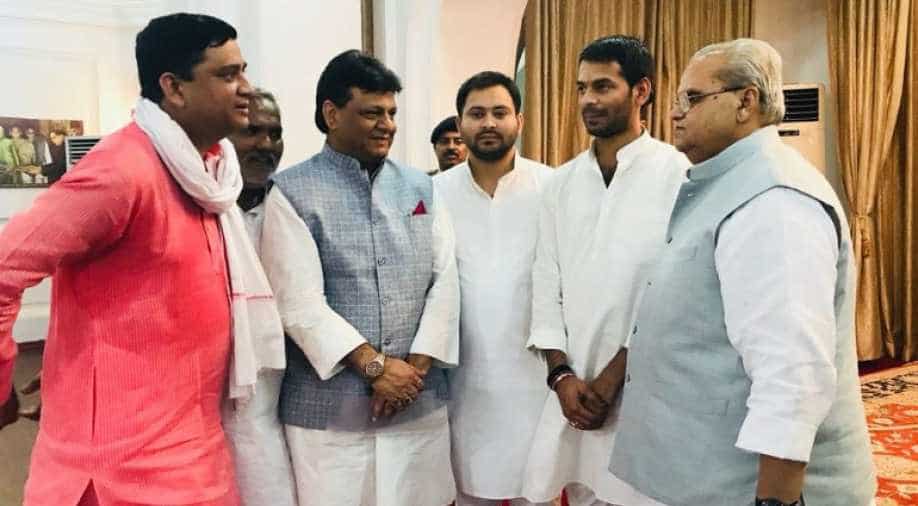 The parties handed over letters to the governor showing RJD as the single largest party in the assembly.

The meeting was organised&nbspto demand&nbspan invitation from the governor for forming the&nbspgovernment in the state.

The parties which joined the RJD in the meeting included Congress and CPI (ML).

RJD's Tejashwi Yadav had said yesterday that their party will hold a one-day protest against the ''murder of democracy''. He also said he will request Bihar Governor to dissolve the state government and like Karnataka invite the single largest party which in Bihar is RJD.

A similar meeting was organised by the Congress MLAs in Goa where they met the Goa governor and handed over a memorandum to her stating their majority.

The opposition's move has come after the BJP staked claim of the Karnataka state after emerging as the single largest party,&nbspless than the majority mark.

RJD and other alliance parties-Congress and CPI(ML) hand over letters to Governor Satyapal Malik stating that RJD is the single largest party hence should be invited to form Government pic.twitter.com/NdTSuvBsB0

Patna: Tejashwi Yadav and other alliance leaders met Bihar Governor Satyapal Malik, hand over letters stating that RJD is the single largest party and hence should be invited to form Government pic.twitter.com/K24yHxu3nH