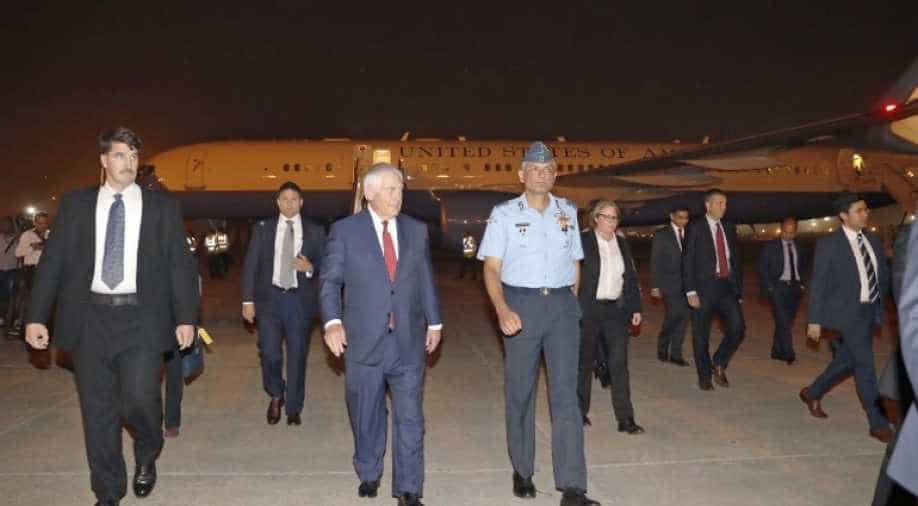 US secretary of state Rex Tillerson walks to his car after stepping off his plane as he arrives in New Delhi. Photograph:( AFP )

US secretary of state Rex Tillerson arrived in India late last night on a three-day visit after a stopover in Pakistan on Tuesday.

Ahead of his visit to India, speaking at the Centre for Strategic and International Studies in Washington last week Tillerson had said India must "take leadership role in regional security", a move which was hailed by the ministry of external affairs.

Tillerson is set to meet senior Indian leaders to discuss further strengthening of strategic partnership between India and the US and collaboration on security and prosperity in the Indo-Pacific region.

Tillerson met with Prime Minister Shahid Khaqan Abbasi on Tuesday amid reports of frayed relations between the two countries with the US openly reiterating the existence of "terrorist havens" in Pakistan.

On Monday, during an unannounced visit to Kabul, Tillerson had urged Pakistan to act against "safe havens" on its soil.

Tillerson, in the first major foreign policy speech on October 18 had said the US is India's "reliable partner" at the world stage in this period of uncertainty and angst, sending a strong signal to side with India amidst China's "provocative actions" in the region.

In the speech, he said the emerging Delhi-Washington strategic partnership stands upon a shared commitment upholding the rule of law, freedom of navigation, universal values and free trade.