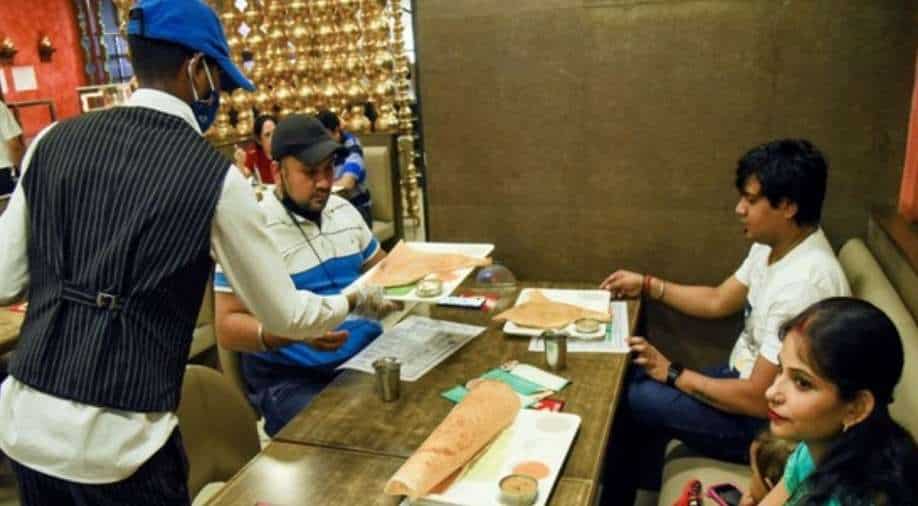 Central Consumer Protection Authority (CCPA) has issued five major guidelines regarding the the restaurants and hotels levying a heavy service charge on bills and forcing people to pay it. Photograph:( Twitter )

Restaurants and Hotels Service Charge: The Central Consumer Protection Authority (CCPA) has released some guidelines banning the hotels and restaurants from levying any service charge on customers and forcing them to pay it

India's consumer protection authority, known as the Central Consumer Protection Authority (CCPA) banned hotels and restaurants from levying any service charge on bills. The order came out on Monday. The authority said that the ban is put because of the increased complaints of the customers, who are forced to pay the service charge. CCPA has released a list of new guidelines regarding the same. Paying the charge or a tip is totally the customer's voluntary decision and they cannot be forced to pay the same. The department of consumer affairs (DoCA) also earlier said that it would develop a framework soon to ensure regulation of service charge and make sure that customers do not face any problems regarding the same. It negatively impacts consumers on a regular basis.

What are the new CCPA’s guidelines for restaurants and hotels?

Central Consumer Protection Authority (CCPA) has issued five major guidelines regarding the restaurants and hotels levying a heavy service charge on bills and forcing people to pay it. They are as follows:-

(i) Service charge shall not be added automatically or by default in the bill by any hotels or restaurants.

(ii) The Service charge shall not be collected by any other name from the consumers.

(iii) The hotel or restaurant must inform the customer that to pay the service charge is  voluntary, optional, and at the consumer’s discretion and they shall not force a customer to pay the same.

(iv) The hotels or restaurants cannot deny entry or services to a customer based on the collection of service charge.

(v) No service charge should be collected in the name of GST or adding it along the food bill's total amount in any way.

What is Service Charge by Hotels and Restaurants?

Restaurants often add a 5 per cent to 15 per cent tip to a customer's bill under a "service charge" category. It is the amount to pay for the work of the person who comes and serves you. In 2017, the government had said, "As per the approved guidelines on service charge, service charge is totally voluntary and not mandatory now. However still they were adding service charge even in some other name, because of which customers face a lot of problems and even there was a case in Noida recently, in which a person was beaten to death due to some fight over paying the service charge.

Which Indian Law do these guidelines come from?

The CCPA has issued these guidelines under the Section 18 (2) (I) of The Consumer Protection Act, 2019. These  guidelines come in addition of the 2017 guidelines by the government, which announced that service charge is completely voluntarily. A meeting was held on June 2, by the Department of Consumer Affairs under the Ministry of Consumer Affairs, Food & Public Distribution with restaurant associations and consumer organisations regarding the levying of service charges, after which it was announced that soon a framework would be released to solve the problems the customers are facing.

As a customer why these guidelines on service charge important?

The guidelines are very important for the customers because this can prevent them from being forced and sometimes even harassed to pay the service charges. Customers should be fully aware of these guidelines and should even make other people aware of it, so that they know about their rights. They can even lodge a complaint with the National Consumer Helpline number, which is 1915. Complaint can also be filed with the district collector or with the Consumer Commission.

During the meeting on June 2, that was held by the by the Department of Consumer Affairs under the Ministry of Consumer Affairs, Food & Public Distribution with the restaurant associations and consumer organisations, the hotel and restaurant representatives said that levying service charge is a “matter of individual policy” and that there is “no illegality in levying such a charge”. They also supported the levying of service charge saying that it would help the government as well as tax is also paid on it.

The government has recommended restaurants to pay fair wages to employees instead and increase product prices to meet the cost, instead of forcing customers to pay the service charge. Customers all over the country are very happy with the government's decision and got a sigh of relief. There is a hope that maybe now the customers can dine-in without any problems can enjoy without worrying about the service charge.