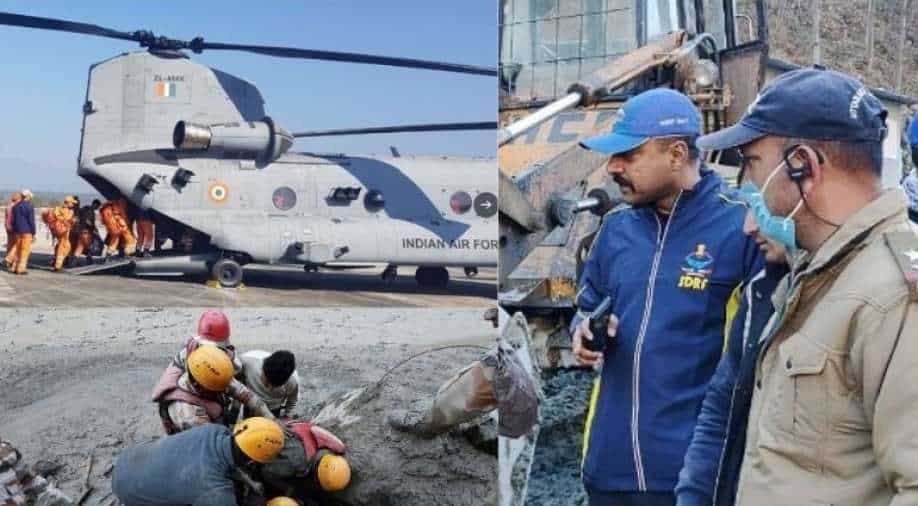 Reports say at least eighteen people have died and 200 are missing after the glacier burst led to an avalanche in Uttarakhand's Chamoli district.

The Indian Air Force(IAF) pressed Mi-17 and Chinook helicopters for rescue and relief operations as ITBP and NDRF forces continued to pull bodies from a tunnel near Tapovan, Chamoli in Uttarakhand after glacier broke off triggering an avalanche and a deluge in the Alaknanda river system on Sunday.

Reports say at least 34 people are trapped inside the tunnel in Tapovan with personnel from the Indo-Tibetan Border Police (ITBP), the National Disaster Response Force (NDRF) and other state disaster response teams working to clear the tunnel.

The tunnel is reportedly 250 metres long with  300 ITBP personnel currently deployed at the site with the NDRF helping the other forces. More teams have been sent to the site on IAF'S Mi-17 helicopters that landed at the helipad in Joshimath with agencies working in close coordination.

Teams from the Army, including from the medical Corps have also reached the Tapovan area to help in the rescue operations.

Reports say at least eighteen people have died and 200 are missing after the glacier burst led to an avalanche in Uttarakhand's Chamoli district.

The flash flood in Dhauli Ganga, Rishi Ganga and Alaknanda triggered panic among residents leading large-scale devastation in the mountainous areas as villages were evacuated even as several homes were swept away in the avalanche.

Meanwhile, state-run NTPC said that the avalanche has damaged a part of its hydropower project in Tapovan. The NTPC said, "An avalanche near Tapovan in Uttarakhand has damaged a part of our under-construction hydropower project Tapovan Vishnugad (520 MW) in the region. While rescue operations are on, situation is being monitored continuously with the help of district administration and likely loss or damage caused is being assessed. Appropriate insurance cover is available for the loss/damage caused."

Reports say several workers in two power plants on the Rishiganga dam are missing even as authorities have launched a massive rescue operation as main roads have washed away and the tunnel filled with sludge and rocks.