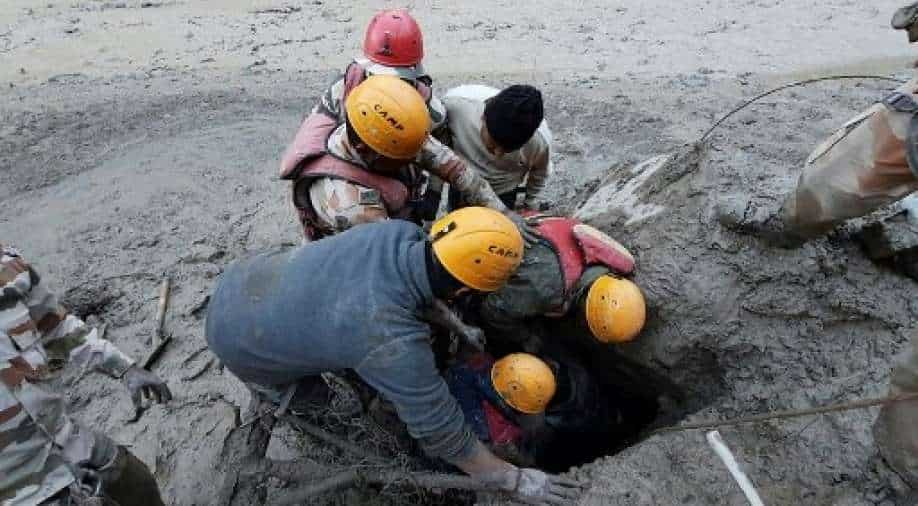 ITBP members during a rescue operation after a broken glacier caused a major river surge that swept away bridges and roads at Reni village in Chamoli district of Uttarakhand Photograph:( AFP )

Rescue teams pulled out at least eight bodies from a tunnel near Tapovan, Chamoli in Uttarakhand after glacier broke off in Uttarakhand on Sunday triggering an avalanche and a deluge in the Alaknanda river system.

On Sunday night, Uttarakhand police warned that water levels have been rising again in the region with people near the river bank in Chamoli being alerted.

Residents were jolted at around 10 am local time on Sunday after massive flash flood from Ganga river came hurtling towards them. The avalanche destroyed a hydel power project commissioned last year, including a motorable bridge.

Several people have reportedly been swept away including workers who were employed in the power project with a red alert issued in the area. ITBP, Indian Army, SDRF and NDRF forces have been deployed by the government for rescue and relief operations.

The Army has deployed at least 400 personnel in rescue operations and has sent two medical teams to the area.

Reports say more than 170 labourers are missing after the massive flash flood wreaked havoc even as chief minister Trivendra Singh Rawat announced four lakhs of financial assistance to each kin of the deceased.

Prime Minister Narendra Modi has also approved an ex-gratia of Rs 2 lakh each for the next of kin of those who have lost their lives due to the avalanche and an additional Rs 50,000 would be given to those seriously injured.

The US State Department said that it hopes for a speedy and full recovery of all those injured.

British Prime Minister Boris Johnson has stated that he is ready to offer any support to India, if needed. Prime Minister of Australia, Scott Morrison tweeted in support of India and said that his country stands with one of its closest friend in this time of difficulty.