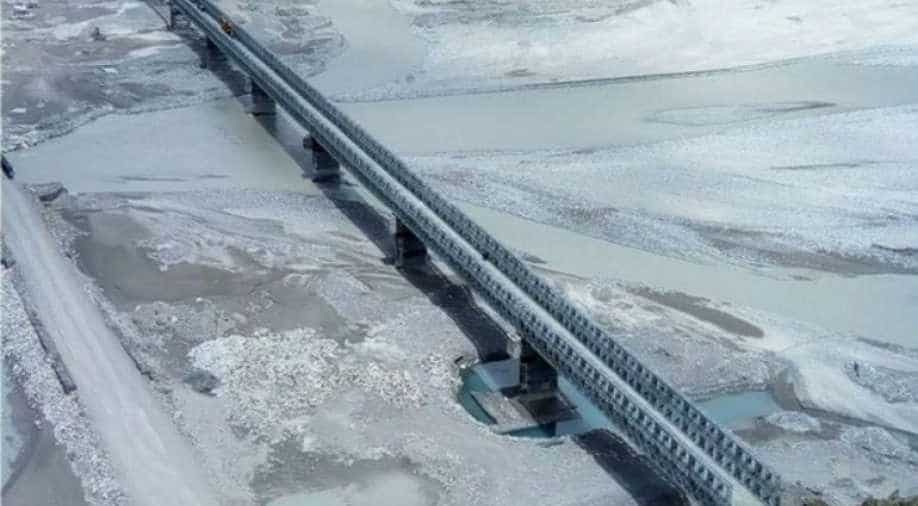 Col Chewang Rinchen Setu is 430-meter-long and has been constructed on Shyok river in Ladakh.  Photograph:( ANI )

The 430-meter-long bridge has been built by Border Roads Organisation (BRO) and connects Durbuk and Daulat Beg Oldie in Eastern Ladakh.

The 430-meter-long bridge has been built by Border Roads Organisation (BRO) and connects Durbuk and Daulat Beg Oldie in Eastern Ladakh.

"This bridge has been completed in record time. It will not only provide all-weather connectivity in the region but also be a strategic asset in the border areas," Singh said in a tweet after inaugurating the bridge.

The Defence Minister said Ladakh has tremendous potential in tourism, adding that "better connectivity in Ladakh would certainly bring tourists in large numbers".

"The Siachen area is now open for tourists and Tourism. From Siachen Base Camp to Kumar Post, the entire area has been opened for tourism purposes," he tweeted. He described the bridge as a symbol of the Centre`s resolve of bringing "positive change and all-round development" of the nation.

"Through initiatives like these, the people of this region will have the opportunity to become part of India`s growth story", he said, according to a Defence Minister release. Terming connectivity as one of the most important aspects of development, the Defence Minister said that new avenues can be opened through people-to-people contact.

Sandwiched between strategic Karakoram and Chang Chenmo ranges, the bridge is 430-metre long at an altitude of about 15,000 feet and has been constructed using micro piling technology.

The construction has been completed in record 15 months.

Col Chewang Rinchen, born on November 11, 1931, at Sumur, Nubra Valley in Ladakh region, is known as the "Lion of Ladakh" for his extraordinary acts of courage in defending Leh and Partapur sector.

"He is one of only six armed forces personnel to have been twice awarded the Maha Vir Chakra, the second-highest Indian Gallantry Award," the release said.