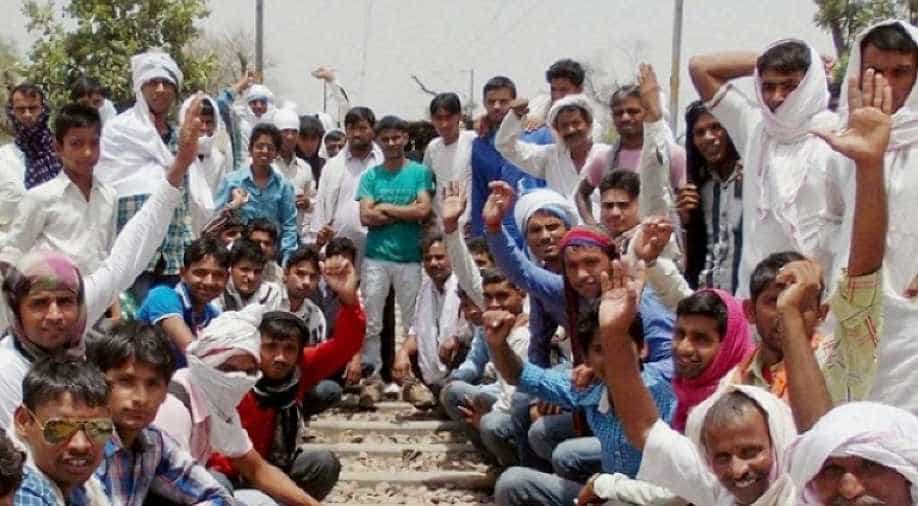 Rajasthan government on October 26, 2018, passed a bill which increased Other Backward Classes (OBC) quota from 21 per cent to 26 per cent.

Deputy district collector Suresh Bunkar said, “We have put this notice by the District Magistrate at his (Bainsla) residence for not following the directions of the High Court.

”Bainsla of the Gujjar Arakshan Sangharsh Samiti (GASS) had staged a 'rasta-roko' dharna on Friday at the railway tracks in Rajasthan's Swai Madhopur district, demanding implementation of the 5 per cent reservation that was promised to them by the state government.

Urging the Rajasthan government to act upon its promise Bainsla on Friday had said, “We want 5 per cent reservation. The state government hasn't responded to our request. So, we have decided to do an agitation to seek the government`s attention."

Last month on January 27, Bainsala asserted that if they were not given 5 per cent reservation in government jobs and academic institutions in next 11 days, they would be constrained to adopt the course of agitation.

As the "ultimatum" given by Bainsla ended on Friday, the Gujjar leader started the dharna with his supporters after holding a 'Maha Panchayat' at Malarna Dungar in Sawai Madhopur district.

Rajasthan government on October 26, 2018, passed a bill which increased Other Backward Classes (OBC) quota from 21 per cent to 26 per cent.

The Backward Classes (Reservation of Seats in Educational Institutions in the State and of Appointments and Posts in Services under the State) Bill will provide reservation to the five "most backward" OBC communities, including Gujjars and four other communities- Banjara,Baldiya, Labana; Gadiya Lohar, Gadoliya; Raika, Rebari, Debasi and Gadariya, Gadri, Gayari, which were earlier grouped as the special backward classes (SBC).

The government had tabled the Bill in assembly's monsoon session last year to provide reservation in educational institutions and state jobs for the category of more backward classes within the backward classes.

The Bill was tabled in the wake of widespread agitation by the Gujjar community demanding reservation under the backward classes category. However, with this quota of five per cent to OBCs, the total percentage of various quotas crossed 50 per cent. Now, the total quota in Rajasthan stands at 54 per cent- 26 per cent for OBCs, 16 per cent for SCs, and 12 per cent for STs.

This is in violation of the Supreme Court guidelines, which say the total quota in government jobs and educational institutes for different reserved categories in the state cannot go beyond 50 per cent.

Last year, the Rajasthan High Court had struck down government`s attempt to grant 5 per cent quota to Gujjars as it would have shot the overall reservation to 54 per cent.