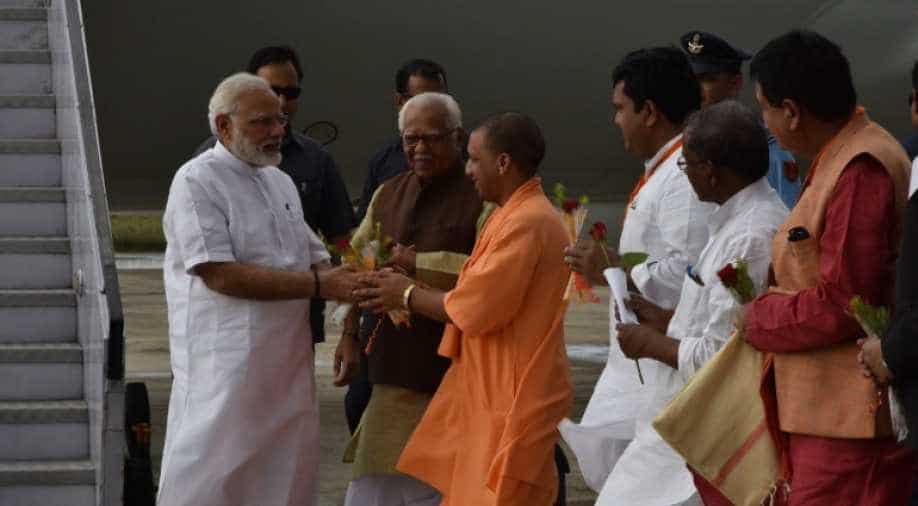 PM Modi was welcomed by Uttar Pradesh chief minister Yogi Adityanath as he touched down at the Varanasi airport. Photograph:( Twitter )

While addressing a public meeting, the Indian PM also lashed out at previous governments and said they seemed to hate development and "looted" public money to win elections.

"Development is the solution to all our problems. Previous governments seemed to hate development and looted public money to win elections," he said addressing a public meeting here.

After inaugurating several development initiatives, PM Modi said, "We not only launch but also complete projects."

He said his government's effort was to empower the poor. "Our aim is to see that the dream of development is fulfilled and lives of poor changes and they get opportunities."

Modi said even the poor people do not want their future generations to eke out a living like themselves. "No poor person wants to give their children their poverty in inheritance," Modi said.

He said his government shares their dream and is working to realise it. "Our government has a dream to wipe out poverty," he said.

The Indian PM, who is on a two-day visit to Varanasi, inaugurated a direct train service via a video link which will connect his home constituency to Vadodara and Surat in Gujarat. He also dedicated a weaving centre, the Deendayal Hastkala Sankul, to the nation.

The Mahamana Express will reach Vadodara via Madhya Pradesh. It currently runs on the Varanasi-New Delhi and the Bhopal-Khajuraho routes.

The train, which will be run as a special train, will reach Vadodara on Saturday. The 1,531-km journey between the two cities will take 27 hours and 30 minutes, officials said.

During his visit, PM Modi will also unveil plaques which will act as a foundation stone for various development projects in the city. He will also inaugurate the banking services of the Utkarsh Bank which specialises in micro-finance.

The trade facilitation centre, the Deendayal Hastkala Sankul, will enable weavers to showcase and sell their wares. It was the first project which was unveiled by the prime minister in the city's Bada Lalpur area upon his arrival.

PM Modi said his government wanted the works of weavers -- who constitute a major chunk of the city's population -- to be showcased globally so as to enhance their economic prospects.

"Our weavers need a global market which will enhance their economic prospects significantly," he said.

In the evening, the PM Modi will offer prayers at the historic Tulsi Manas Temple. The PM had tweeted yesterday that he looked forward to praying at the temple. He will also visit the Durga Mata Temple.

I look forward to praying at the historic Tulsi Manas Temple & Durga Mata Temple. A postage stamp on the Ramayana will also be released.

The Prime Minister will also launch a 'Jal Ambulance' service and a 'Jal Shav Vahan Sewa' in Varanasi.

PM Modi, who arrived in Varanasi by a special Indian Air Force aircraft, was welcomed by Uttar Pradesh chief minister Yogi Adityanath as soon as he touched down at the airport.