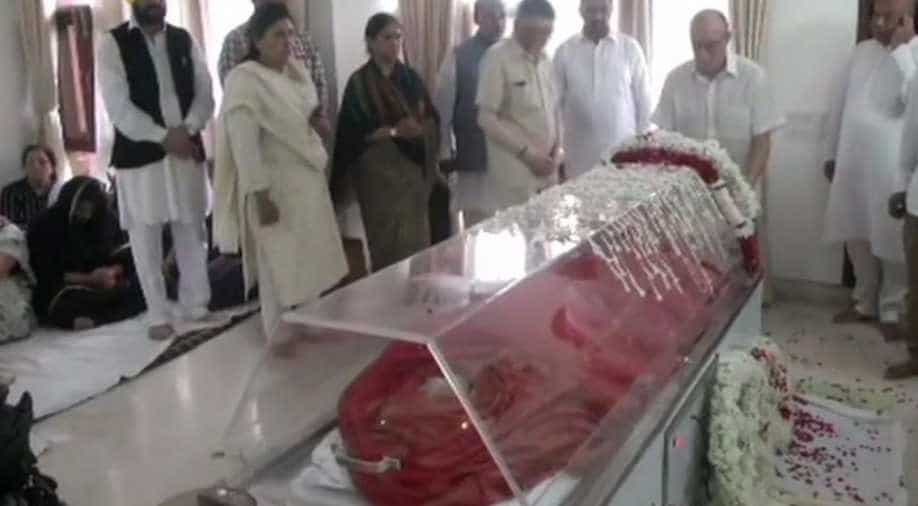 Sushma Swaraj was one of the most prominent faces of the BJP who immensely contributed to the party's growth. Photograph:( ANI )

Meanwhile, the Delhi government has announced a two-day state mourning on the sudden demise of Sushma Swaraj.

Wednesday morning saw political leaders and BJP stalwarts arriving at former External Affairs Minister Sushma Swaraj's residence to pay their tributes and get her glimpse for the last time.

Clad in white kurta-pyjama, PM Modi bore a sombre look on his face, paid his tribute to the 'Iron Lady' and went on to express his condolences to the Swaraj family.

He held on to Sushma's husband Swaraj Kaushal's hand and listened to him patiently.

Swaraj's mortal remains will be taken to the BJP headquarters later in the day from her residence. Her rites will take place after 3 pm, she will be cremated with full state honours.

Meanwhile, the Delhi government has announced a two-day state mourning on the sudden demise of Sushma Swaraj.

"There will be no cultural events during this period in the state," a statement from issued by Delhi government read.

Her rise in politics coincided in some ways with the growth of BJP as a party. She left a mark in roles as a union minister in the Atal Bihari Vajpayee government, as leader of opposition in the Lok Sabha from 2009 to 2014, and as External Affairs Minister in the first term of Narendra Modi government.

A four-time member of Lok Sabha and three-time of Rajya Sabha, she did not contest in 2019 Lok Sabha elections citing her bad health.

Swaraj was rushed to AIIMS, Delhi after suffering a cardiac arrest on Tuesday evening. She breathed her last after doctors failed to revive her after trying for over an hour.