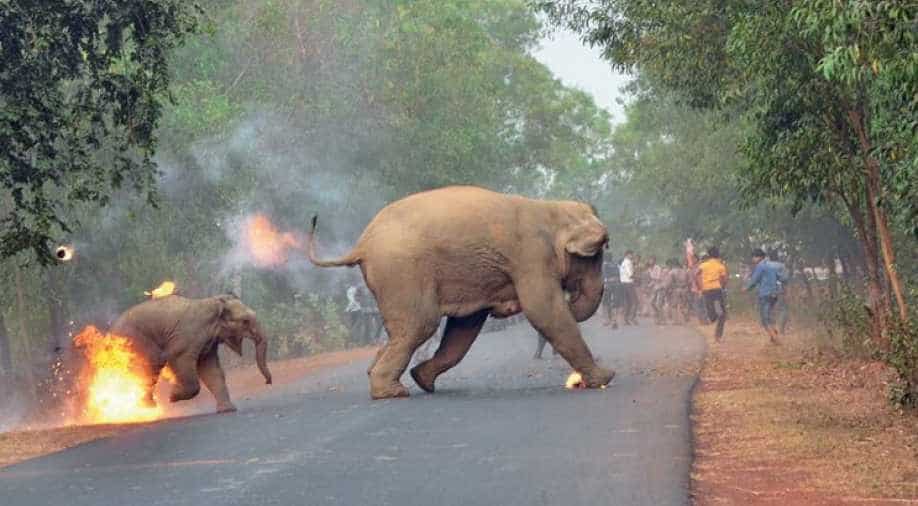 The photograph shows a mob hurling tar bombs and crackers at the elephants to scare away from a human settlement which was nearby.

A photograph showing an elephant and its calf fleeing an angry mob, have won the wildlife photography award for 2017 instituted by the Sanctuary Asia wildlife magazine.

The photograph titled 'Hell is Here' is clicked by Bipal Hazra, a wildlife photographer from West Bengal.

The photograph shows a mob hurling tar bombs and crackers toward the animals pushing them away from a human settlement nearby. The photograph is taken in West Bengal's Bankura district, an area which sees the large-scale man-animal conflict.

People on Twitter are furious after seeing this photo.

It’s really pain to read a news about a elephant calf put on fire ?? @drharshvardhan Sir you must take some action against it. ?? pic.twitter.com/nhc7ttpzd3

@narendramodi a heart-breaking photograph titled Hell is Here showing an Elephant and her Calf on fire fleeing a mob https://t.co/NG9FtgLSoh

Really? Are these #animals in jail yet or Indian!!! , I meant the real #animals who set them on fire? #photography https://t.co/LXMInsUw5o

human curelty have no limits putting elephant calf on fire is lower most level of human thinking/character.Shame https://t.co/SXjuHR5Oxv

To guide or direct them away is one thing. But to set a calf on fire? Dude ur a sadist. That’s beyond cruel. Really