Political parties in Jammu and Kashmir react to delimitation proposal 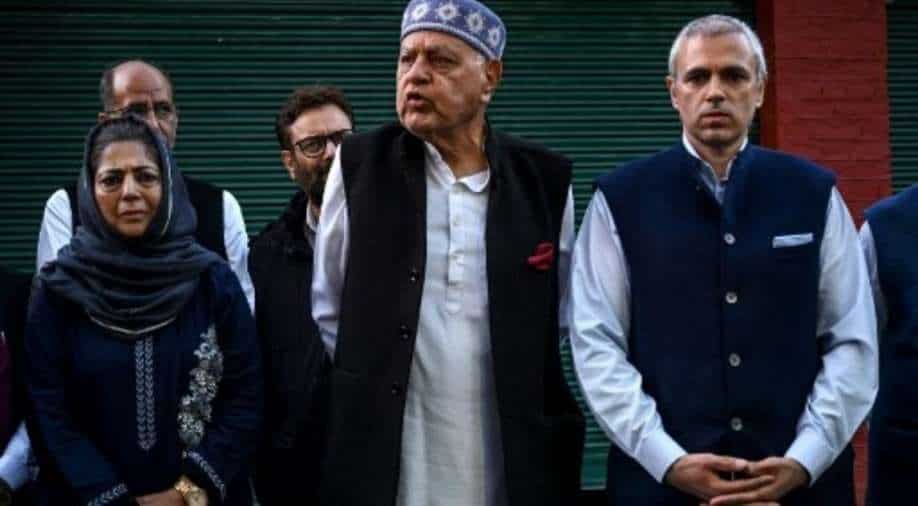 This is a file photo of Farooq Abdullah (C) with former Jammu and Kashmir CM Omar Abdullah (R) and other former CM Mehbooba Mufti. Photograph:( AFP )

Former Chief Minister Omar Abdullah, in a tweet said, that the proposal is "unacceptable"

The main political parties of Indian union territory Jammu and Kashmir have rejected the proposal given by the delimitation commission in New Delhi. The Commission proposes six additional seats for the Jammu region and one for Kashmir Valley.

This would make total seats in Jammu 43 and in Kashmir Valley, 47 and nine seats are proposed for Scheduled Castes (SCs) and Scheduled Tribes (STs).

Former Chief Minister Omar Abdullah, in a tweet said, that the proposal is "unacceptable". He tweeted, "The draft recommendation of the J&K delimitation commission is unacceptable. The distribution of newly created assembly constituencies with 6 going to Jammu & only 1 to Kashmir is not justified by the data of the 2011 census."

"It is deeply disappointing that the commission appears to have allowed the political agenda of the BJP to dictate its recommendations rather than the data which should have been it's only consideration. Contrary to the promised "scientific approach" it’s a political approach," he added.

The People Democratic Party (PDP) president Mehbooba Mufti also rejected the proposal and said, "My apprehensions about the Delimitation Commission weren't misplaced. They want to pitch people against each other by ignoring the population census & preposing 6 seats for one region & only one for Kashmir."

The PDP spokesperson while speaking to the media said "our apprehensions have come true".

"We have heard about the proposals that Delimitation Commission has put forward for Jammu Kashmir. This simply reflects what we have been saying for long. It's been done by BJP and how ththe eir party could gain out of it," PDP spokesperson Said Suhail Bukhari said.

"That is why commission has proposed 6 seats for Jammu and 1 seat for Kashmir, which is no way is justified. The agenda of BJP and today’s government is to divide the people in Jammu Kashmir on a regional and religions basis. The Commision has proven our party President Mehbooba Mufti right and we are rejecting this proposal," he added.

The newly formed J&K Apni Party also in a tweet said that they reject the proposal of the delimitation commission. The tweet said, "This is outrightly unacceptable to us. Apni Party demands a fair delimitation exercise without any bias, taking population and districts as the base. We strongly demand the GoI to intervene."