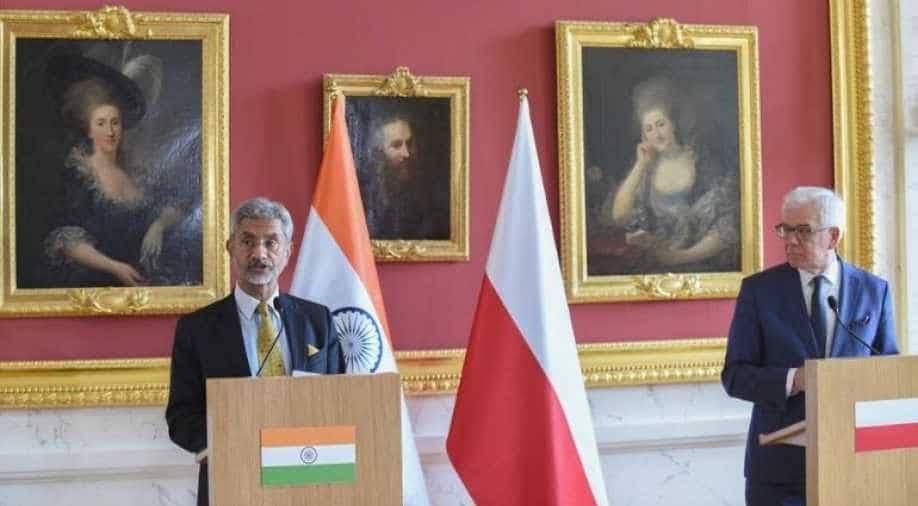 Polish Foreign Minister Jacek Czaputowicz (R) and his Indian counterpart Subrahmanyam Jaishankar address a press conference after their meeting in the Palace on the Isle in Lazienki park in Warsaw. Photograph:( AFP )

This is the first visit by Indian foreign minister to Poland since 1987.

Poland has assured India its support to deal with cross border terror issue during the visit of External Affairs Minister S Jaishankar to the country. EAM Jaishankar met his Polish counterpart Prof. Jacek Czaputowicz on Thursday.

The India Poland Foreign Minister in a joint statement said, "FM Prof. Czaputowicz expressed the commitment of Poland to support global efforts to combat terrorism in all its forms and manifestations, particularly cross-border terrorism."

During the half-an-hour face-to-face talks, Jaishankar appreciated Polish Presidency in United Nations Security Council. Poland as the UNSC chair had told Pakistani Foreign Minister Shah Mahmood Qureshi when he called him to brief on Kashmir that Warsaw is in favour of a dialogue between Pakistan and India to sort out differences.

"We exchanged views on a number of regional and global matters, especially in the context of Poland’s Security Council membership," Jaishanker said after press statements alongside the Polish foreign minister.

This is the first visit by Indian foreign minister to Poland since 1987. Visiting Indian minister expressed New Delhi's desire to engage with Poland under the Visegrad format, something he had talked about during his visit to Hungary earlier this week.

"We value Poland as a large and important country in Europe, as a key member of the European Union and as a pillar of the Visegrad-4. It is currently a member of the UN Security Council which is in itself a recognition of its stature", Jaishanker said.

Polish national carrier LOT will be starting direct flights from Warsaw to New Delhi from September 12 and Deputy Polish Prime Minister Piotr Gliński himself would be leading the Polish delegation on the inaugural flight.

Jaishankar was on a three-nation visit this week to Hungary, Russia and Poland.