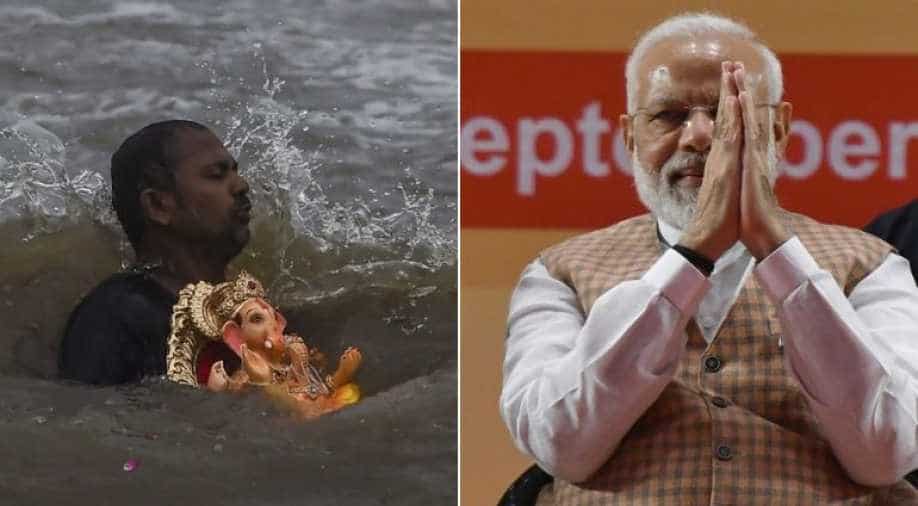 Prime Minister Modi said that during immersion of Lord Ganesha idols 'a lot of plastic and other waste goes into the sea'. Photograph:( AFP )

Prime Minister Narendra Modi on Saturday urged people to avoid throwing plastic and other waste materials into the seawater while immersing the idols of the Lord Ganesha.

After laying the foundation stone for metro projects, Prime Minister Modi said that during immersion of Lord Ganesha idols "a lot of plastic and other waste goes into the sea."

"This time we have to try that these materials which increase pollution are not immersed in water."

He also urged people of Mumbai to make the Mithi river and other water bodies plastic-free.

"In the last five years, we have made sincere efforts to improve the infrastructure of 'Amchi Mumbai'," Modi said in the presence of newly-appointed Maharashtra Governor Bhagat Singh Koshyari, Chief Minister Devendra Fadnavis and Shiv Sena chief Uddhav Thackeray.

"Ganpati Bappa Morya! Today I got the privilege of worshipping at the same place in Mumbai, where Ganpati was established a hundred years ago with the inspiration of Lokmanya Tilak," he tweeted.

He also said the metro network is being expanded in the region at a cost of about Rs 1.5 lakh crore.

"Till 2014, the metro was running in a few cities only. Today the metro in 27 cities in the country has either started or is about to start," Modi said.

During his monthly radio address to the nation, 'Mann Ki Baat', the Prime Minister had pitched for launching a "new mass movement" against single-use plastic from October 2, the birth anniversary of Mahatma Gandhi.

He also spoke about the initiative during the Independence Day address, urging people to join the movement.