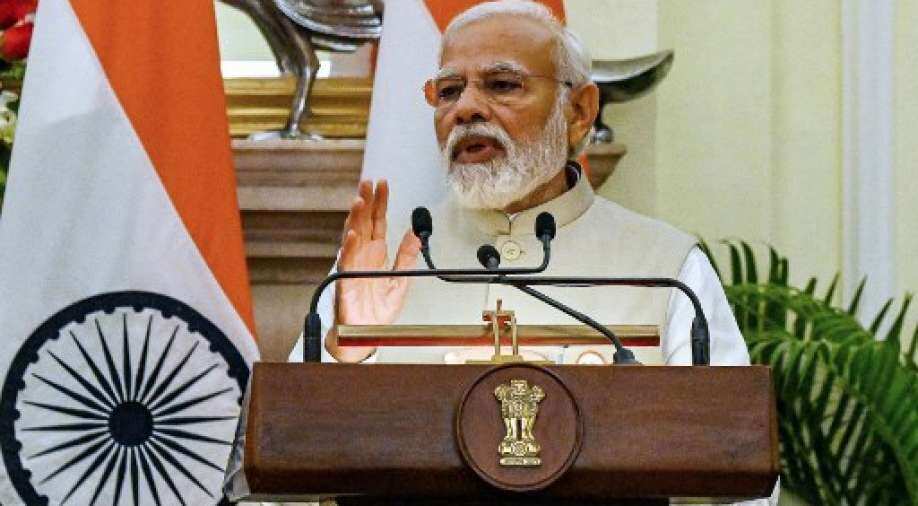 PM Modi will be meeting US President Joe Biden during the Quad summit in Japan Photograph:( AFP )

Indo-Pacific Economic Framework(IPEF) is a US economic initiative that is seen to integrate Indo-Pacific economies.

Indian Prime Minister Narendra Modi will be present at the launch of the Indo-Pacific Economic framework by US President Joe Biden on Monday in Tokyo.

Indo-Pacific Economic Framework(IPEF) is a US economic initiative that is seen to integrate Indo-Pacific economies. The arrangement is expected to cover issues like supply chains, setting of standards and rules in the digital economy, clean energy transformation and infrastructure investments.

It is not known as of now if New Delhi will join the initiative or support it in any manner. Ahead of PM Modi's departure in a presser, foreign secretary Vinay Kwatra said, "discussions and the conversations are still going on" while explaining, "one of the focus of prime minister's conversations during the Quad summit will be on the Indo-Pacific which is essentially one of the main areas of Quad’s focus and also within that space the economic dimension of the cooperation."

Earlier last week, the ministry of external affairs spokesperson Arindam Bagchi had confirmed that New Delhi has received the "details" of the initiative from Washington, and it is "examining it".

President Biden will be joined in-person by the Japanese PM Fumio Kishida and virtually by leaders from several Indo-Pacific countries from Southeast Asia to Northeast Asia for the launch of the mega initiative.

The full list of countries who are part of the initiative will be released on Monday but Taiwan is not part of it. The initiative is seen as a counter to China's Belt and Road(BRI) connectivity project under scanner for causing debt crisis in the Indo- Pacific. Beijing is not very pleased with the development and calls IPEF as a "closed club".

US NSA dismissing Beijing's criticism has said, "Suprise to me China has concerns. The diversity of countries who have expressed enthusiasm for the IPEF. Natural they will try to raise questions... it's flatly untrue it is closed. It is by design and definition it is an open platform" and "breadth of participation (on Monday) is such that it will show its anything but a closed club and wide-ranging membership".

Indian PM Modi leaves for Japan later today. On Monday he will hold meetings with the Indian community and Japanese business leaders.

On Tuesday, PM Modi will take part in second Quad in-person summit in the morning and will hold bilateral with American President Biden, Japan's PM Kishida and Australia's new PM Anthony Albanese in the afternoon.

Quad leaders will participate in the Quad fellowship event on Tuesday. The Quad fellowship was launched at the first Quad summit in Washington last year. The fellowship will sponsor 100 students per year—25 from each Quad country to pursue Masters and doctoral degrees at leading STEM graduate universities in the United States.

On the bilateral with President Biden, India's foreign secretary said, "The India-US relationship is multifaceted and has acquired momentum, has depth and is diversified. Our long-standing cooperation in diverse areas, ranging from trade, defence, security, climate, education, and energy, pretty much all aspects of human economic endeavour is on an upward trajectory. There is a regular exchange of visits and dialogue."

Meanwhile, US National Security Advisor Jake Sullivan on the bilateral pointed out that President Biden will have "constructive and straightforward" talks with PM Modi on the Russia-Ukraine conflict.

On the sidelines of the summit in Tokyo, PM Modi will have his first in-person bilateral meeting with Australia's new Prime Minister Anthony Albanese.