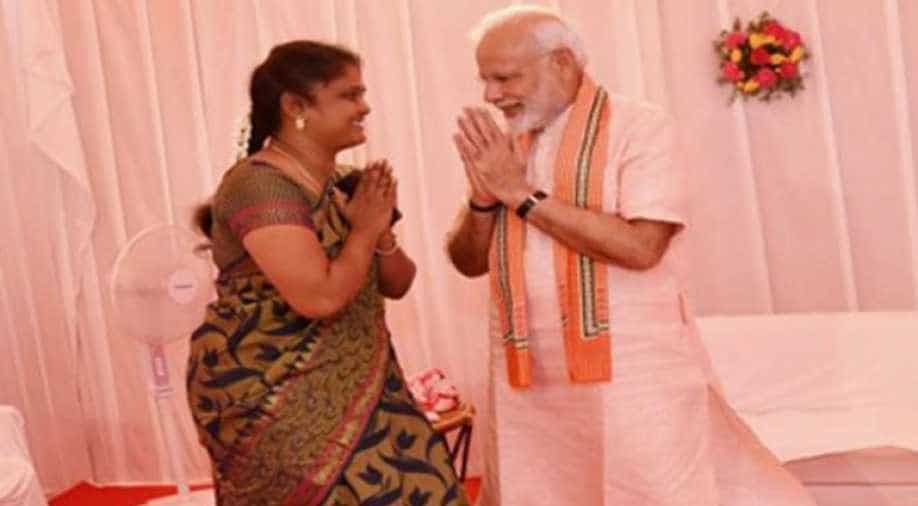 Earlier, when Arulmozhi Saravanan learnt about the Central government's Mudra Yojana for small entrepreneurs to get loans without collateral, she had applied for the same and obtained a Mudra loan for her business-to supply simple goods and products to government offices.

Arulmozhi Saravanan, a Mudra Yojana beneficiary, met Prime Minister Narendra Modi Narendra Modi in Madurai on Sunday during his visit to the city to lay the foundation stone of All India Institute of Medical Sciences (AIIMS).

Earlier, when Saravanan learnt about the Central government's Mudra Yojana for small entrepreneurs to get loans without collateral, she had applied for the same and obtained a Mudra loan for her business-to supply simple goods and products to government offices.

When she heard of the GeM, she herself registered on it. In 2017, while browsing the GeM site, Saravanan noticed that the PMO was interested in purchasing a few thermo flasks, which she could supply. She responded, and soon PMO confirmed the order.

The flasks were later supplied, and the payment was made to Saravanan.

Saravanan shared this story with Prime Minister Modi, through a letter. The Prime Minister later mentioned it on his 'Mann Ki Baat' programme in mid-2017.
It is worth mentioning that in her letters to PM, she addresses PM Modi as her father.

Thereafter, by supplying products to various offices, her business grew. Recently, she wrote to the Prime Minister again, informing him of the updates in her business, and the transformation in her life.

Interestingly, the turnover of her enterprise has crossed Rs 1 crore in the current financial year. It all started with an order of Rs 234 on GeM.

Saravanan, who earlier used firewood for cooking, now has moved over to a gas cylinder.

She is now planning to give up her cooking gas subsidy. Next on her agenda will be a home loan.

She said that her experience using GeM makes her believe that it is a great platform for the government offices to save public money. For her, GeM is now not just a means to a business. She describes it as a service to the nation.

Saravanan also believes that doing business has become easier after the implementation of Goods and Services Tax (GST).

From Mudra to GeM to GST, Saravanan, undoubtedly, is just one illustration of how the government's reforms are working on the ground to improve the ease the people's life.