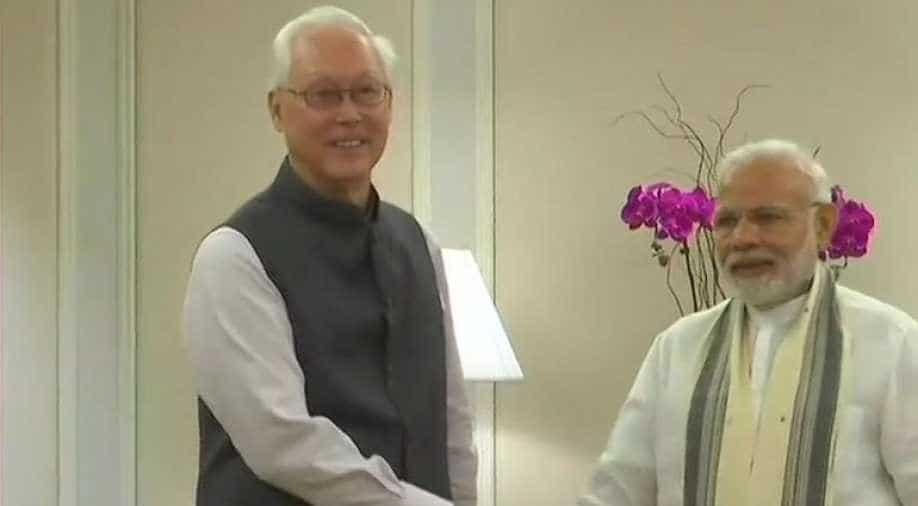 The two leaders held talks on issues of mutual interest.

ESM Goh has also served in several cabinet berths under the first Prime Minister of Singapore, Lee Kuan Yew and most notably as Senior Minister under incumbent Prime Minister Lee Hsien Loong's cabinet from 2004 to 2011.

In 2011, Prime Minister Lee appointed Goh as Emeritus Senior Minister. He is also a senior advisor to the Monetary Authority of Singapore (MAS), which is the country's central bank.

After the meeting, Prime Minister Modi will unveil the plaque marking the immersion site of the Father of the Nation, Mahatma Gandhi's ashes at Clifford Pier.

Prime Minister Modi will then hold a meeting with US Secretary of Defence Jim Mattis.

Mattis had served as the Marine Corps Reserve for over four decades before retiring in 2013. In January 2017, US President Donald Trump appointed Mattis as his defence secretary.

Next, Prime Minister Modi will visit the National Orchid Garden, which is located within the Singapore Botanic Gardens. It is the only tropical garden to be listed as a UNESCO World Heritage Site.

The Prime Minister will pay a visit to Chuliya Mosque, one of the oldest mosques of Singapore located in Chinatown. It has been the country's national monument since 1974.

Prime Minister Modi will visit the Sri Mariamman Temple, which is located nearby to the Chuliya Mosque and is the oldest Hindu temple in Singapore.

He will next visit the Buddha Tooth Relic Temple and Museum, also located in Chinatown. The temple gets its name from what the Buddhists regard as the left canine tooth of Lord Buddha, which was recovered from his funeral pyre in Kushinagar in Uttar Pradesh, according to visitsingapore.com.

After this, the Prime Minister will visit the Indian Heritage Centre, situated in Little India.

Lastly, Prime Minister Modi will visit by going to Changi Naval Base, where he will see the Indian Naval Ship (INS) Satpura and interact with officers and sailors of the Indian Navy and Royal Singapore Navy.

After these engagements, he will emplane for New Delhi, concluding his five-day visit to Indonesia, Malaysia and Singapore.

India and Singapore held a wide-range discussion on strategic and economic issues, technology and innovation during Prime Minister Narendra Modi's visit to the Southeast Asian nation, said the Ministry of External Affairs (MEA) on Friday.

"Discussions were held on strategic and economic issues and technology and innovation. Prime Minister Modi in his discussion to the leadership of Singapore conveyed our intention to play a balanced and constructive cooperative role in advancing peace and stability in the entire region," MEA Secretary (East) Preeti Saran said while briefing the media.

While addressing a keynote at the Shangri-La Dialogue on Friday, Prime Minister Narendra Modi called the Association of Southeast Asian Nations (ASEAN) bloc as "architecture of peace and security in the region" and an "example and inspiration" for international cooperation.

He noted that the Southeast Asian region has maritime and territorial, political, defence, and economic ties with India.

Further, referring to the significance of Indo-Pacific region, Prime Minister Modi said, "India stands for a free, open, inclusive region which includes all nations in this geography as also others beyond who have a stake in it."

The Prime Minister highlighted the deepening bilateral ties of India and China and said the world would be a better place if the two Asian giants work together in trust and confidence.

He said both the countries, which share a long and disputed boundary, have displayed maturity and wisdom in managing issues and ensuring a peaceful border as there "is a growing intersection in our international presence."

Later, Prime Minister Modi talked of the bilateral relations between India and the United States and said, "India's global strategic partnership with the United States continues to deepen across the extraordinary breadth of our relationship."

Terming Singapore as a "Gateway of India to the east", Prime Minister Modi said both India and Singapore shared multilateral ties in the fields of religion, culture, art and commerce, language and literature.

On the same note, he described the relations between India and Singapore as 'SAGAR' (Security and Growth for All in the Region).

The Prime Minister called on nations to collectively address mutual insecurities and terror threats being faced by the countries across the world and called for a collaborative effort in countering the challenges, including terrorism, being faced by the global community.

A total of 14 Business to Business (B2B) and Business to Government (B2G) were signed during the event at Marina Bay Sands Convention Centre in Singapore.

Prime Minister Modi landed in Singapore on Thursday, where he received a rousing welcome from the crowd.

Before Singapore, the Prime Minister visited Indonesia and Malaysia in a bid to enhance India's relations and engagements with the three countries, who are members of the ASEAN.