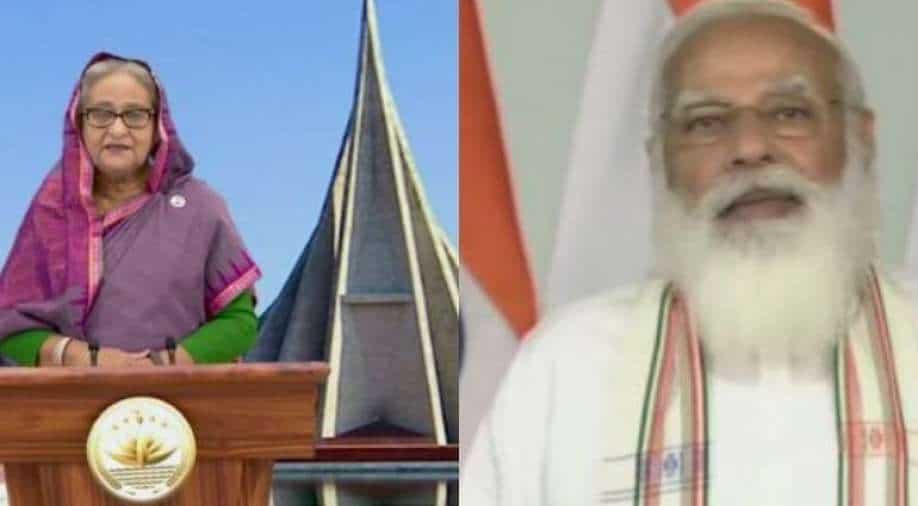 During the teleconference with PM Modi, PM Sheikh Hasina said the opening of any bridge is testimony to Bangladesh government's continued commitment to support our neighbour India in strengthening connectivity in the region, particularly for northeast India.

During the teleconference, Bangladesh PM Sheikh Hasina expressed gratitude for India's role in 1971 for providing shelter and refuge during the war.

"I believe political boundaries should not become a physical barrier to trade," the Bangladesh PM said.

"Opening of any bridge is testimony to Bangladesh government's continued commitment to support our neighbour India in strengthening connectivity in the region, particularly for northeast India," PM Hasina added.

The 1.9-kilometre bridge connects Sabroom in India with Ramgarh in Bangladesh.

"With the opening of the Feni bridge, Agartala will become the first Indian city closest to an international sea," India's prime minister added.

The construction was taken up by the National Highways and Infrastructure development Corporation Ltd at a project cost of Rs 133 crores.

With this inauguration, Tripura is set to become the "Gateway of North East" with access to Chittagong Port in Bangladesh which is just 80 kms from Sabroom, the government said.

On Monday,  India and Bangladesh had decided to move forward on a feasibility study for comprehensive free trade agreement to further economic ties between the two countries during a meeting of commerce secretaries.