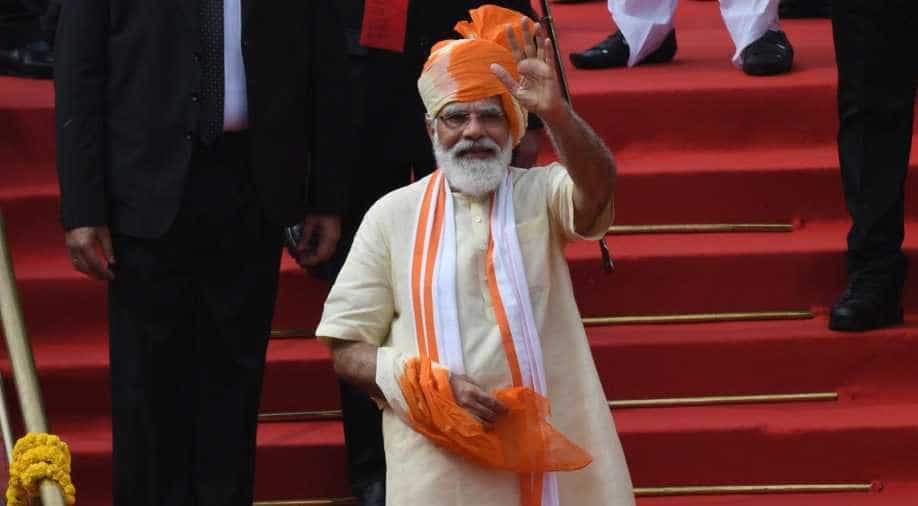 The off-white saafa with broad streak of orange had a long tail, imparting the prime minister a royal look for the I-Day ceremony.

Prime Minister Narendra Modi on Saturday continued with the tradition of sporting bright-coloured turbans for his Independence Day speeches, and chose a saffron and cream headgear for the second I-Day address of his second term, and seventh consecutive address from the ramparts of the Red Fort.

The off-white saafa with broad streak of orange had a long tail, imparting the prime minister a royal look for the I-Day ceremony.

The prime minister paired the 'saafa' with a half-sleeve kurta and a fitted churidar. He also wore a white scarf with a saffron border that he used to cover his mouth and nose in view of the coronavirus pandemic.

Last year, PM Modi sported a multi-coloured turban as he gave his sixth Independence Day speech after returning to power for a second term with a thumping majority.

For his maiden Independence Day in 2014, he had opted for a bright red Jodhpuri bandhej turban with green at the tail. In 2015, he chose a yellow turban covered with multi-coloured criss-cross lines, and a tie and dye turban in hues of pink and yellow in 2016.

The prime minister's turban for 2017 was a mix of bright red and yellow with criss-crossed golden lines all over. He donned a saffron turban for his appearance at the Red Fort in 2018.

From a bright red bandhani turban from Kutch to a mustard Rajasthani 'safa', Modi's eye-catching turbans have been a highlight of his Republic Day appearances too.

Known otherwise to witness a bustling crowd, the annual grand Independence Day event at the Red Fort was scaled down this year in keeping with prescribed safety protocols to contain the spread of COVID-19 that has wreaked havoc across the world.