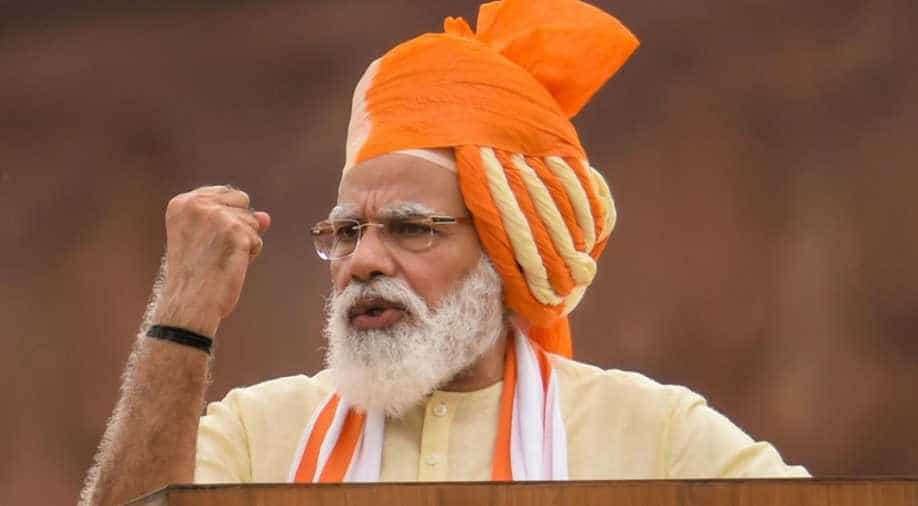 The coronavirus pandemic, security forces and 'Aatmanirbhar Bharat' were the centrepiece of Prime Minister Narendra Modi's Independence Day address as he presented a broad outline for spurring India's growth in diverse sectors.

In his seventh straight Independence Day speech from the ramparts of Red Fort, Modi made a host of new announcements on Saturday including the launch of a national digital health mission under which health IDs will be given to everyone, connecting all six lakh villages with optical fibres in 1000 days and promised the holding of assembly elections in Jammu and Kashmir after the delimitation exercise is over.

PM Modi also chose the occasion to deliver a warning to India's hostile neighbours saying the armed forces have given a befitting reply to those who challenged the country's sovereignty "from LoC to LAC" in their own language.

In a reference to the border row with China in eastern Ladakh, Modi said: "Respect for India's sovereignty is supreme for us and the world has seen in Ladakh what our brave jawans can do to maintain this resolve. I salute all those brave soldiers from the Red Fort."

"Whether it is terrorism or expansionism, India is fighting both with determination," Modi said.

India's freedom struggle, he said, became a challenge to forces of expansionism while attempts were made for hundreds of years by various rulers to root out India's culture and traditions.

In his 87-minute-long speech -- one of his longest addresses, PM Modi also touched upon the much-anticipated issue of vaccine for COVID-19 and said three vaccines are in various phases of trials in the country. He said that a roadmap is ready to innoculate all citizens at the shortest possible time with their mass production after scientists give a green signal.

The Independence Day function, this year, is relatively muted in terms of participation of people in view of the coronavirus pandemic.

To this end, PM Modi hailed the fight put up by "Corona Warriors" of the country -- medical professionals, police personnel and providing other essential services -- who have been relentlessly battling the coronavirus pandemic.

PM Modi said, “We can’t even count the number of nameless faces who have worked to fight against the coronavirus pandemic in these months. To these workers and Corona Warriors, I bow my head with humility.”

PM Modi also announced a National Digital Health Mission that would be conceptualised soon -- according to which every Indian citizen would get a health identity card.

"Every Indian will get a Health ID card. Every time you visit a doctor or a pharmacy, everything will be logged in this health card in your profile on a national scale. From the doctor's appointment to the medication advised, everything will be available in your health profile," he said.

FROM LAC TO LOC

India's soldiers have given a fitting reply to those who challenged the country's sovereignty "from LoC to LAC", PM Modi said.

"From LoC (Line of Control) to LAC (Line of Actual Control), whenever India has been challenged, our soldiers have given a fitting response in a language they understand," said the Prime Minister, in a strong message to both Pakistan and China."

Referring to the clash with China in June at Galwan Valley in eastern Ladakh, in which 20 soldiers died for the country, PM Modi said: "What our jawans can do, what the country can do, the world has seen in Ladakh. Today, I salute all those brave soldiers from the Red Fort."

The prime minister said the call for "Atmanirbhar Bharat" (self-reliant India) has captured people's imagination and become a "mantra" for everyone, as he pushed for raising India's share in global economy.

He also listed out a number of reform measures undertaken by his government which has resulted in a record Foreign Direct Investment (FDI) in the country last year.

Speaking of self-reliant India, he said many concerns are raised about it and acknowledged challenges ahead but asserted that there are "crores of solutions" offered by the country's citizens to "lakhs of challenges".
Vocal for local should be the mantra of the free India, he said.

He said his government has freed farmers of their contraints, and they can now trade their products freely at their terms.

India's freedom struggle, he said, became a challenge to forces of expansionism while attempts were made for hundreds of years by various rulers to root out India's culture and traditions.

The prime minister said the 'delimitation process' is underway in Jammu and Kashmir, adding that polls would be conducted soon in the Union Territory.

"Delimitation process is underway in Jammu and Kashmir. Once it is completed, an election will be held in the Union Territory. Jammu and Kashmir will have its own chief minister and ministers. We are committed to this," he said.

PM Modi announced that the task to connect India's over six lakh villages with optical fibre network will be completed in the next 1,000 days.

Besides, a high speed internet connectivity via submarine optical fibre cable will be extended to Lakshadweep in this period, he said.

Addressing the nation from the ramparts of the Red Fort on India's 74th Independence Day, he pointed out that only five dozen panchayats in the country were connected with optical fibre cable before 2014.

The prime minister also announced a new policy on cyber security to be unveiled shortly amid threats emanating from cyber space.

He said the country is witnessing expansion of roads and internet at unprecedented and rapid speed, from the peaks of Himalayas to islands in the Indian Ocean.

The prime minister said the new National Education Policy (NEP) seeks to strengthen research and innovation in the country to help it progress in a competitive world.

"Education has an important role to play in making India self-reliant, happy and prosperous. With this objective, we have been able to give the country a new education policy after over three decades," he said.

Approved by the government last month, the NEP replaces the 34-year-old National Policy on Education framed in 1986. It is aimed at paving the way for transformational reforms in school and higher education systems to make India a global knowledge superpower.

The prime minister also underlined the opportunity presented by the COVID-19 pandemic for the education sector in the form of online classes.

"Did anyone even think that online classes would reach our villages so quickly. Sometimes an opportunity can show itself even during a disaster. Online classes have become a culture during the times of COVID," he said.

PM Modi had, earlier in the day, extended greetings to the people of the nation. "Happy Independence Day to all fellow Indians. Jai Hind!" he tweeted from his official Twitter account.